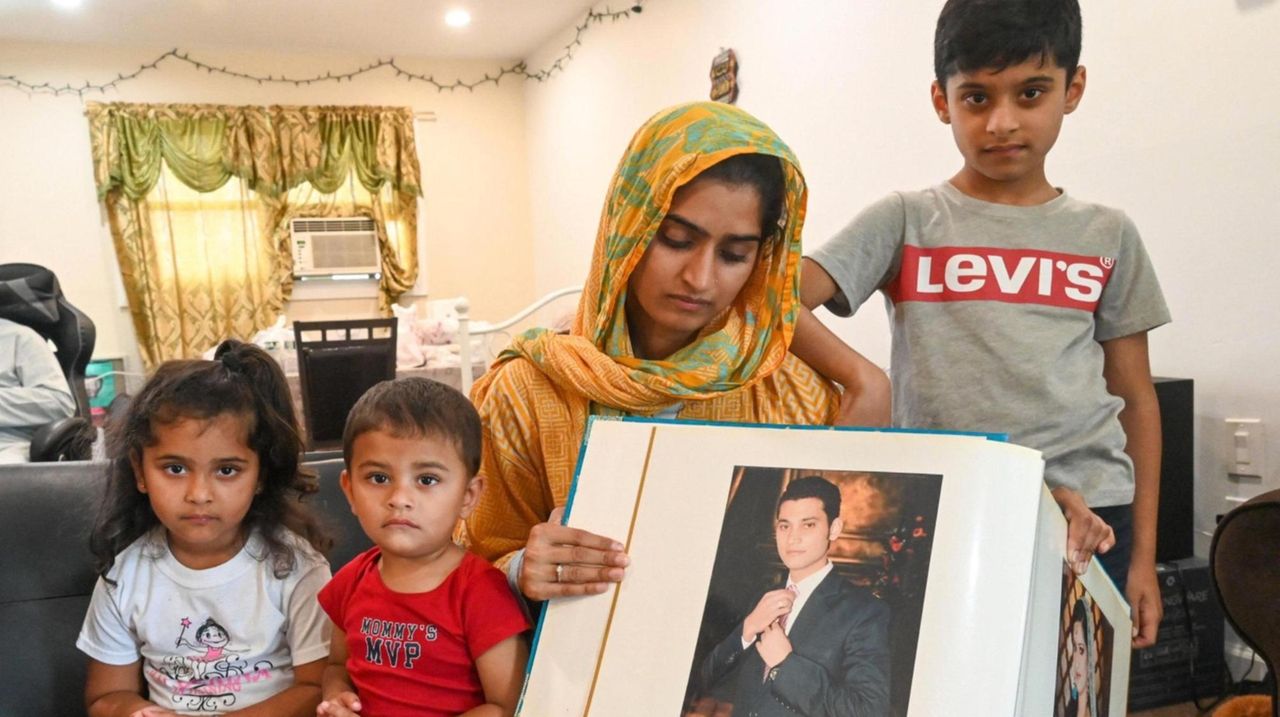 This story was reported by Robert Brodsky, James Carbone, Matthew Chayes, Vera Chinese, Faith Jesse and Keldy Ortiz. It was written by Brodsky.

The wife of an Uber driver killed Saturday with four other Long Islanders in a head-on crash in Quogue grappled Monday with how to tell her young children their father will never be home.

Hifsa Ahmad, of Bay Shore, said that since police arrived at her door Sunday morning with the devastating news that her husband, Farhan Zahid, 32, was among those killed Saturday night, she’s been peppered with questions from the children, ages 16 months to 6 years old about his whereabouts.

Ahmad said she is still searching for the right answer.

"The kids have been asking me since yesterday when their father is coming," Ahmad, 26, told Newsday Monday. "Why is he still at work? Why isn’t he coming? They really don’t understand."

In a span of less than 48 hours, a family lost a father, husband and its sole breadwinner.

Zahid, an Uber driver for the past two years, was shuttling four passengers in his Toyota Prius at 11:15 p.m. Saturday on eastbound Montauk Highway near Quogue Street when a Nissan Maxima, traveling west, crossed the centerline and collided head-on with the sedan, Quogue police said.

The driver of the Maxima, Justin B. Mendez, 22, of Brookhaven, who police believe may have been speeding, was also killed in the crash.

The Quogue Police Department said they will provide an update about the investigation on Tuesday.

Zahid and Ahmad were both born in Pakistan, where they married seven years ago. Ahmad moved to Long Island, where much of her family lives, 13 years ago. She brought her husband to the United States five years ago and they eventually carved out a life in Bay Shore.

Ahmad stayed home to raise their children — son Ayan, 6, daughter Mishal, 3, and son Ahaan, 16 months — while preparing to open a beauty parlor in the hamlet next month.

Her husband, meanwhile, found work as an Uber driver. They were planning to return to Pakistan in October for the wedding of Zahid’s sister. Instead, Zahid’s family is traveling to the U.S. for his funeral.

"I have no support; he was working; he was the only one," Ahmad said as she broke down in tears. "He was a good partner. A good husband. He was really nice."

In a statement, Uber said its "thoughts are with the families of Mr. Zahid and the four others who lost their lives in this heartbreaking crash, and we hope the survivor makes a full recovery."

Farrell’s family declined to speak with reporters Monday. Relatives of Maglio and Mendez were unavailable for comment.

James Farrell and Kiess were classmates from elementary school to high school and played lacrosse together.

Standing 6-foot 3, Ryan Kiess was a "gentle giant," his father, Kurt Kiess, said Sunday of his middle child. "He died with two of his friends … He loved Brianna. He loved his family, friends and the community."

Ryan Kiess and Maglio met at the University of Scranton, where they played lacrosse and had been dating for six years, the Kiess family said. Kiess was recently promoted at the accounting firm KPMG. Maglio is a nurse at NewYork-Presbyterian Hospital in Manhattan.

Kurt Kiess said Monday he saw Maglio "as a daughter" and that he visited her in the hospital, "kissed her on the forehead and was holding her hand and praying."

Manhasset Secondary School Principal Dean Schlanger said he’d known the Farrell brothers and Ryan Kiess, as well as their families, for years. He called the crash an "unthinkable tragedy." Flags at Manhasset district schools will remain at half-mast this week and grief counseling will be available at Shelter Rock Elementary School Tuesday, officials said.

"These boys come from beloved families who are extremely connected and valued members of our community," Schlanger said. "All three of them were fun, bright and well-rounded gentlemen both on and off the playing field and will leave a profound and positive impact on our school community."

Don Benvenuti, owner of Villa Milano, an Italian restaurant in Manhasset frequented by the three young men, described them as well-mannered and carefree.

"I guess God needed more angels up in heaven because these boys were definitely a mark for angels," he said.

Benvenuti said the Manhasset community will rally around the families with assistance, both financial and emotional.

"Let's grieve together and provide support to the families," he said, "not just now but for years and years to come."

Speed probed as factor in head-on Quogue crash that killed 5Both drivers died, as well as three former Manhasset lacrosse players — two of them brothers — in the collision on Montauk Highway. A sixth person was critically injured.