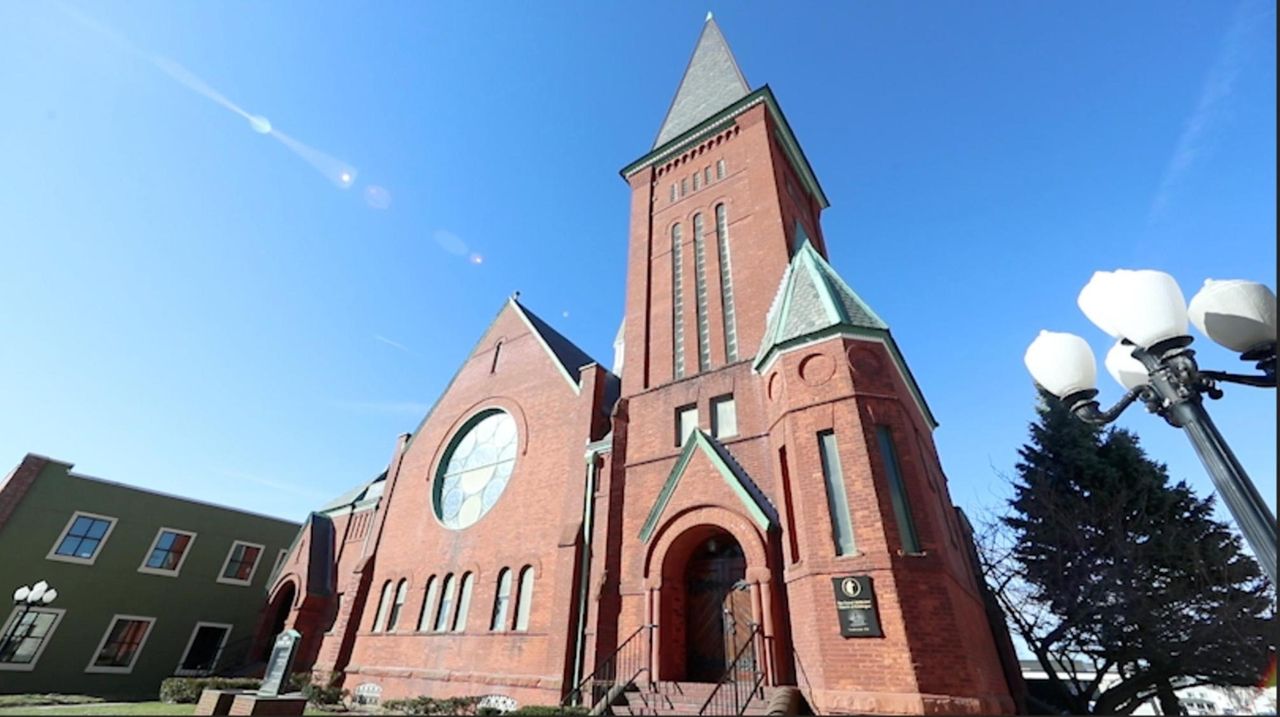 Rev. Charles Ferrara of The United Methodist Church of Patchogue explained on March 24 why parishioners are turning to the public to help save their historic building from water damage and decay. The church needs $350,000 for emergency repairs to its redbrick home at South Ocean Avenue and Church Street.  Credit: Randee Daddona

Parishioners at a church founded when George Washington was president are turning to the public to help save the historic building from water damage and decay.

The United Methodist Church of Patchogue needs $350,000 for emergency repairs to its redbrick home at South Ocean Avenue and Church Street, said the Rev. Charles Ferrara.

Roughly $2 million is what the congregation estimates it would cost to fully restore the soaring Romanesque Revival structure, described by Mayor Paul Pontieri as a landmark in the village.

“Coming down Ocean Avenue, it absolutely jumps right out at you,” Pontieri said. “It’s a mainstay. It’s part of what makes us who we are as a community.”

Historic Patchogue church in danger of ruin Rev. Charles Ferrara of The United Methodist Church of Patchogue explained on March 24 why parishioners are turning to the public to help save their historic building from water damage and decay. The church needs $350,000 for emergency repairs to its redbrick home at South Ocean Avenue and Church Street.  Credit: Randee Daddona

Rain and snow over the years have leaked through the bricks, doing an assortment of damage — from rotting ceiling timbers to buckling walls to eating plaster down to the wood. Two 16-foot-wide, round Tiffany stained-glass windows are even in danger because of stress on the walls.

“No matter how beautiful it is, it is subject to deterioration,” said lay leader Barbara Becker.

The church was in existence for nearly a century before moving into the building in 1891. The federal government added the structure to the National Register of Historic Places in 1984.

Built in the distinctive style of Methodist churches near the turn of the 20th century, the building has an elegant theater-like sanctuary with seats that rise higher going toward the back and a balcony overlooking the sanctuary, said Ann Friedman, director of the Sacred Sites Program for The New York Landmarks Conservancy.

On one side of the sanctuary is an atrium with sliding doors on the second floor that were opened for Sunday school students to listen to the pastor’s homily, she said.

The conservancy has given $20,000 to defray the cost of the repairs. The church is one of 16 sites in New York State that received a total of $241,500 in grants from the Sacred Sites program, one of only a handful in the country that assists landmark religious institutions, Friedman said.

The conservancy made the grant not only because of the building’s beauty and historical significance, but because the church serves as a critical supplier of social services, Friedman said.

“It’s important because it is not just a house of worship,” she said. “It’s also really an incredible community resource.”

The church provides about 6,000 meals a year to the needy, Ferrara and parishioners said. It hosts English as a second-language classes, a Head Start program, Alcoholics Anonymous meetings, a food pantry and a donated-clothing room. An Hispanic Evangelical congregation also uses the building.

“This is a downtown, mission-oriented church,” Ferrara said. “We would be missed if this church was removed today.”

Besides the conservancy grant, the church has received $65,000 in contributions and pledges from its 250 parishioners; $50,000 from the Knapp Sweezy Foundation, a Patchogue-based charity; and a $125,000 loan from the New York Annual Conference, which governs the denomination at the state level, Ferrara said.

“Anything we can do as a community to save it is of the utmost importance,” Pontieri said. “It is one of the most beautiful churches in the community.”