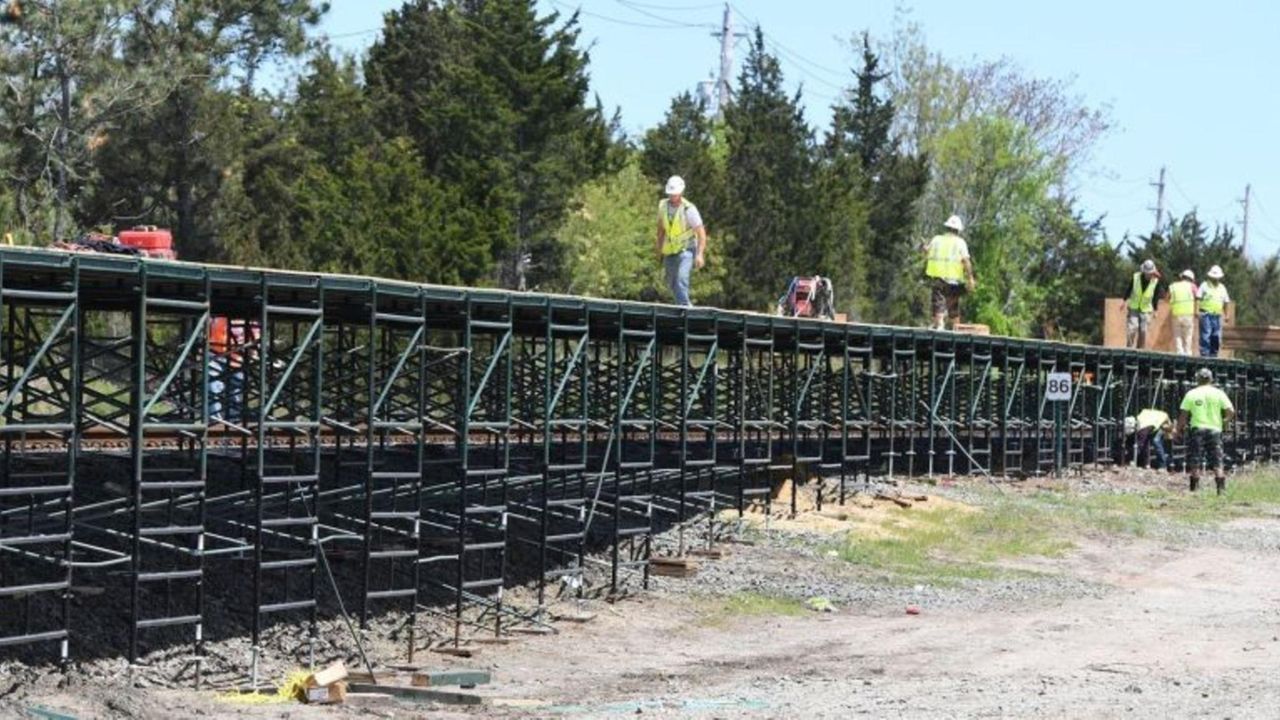 For some spectators at the U.S. Open golf tournament, the draw of shopping, food and other fan experiences may be on par with the main event in Southampton next month.

A temporary Long Island Rail Road platform, air-conditioned tents with 37,000 square feet of retail space, and viewing stands several stories tall are being built at and near Shinnecock Hills Golf Club, the home of the 118th U.S. Open.

The U.S. Golf Association opened up the event space on Monday for a sneak peek of what fans can expect during the tournament June 11-17.

Fans can arrive at the event via Long Island Rail Road, ride-sharing service, Hampton Jitney or car, said Katie Bynum, director of partnerships and championship experience. They will go to the Stony Brook Southampton campus and walk over a recently installed pedestrian bridge to cross County Road 39 to get to the course.

Those who drive will have to park at Francis S. Grabeski Airport in Westhampton Beach or at the Hampton Classic showgrounds in Bridgehampton and board a shuttle to the event.

Once inside the event grounds, fans will find the merchandise tent, where they can purchase golf-themed apparel and home décor, and local items such as “Shinnecock fescue breeze” scented candles from the Hamptons Handpoured company.

The merchandise shelves were bare on Monday but will soon be stocked with 400,000 pieces of memorabilia, said Mary Lopuszynski, director of merchandising operations.

“We’ll hopefully do 125,000 transactions in 11 days and then go out of business,” she said. The tent will open June 7, four days before the event officially kicks off, and close when the tournament ends. It will take until mid-July to remove the tent from the site, she said.

The U.S. Golf Association is partnering with corporate sponsors to offer fan rest areas and 360 degree virtual reality tours of the Shinnecock clubhouse and trophy room. Other attractions include social media-friendly photo opportunities and a program that will let fans send a greeting to dad in honor of Father’s Day.

The USGA will sell several tiers of tickets, including the “Top of the Hill” tickets offering access to a beer garden overlooking the 12th and 13th holes, Bynum said.

“I promise you there is something for everyone here,” Bynum said.

Suffolk to open camp sites for U.S. Open visitorsSuffolk County is opening 376 campsites to out-of-towners at four county parks near the U.S. ...