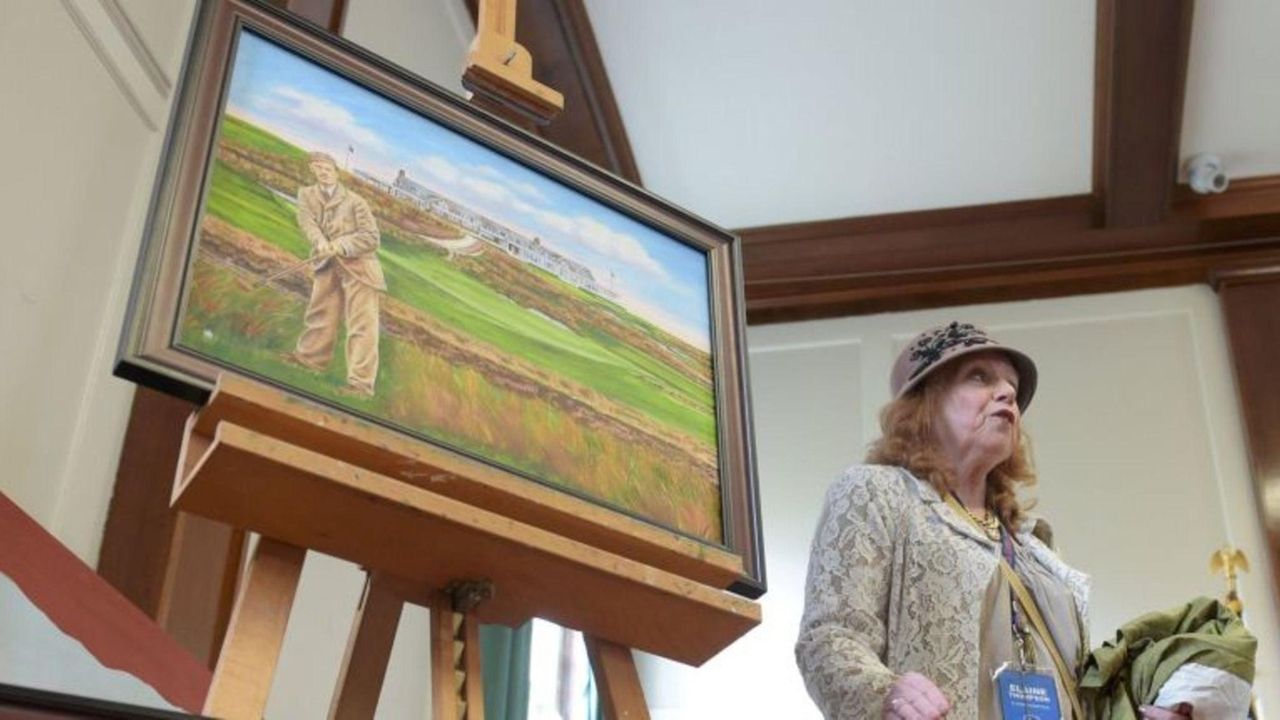 Artist Elaine Thompson couldn’t help but note the family resemblance between the inspiration for her latest portrait “Shinnecock 18th Hole and Willie Davis” and one of his descendants who came out Sunday for the painting’s unveiling.

“You look like him,” she exclaimed to Davis’ great-grandson Larry Sheridan, whose body type and facial hair evoke the man who designed the original 12 holes at Shinnecock Hills Golf Club.

“It must be the mustache,” said Sheridan, of West Sayville.

Sheridan, Thompson and more than 100 others gathered Sunday at the Bellport Community Center for the presentation of the portrait created for the 118th U.S. Open golf championship at Shinnecock Hills, which is set for June 14 through 17.

In 1891, Davis designed what was then a 12-hole course, the first “formalized” golf course in America, according to a history of the club published as a book in 1991. Still, that feat was frequently attributed to Willie Dunn, who designed holes 13 through 18 several years after the course opened. It wasn’t until 1986, when the U.S. Golf Association’s museum staff uncovered new evidence of the course’s designer, that Davis began to get credit.

That reason, in part, was why Thompson, of Bohemia, chose to include the designer in the foreground of her portrait, an 18-by-24-inch oil painting that features the course’s clubhouse in the background.

“In that book, it said the designer of that course didn’t get enough credit,” she said. “I said, ‘I have to use him.’ ”

Davis’ legacy was a point of pride for his granddaughter Esther Martensen, who died in December, according to her grandson Robert Kucharski, of Meriden, Connecticut.

“We’ve always known [about Davis’ legacy],” said Kucharski, Davis’ great-great-grandson who also attended the unveiling. “It’s been fun to get the history out there.”

Ed Wankel, a former deputy state parks commissioner who helped connect Thompson with the USGA in 2002, said he enjoys the realism of her work.

Fine-art prints for this year’s painting will be available for $99 at the event’s merchandise tent, Thompson’s home gallery and other locations. A limited number of artist’s proofs will be offered for $199.