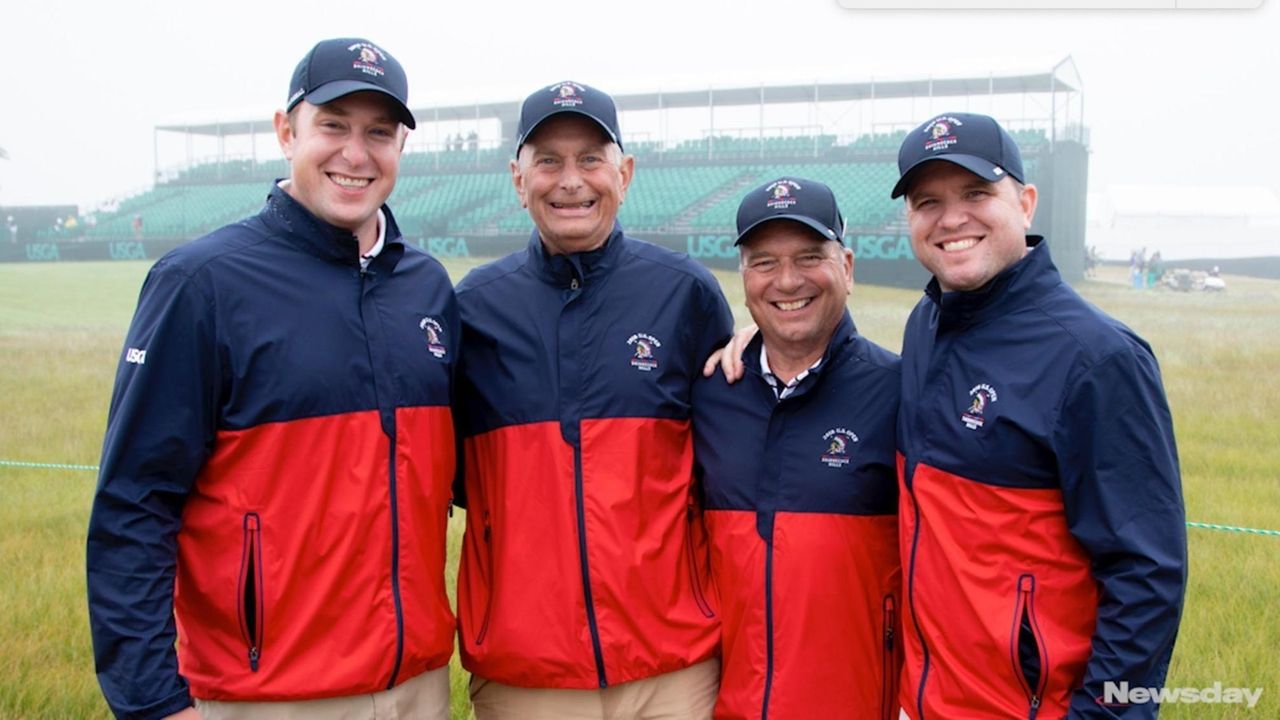 The Schartners and Downings are father-son teams volunteering this week at the U.S. Open at Shinnecock Hills Golf Club in Southampton, keeping alive a tradition for both their families that's more than a decade old. Credit: Newsday / Yeong-Ung Yang

Walter Schartner and Glenn Downing don’t see their adult sons often, but one place they always look forward to spending time with them is on the greens — as volunteers.

The Schartners and Downings are working this week at the U.S. Open at Shinnecock Hills Golf Club in Southampton, extending a family tradition begun more than decade ago.

“Honestly, volunteering with your son Father’s Day weekend, it really doesn’t get much better than that,” said Schartner, 67, a St. James resident. His son, Mark, 35, lives in Morristown, New Jersey.

For father-son pairs like the Schartners and Downings, the U.S. Open — which culminates on Father’s Day weekend — is more than just being elbow to elbow with golf greats. To these men, working as volunteers is the next best thing to playing a sport they have loved since they were children.

“Volunteering is a great way to spend time with my sons and share in the history of this wonderful sport,” said Downing, 68, also of St. James.

Downing and Schartner, retirees and best friends of 25 years, spend much of their free time playing golf. They’re members of Smithtown Landing Men’s Golf Association, which is assigned a hole at the contest.

The Downings and Schartners met Wednesday at the 17th hole at Shinnecock Hills Golf Club in Southampton, where they will work five- to six-hour shifts. The men work as marshals, assisting in gallery control, helping the players move around the course and looking for errant shots.

A love of the game is the only requirement for most volunteers, according to Nick Schilling, assistant manager of the 2018 U.S. Open.

This year, 4,500 volunteers, mostly men, will work throughout the seven-day competition, Schilling said. The weeklong credential granting access to the Open — valued at $500 — is among the biggest perks of volunteering, he said.

Volunteers are selected on a first-come, first-served basis. Applicants generally must be at least 18 years old. Standard-bearers, who carry boards to inform spectators of the golfers’ score, must be at least 14.

The application period lasted from January 2017 to last month, but most positions had been filled by December. Past experience is a requirement for only some of the 20 volunteering committees, such as walking scorers. Other committees include admissions and caddie services.

Those selected must pay a $175 fee to cover a volunteer package that includes designer apparel by Ralph Lauren (two golf shirts, a windbreaker and one piece of headwear), lunch vouchers and a water bottle, Schilling said.

This year, about half of the volunteers will be working for the United States Golf Association for the first time, according to Schilling. About 12 percent have volunteered at five or more USGA Championships, Schilling said.

Like Mark Schartner, Downing’s son, Tim, traveled to Long Island on Tuesday night on the eve of their first shift. Tim Downing, 40, a director with Takeda Pharmaceutical Co., flew from Wilmette, Illinois, about half an hour north of Chicago.

When they’re not working, this foursome will be taking in the competition.

Mark Schartner, 35, and Downing’s other son, Derek, 36, grew up golfing together. Derek was unable to volunteer this time due to work commitments.

The Schartners volunteered at the 2004 U.S. Open at Shinnecock Hills and in 2009 on the Black Course at Bethpage State Park. Downing has volunteered with either or both of his sons since the tournament was held at Bethpage in 2002.

Mark Schartner, a math teacher and golf coach at West Morris Central High School in Chester, New Jersey, said what attracts him to golf is the solitude of the sport. As someone who has played team sports competitively, he said golf’s individual achievement and mental challenge have kept him teeing up for the past 28 years.

“You’re kind of playing against yourself, trying to beat your previous score,” Mark Schartner said. “Especially as you get older.”

None of the men believe they sacrifice enjoyment of the event as a spectator by volunteering.

“It’s always neat to be inside the ropes at a major championship with your dad,” Tim Downing said after his shift Wednesday, where he had an unobstructed view of the top golfers.

In 2004, Glenn Downing and his sons met their favorite player, Phil Mickelson, while working at the previous Open held at Shinnecock.

“Phil spoke with a small group of us after a practice round for over an hour,” Glenn Downing said. “For him to take the time to answer our questions and tell stories endeared us to him.”

This experience is one Mark Schartner said he won’t soon forget.

“My dad has been such a huge part of my life — he taught me the game of life,” Mark Schartner said. “To get to share this with him is special.”