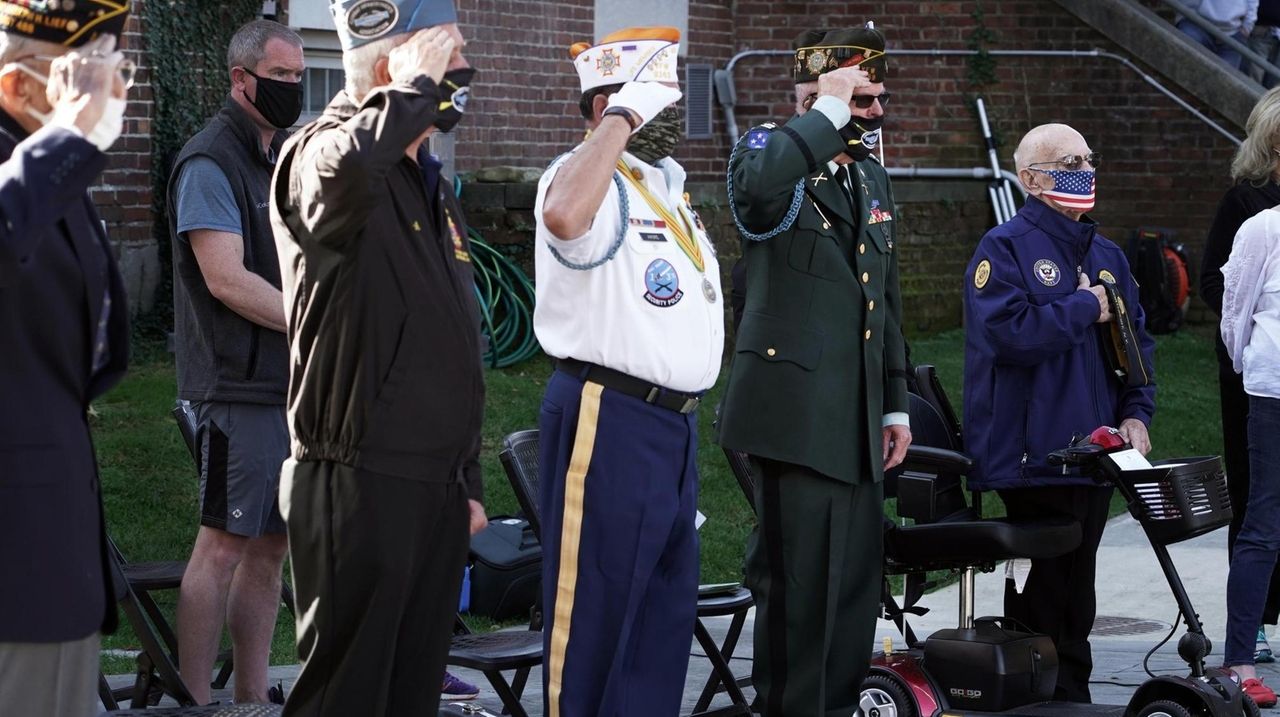 The Town of Huntington held a Veterans Day Ceremony in Veterans Plaza in Huntington on Sunday. Credit: Debbie Egan-Chin

Mortimer Roberts, of East Northport, who served with the United States Naval Air Force in World War II, said Sunday that Veterans Day means "everything" to him.

"All my friends that were in the service with me, some of them passed on — most of them passed on," Roberts said in Huntington before a service to honor veterans like him. He said he was thinking about "all the fellas that I was with."

The Town of Huntington held the Veterans Day Ceremony on Sunday. The event was limited to 50 attendees "who pre-RSVP’d to ensure the service would adhere to New York State limitations on public gatherings," during the coronavirus pandemic.

The ceremony was yet another annual tradition altered in 2020 as typically large public gatherings have become public health risks. Parades and ceremonies of all sorts have been canceled, and even certain honors at military funerals were postponed earlier in the year, at the beginning of the pandemic.

Chad A. Lupinacci, the Huntington town supervisor, said that about 365 new names were to be added to Huntington World War II memorial, and there are about 6,000 names currently. The new names, he said, will "ensure every Huntington resident who served is recognized."

There had been an unveiling ceremony planned for June, which had to be postponed "until we can gather in large numbers for this momentous occasion," Lupinacci said on the front lawn of Town Hall.

"Thank you, from the bottom of my heart," he said, adding: "America would not be what it is without the commitment of our veterans to our nation and our citizens."

Roberts still remembers when Veterans Day was called Armistice Day. The name was changed to Veterans Day in 1954 to honor all who had been in the military, not just at the end of World War I.

"It’s great seeing all these young fellas around," Roberts said Sunday, "and old fellas around — still around."