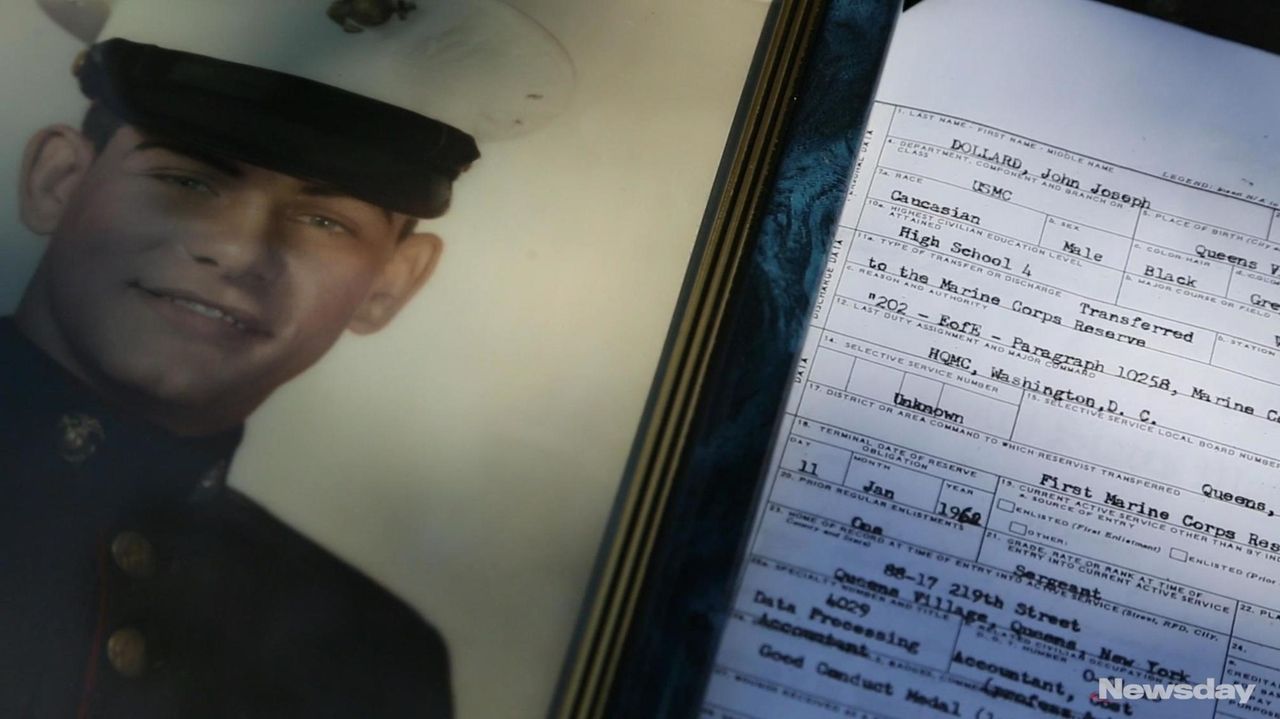 John Dollard, 83, a retired NYC police officer who had served as a Marine sergeant for 40 months, lost the rank of sergeant after a 1959 decision by the Marine Corps and was classified as a corporal. Now, with help from Rep. Lee Zeldin and others that decision has been overturned. Credit: Barry Sloan

John Dollard, 83, who spent more than three years serving as a Marine Corps sergeant in the 1950s, had hoped that “Sgt.” would adorn his gravestone at Calverton National Cemetery when his time comes.

But a reconfiguring of the technical requirements of his rank imposed shortly before he left the service in 1959 meant that he might forever be considered as having only attained the next lower military grade.

Dollard, who for a while commanded a security detail at U.S. Marine Corps Headquarters overlooking Arlington Cemetery, worried that he might spend eternity being known as a corporal.

But thanks to the intervention of a volunteer attorney at a Touro Law Center legal clinic, the Medford resident will be entitled to have his highest rank inscribed on his tombstone after all.

“I was the senior sergeant in my barracks, and I was sergeant of the guard at Marine Corps headquarters,” said Dollard, who regularly attends burials at area veterans cemeteries. “That’s what really bothered me the most, the fact that I would be called a corporal.”

The nation’s 135 military cemeteries are administered by the Department of Veterans Affairs, which generally inscribes grave markers in accordance with the rank noted on a veteran’s “DD 214” discharge papers.

But the Department of Defense has periodically adjusted rank and pay structures to conform with changing regulations and congressional statutes. It did so in 1954, 1959, and again in 1960.

Dollard’s loss of rank came about as the Pentagon was in the process of adopting new specifications that went into effect on Aug. 1, 1960. A Jan. 1, 1959 edict allowed Marines like Dollard, who had not fully met the requirements of the new rank structure, to continue serving in their rank under the old requirements until they had a chance to meet the new ones.

But Dollard was honorably discharged on Aug. 10, 1959, before he had an opportunity to fulfill the new requirements. Dollard’s discharge papers were marked “Cpl (E-4).”

With military life behind him, and civilian opportunities to pursue, none of this bothered him much in the years that followed.

He got a job in data processing, worked for movie maker Metro-Goldwyn-Mayer, joined the New York City Police Department, then went into business for himself for 18 years, running the Drake Motor Inn in Hampton Bays. He retired in 2002.

But as his involvement in veterans activities grew — he is the former commander of the American Legion Post 1545 in Eastport — he began pondering his own place in eternity. The issue was not one of benefits or money, since a change in his discharge status would have no bearing on those.

“I go to a lot of burials, and I’m looking at the headstones and thinking, ‘I’m going to be buried here as a corporal after I performed to the best of my abilities as a sergeant for 40 months?’ ” Dollard said. “And I said to myself, ‘That’s not right.’ ”

“After further review . . . it is clear that Mr. Dollard was rightfully promoted and satisfactorily served at the rank of Sergeant, pay grade E-4,” Upton wrote in a March 19 memo. Upton could not be reached for comment.

“In fact, Mr. Dollard was afforded the title, insignia, and privileges of Sergeant on his last day of active duty,” Upton wrote.

Bruno said although he had never handled a case like Dollard’s, he believes the 1959 rank-structure adjustment that entangled Dollard may mean there are other old Marines on Long Island who face going to their grave with a lesser rank than they deserve.

“She told me she has seen this kind of request many times, but rarely grants it,” Bruno said. “But she granted it, and we’re grateful.”

“They did the right thing,” said Dollard, whose efforts to revise his military records began in 2007. “But it wasn’t easy.”