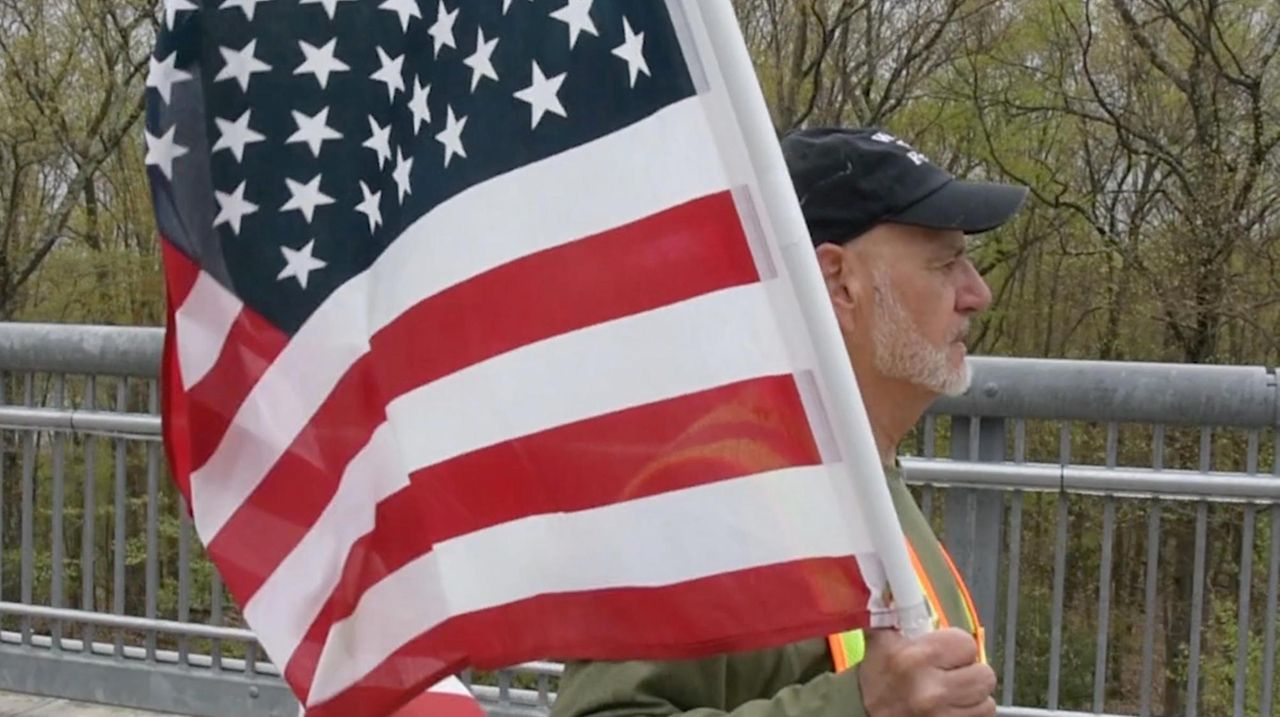 Frank Romeo has struggled with his emotions for the past 50 years, ever since he was nearly cut down by rifle fire in Vietnam.

Anxiety. Isolation. Anger. All symptoms of PTSD, short for post-traumatic stress disorder. What countless other veterans experience, too.

Now, the Bay Shore native is doing something extraordinary to help other New Yorkers understand the fallout from war. He's walking nearly 800 miles — the length of the state — to raise awareness about veteran mental health.

Romeo left Buffalo on March 1, his 70th birthday, passing the ice-choked Niagara River that first day. In late April, he was trudging through the Hudson Valley, green with springtime. He expects to arrive back home in Bay Shore on June 1, just in time for beach season.

As he has worked his way downstate, he has stopped at veterans centers, homeless shelters and high schools. And he has spent hours thinking about — questioning — society's attitudes about mental illness and the help that veterans with PTSD are getting.

“We have all of these programs all over the country, but I ask, are they working?” Romeo said in late April on a pathway overlooking the Hudson in the Ulster County hamlet of Highland.

“If they were working, we wouldn’t be having 22 veterans suicides every day in America, or have veterans be one in four homeless Americans,” he said. “We have to rethink our approach to mental health for veterans.”

Romeo has worked hard to defy the odds of survival. But he also talks about how the disorder shaped his life, how his mission is to talk about the vulnerability of service members and their mental health needs.

At stops along his trek, Romeo stresses the importance of alerting young people about the psychological trauma that war can inflict.

He has made special efforts to connect with high school students. When he met with state legislators during an April 8 stop in Albany, for example, Romeo livestreamed his remarks to students at Bay Shore High School.

“We have an opportunity to get the perspective of an individual who went to that war and who is suffering from that war,” Sen. John Brooks (D-Seaford) said on the chamber's floor.

Romeo can pinpoint what stirred his PTSD — that near-death experience of being cut down by rifle fire.

It was 1969. He was two years out of Bay Shore High School, serving with the 199th Infantry Brigade (Light). Somehow, he ended up separated from his platoon during an ambush in the Mekong Delta.

The attack left Romeo riddled with bullets. He slipped in and out of consciousness for the first month of a yearlong recuperation in a string of military hospitals stretching from Japan to Queens.

"I realized something was wrong before I even left the military," he said. "I began experiencing signs of PTSD behavior, got into trouble, went to military prison and was discharged from the military from a prison cell.”

Romeo was diagnosed with depression, then Vietnam War Syndrome — what PTSD was called at the time. His diagnosis was changed to PTSD after the American Psychiatric Association recognized the condition in 1980.

Three years later, Congress asked the Veterans Administration, now called the Department of Veterans Affairs, to study PTSD in the more than 3 million Americans who served in Vietnam.

The findings of the study, released in 1987, found that up to 15 percent of Vietnam veterans had PTSD, which has been linked to homelessness, substance abuse, troubled marriages, violence and early death.

For two decades, Romeo buried his feelings. But he couldn't hide the toll they were taking: Lots of what he describes as menial jobs. Drug abuse. A broken family.

Then, a breakthrough when Romeo took up painting as part of his PTSD therapy at the Northport VA Medical Center in Northport.

"I began creating PTSD artwork and collecting other veterans' artwork and traveling around the country teaching it and helping others," he said. "That was 30 years ago and I haven’t stopped since. “

His images convey the anguish of PTSD. One depicts a grievously injured soldier walking with the support of comrades, whose faces are skulls. Another is a grief-stricken woman holding a telegram from the Defense Department.

Last year, the Bay Shore school district and Romeo collaborated on a section in the 11th-grade social studies curriculum about war from the perspective of soldiers throughout history. Course material includes letters sent home from the battlefield.

Several students in the district have followed Romeo’s walk through a blog and video messages on his “Walk With Frank” website walkwithfrank.org, said Joseph Lemke, who directs social studies for the district.

“The reaction of the kids has been incredible,” Lemke said. “They were able to make connections between what they learned in class with a human being they can relate to.”

Romeo believes a greater public awareness of who soldiers are and what the psychological trauma they face in war could go a long way in the battle against PTSD.