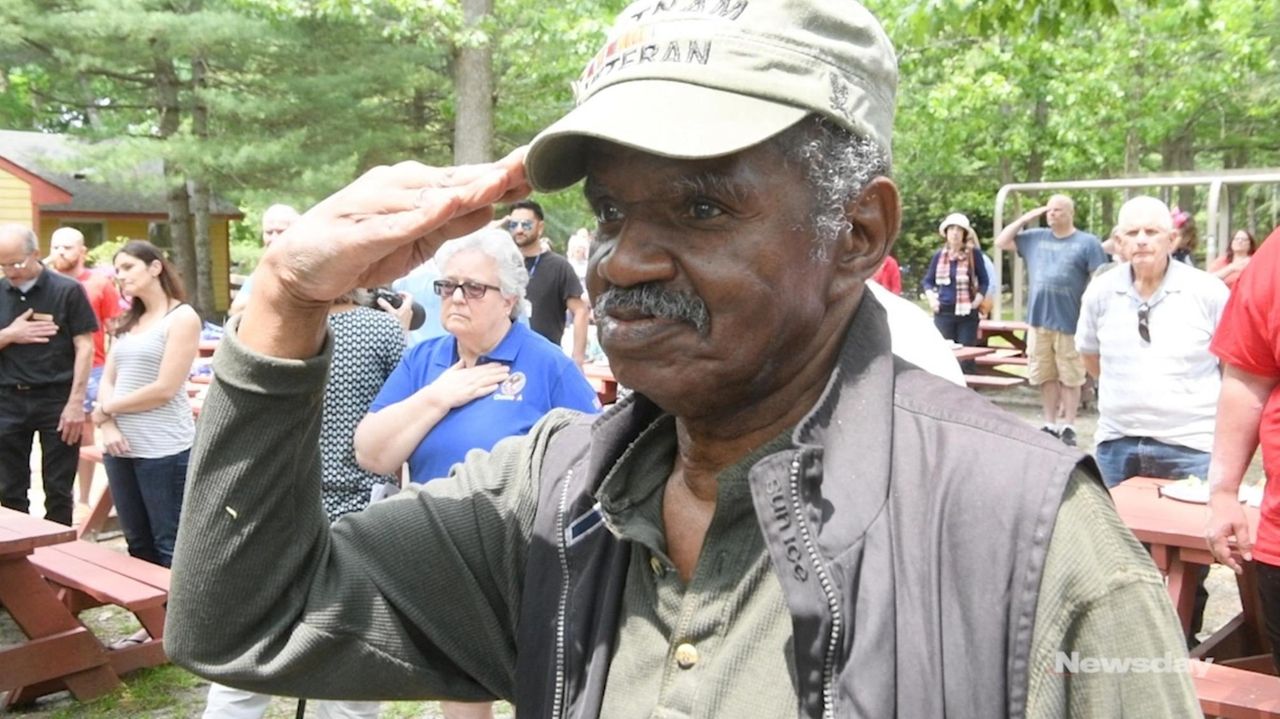 About 200 veterans and their families gathered from across Long Island at Saturday’s sixth annual Joseph P. Dwyer Veterans Peer Support Project in Center Moriches, where they received acupuncture and massages, participated in yoga and learned about other alternative treatments for general stress and post-traumatic stress disorder. Credit: Todd Maisel

About 200 veterans and their families wandered the grounds of Camp Pa-Qua-Tuck, learning about veterans services available on Long Island and additional approaches to treating PTSD, depression and other issues many face when transitioning back to civilian life.

“We found that there are holistic disciplines of wellness treatments that can complement traditional medical and mental health care,” said Dwyer Project program director Marcelle Leis. “We have a plethora of services here to help veterans with whatever they need.”

Russell Keyzer, 42, of Ronkonkoma, has used Dwyer Project services for a couple of years. After serving in the National Guard, Keyzer developed PTSD, alcoholism and drug addiction, which led to a “downward spiral” that left him homeless, he said. The Hauppauge-based organization was one of many support groups that got Keyzer back on his feet, helped him attain Artemis, his service dog, and introduced him to peer-to-peer counseling.

“We need more of this so vets get proper care,” Keyzer said. “What happened to Joseph Dwyer, that was almost me.”

Dwyer served in the Army in Iraq and struggled with PTSD for years. He died in 2008 of a drug overdose. In 2012, Rep. Lee Zeldin (R-Shirley) — then a state Senator — started the Dwyer Project to help service members dealing with PTSD or reintegration issues through peer mentorship.

On Saturday, Paws of War, a Nesconset-based nonprofit, discussed how veterans could receive service dogs. Acupuncturists from Eastern Sun Holistic Health in Southold gently slid pins into ears, ankles, wrists and between the eyes to help with relaxation.

Robert Reilly, 73, of Bohemia, a Vietnam vet, had never received acupuncture before but said he felt relaxed after resting with about 10 needles poking out of him.

Down by the lake, Eileen Shanahan led demonstrations on equine therapy and horse interaction. She instructed Mack McManus, as he held a horse’s reins, how to tell the animal to slowly retreat and then come forward.

John Damato, 56, of Levittown, came to relax with his service dog, Meyers, a 2-year-old golden retriever, yellow Labrador mix. The former member of the military police enjoyed a free lunch, got a massage and got to know some of his fellow veterans.

“It’s nice to get away from everything and enjoy the camaraderie,” Damato said.