Addison Kramer, 5, of Manorville, left, and her brother Gregory, 4, with their dog Darby, try on a pair of life jackets on Tuesday, July 25, 2017 that are available to borrow for free at a Sayville ambulance company. Credit: James Carbone

Children, adults, and even the family dog now have access to life jackets on loan the next time the urge strikes to take a dip in the waters off Sayville, according to safety effort announced in the hamlet Tuesday.

The life jackets can be borrowed for free, according to officials with the Suffolk police department, a Sayville ambulance company, and a 24-hour veterinary clinic, who announced the program Tuesday.

Even though there is no charge to sign out a life jacket, the benefits they offer are priceless, said Dr. George Kramer, a veterinarian who took part in a Sayville news conference to announce the loaner program.

“In emergency situations, you never know how long you have to swim,” said Kramer, the chief of staff at the Bohemia-based Atlantic Coast Guard Veterinary Specialists. “To have this kind of program to be able to protect your children and pets at no cost I think is awesome.” 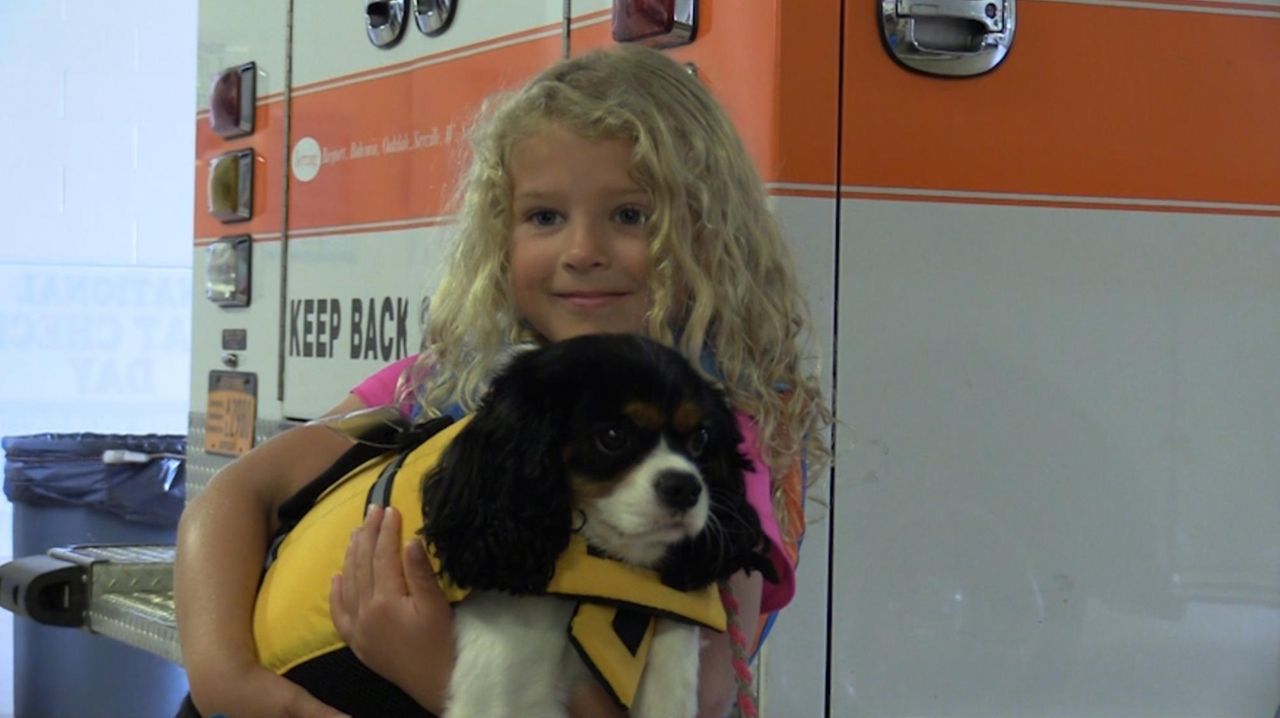 Life jacket loaner program for people and dogs On Tuesday July 25, 2017, the Suffolk County police commissioner, Sayville's Community Ambulance Company and Atlantic Coast Veterinary Specialists of Bohemia announced a loaner life jacket program where the public can borrow life jackets free of charge. There will be 20 life jackets for infants to adults and 10 for dogs available for use per day or over weekends. Credit: James Carbone

Kramer said it’s a misconception that pets are born with an ability to swim; they are just as susceptible to the water dangers as humans.

“With pets, people just intuitively think that they know how to swim, but they do fatigue easily and there are strong currents,” said Kramer, whose children, Gregory, 4, and Addison, 5, and family dog Darbie, could be seen wearing the jackets nearby.

Suffolk Police Commissioner Timothy Sini said anyone looking for proof of the importance of life jackets just needs to talk to a first responder who arrived at a water rescue too late.

“You can ask most veteran police officers or detectives how heartbreaking it is when they have to respond to a call that involves an injury or God forbid a fatality to a child,” Sini said at the news conference.

According to the Suffolk County Medical Examiner, from 2014 to 2016, 59 people in the county lost their lives as a result of drowning.

Atkinson said Fire Island beachgoers often pass by the ambulance company’s Lakeland Avenue location on their way to the ferry, making a stop for a life jacket that much more convenient.

“It only makes sense that they can stop at the ambulance company and sign out a life jacket, take the ferry over and enjoy the beach safely,” Atkinson said.