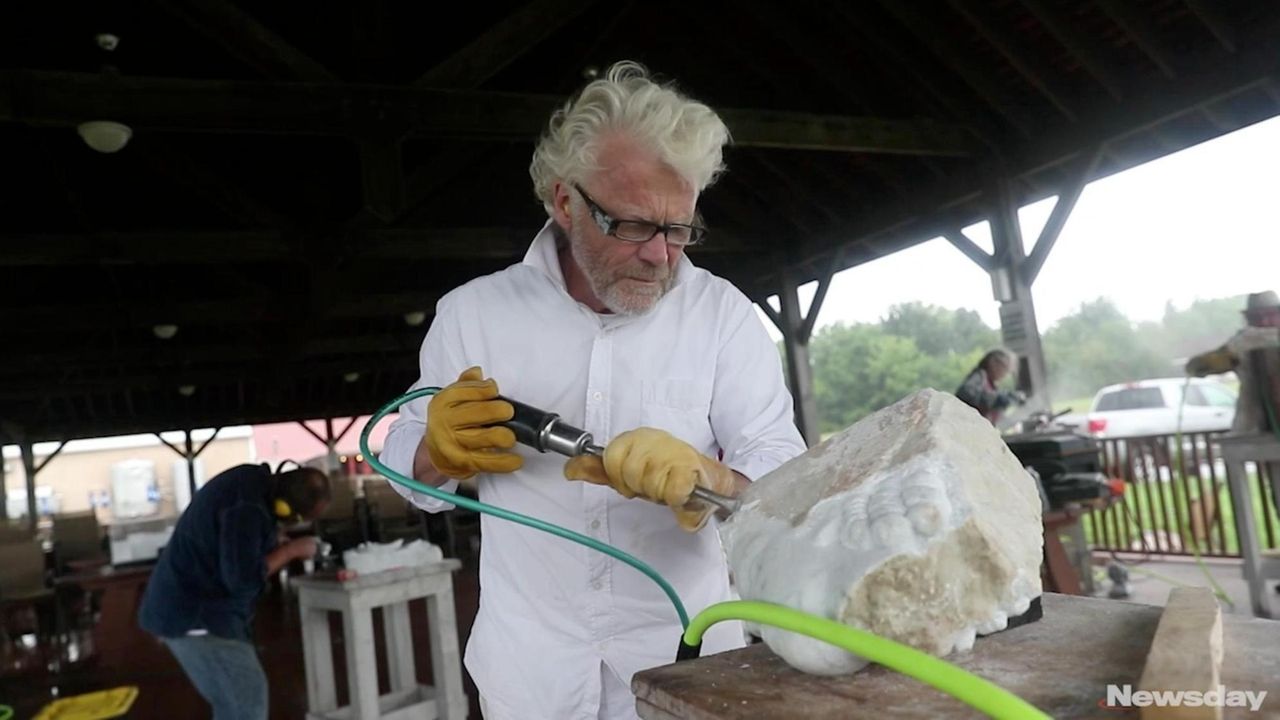 An image of the Virgin Mary has emerged at Pindar Vineyards in Peconic.

Not in the wine-stained ring left by a glass of merlot or in the wood grains of a wine barrel, but from a piece of Italian marble meticulously chiseled and ground by Riverhead-based sculptor Jill Burkee.

The inaugural East End International Sculpture Symposium is underway with six sculptors creating their art across four North Fork vineyards. A $15,000 grant from the Suffolk County Department of Economic Development and Planning awarded to the Long Island Wine Council has paid for airfare and expenses of the artists from the Czech Republic, Argentina, Scotland, Sweden, Italy and the United States.

Wine tasters are invited to watch as the stoneworkers use hand tools, pneumatic chisels and electric grinders to carve Carrara  marble — the same type used by Michelangelo — over three days spent at each vineyard.

When they're finished, 24 pieces of sculpture will be auctioned off at a to-be-determined time and place. The wine council, the East End-based Artida Cultural Center and the artists will share the profits from the sales.

“It all starts out as lumps of stone and then — to my amazement, anyway — it turns into something beautiful,” said Sal Diliberto, a wine council past president and current board member.

The funding came from the Suffolk County Hotel Motel Tax, which levies a three percent charge on nightly hotel fees, said Legis. Al Krupski (D-Cutchogue), who helped secure the money. The grant was earmarked for a cultural or historical activity, and winemaking and marble sculpture seemed a natural fit, Diliberto said.

“Winemaking started about 4,000 years ago,” said Diliberto, who will host the event at Diliberto Winery in Jamesport later this month. “It’s probably around the same time people started taking pieces of stone and chopping away at them.”

The sculptors are given three days at each vineyard to create their pieces, which are all in some way incorporating the work of Mexican artist Frida Kahlo. Pieces have ranged from a carved representation of Kahlo to a more abstract figure of a woman standing atop a mountain with the wind blowing in her hair. The event is not a competition, but a collaborative symposium, Burkee said.

“This is to give this part of the Island a flavor of what happens in Europe,” she said.

Burkee, sculptor Giancarlo Biagi and singer Germana Pucci are founders of the Artida group whose mission is to bring international art to the East End. The trio — who have lived as family for four decades and are raising two adopted daughters — plan to build a year-round artist space on a property Biagi owns on Riverhead’s East Main Street.

Their architect, Martin Sendlewski, said a final site plan should soon be ready to submit to Riverhead Town.

“It’s perfectly situated between the North and South Forks,” Sendlewski said of the center. “We feel this will become a beacon of the arts here on the East End.”

The East End International Sclupture Symposium continues this month at: