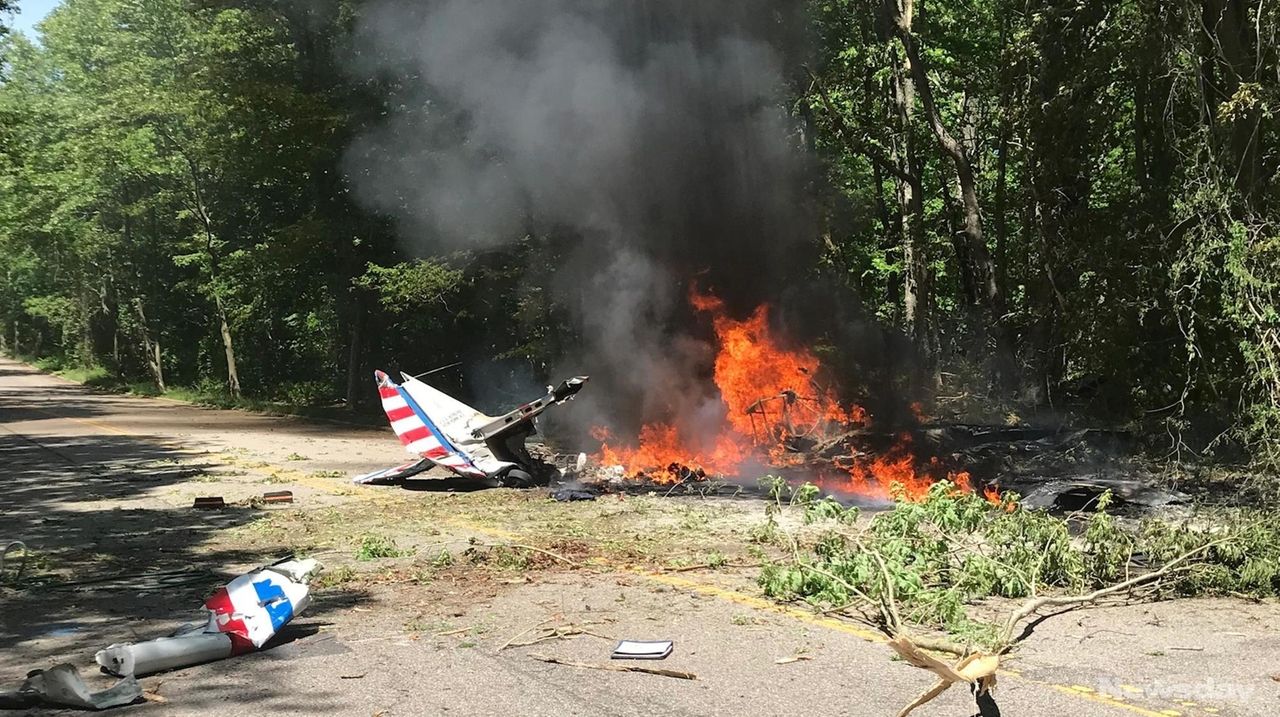 Officials responded to the scene of a crash in Melville on Wednesday. The plane, with one person aboard, crashed in a wooded area and burst into flames, police said. Credit: Newsday

The Federal Aviation Administration has interviewed the pilots who were flying in tandem when a team member died after his vintage plane crashed into a Melville neighborhood, an official said Thursday.

A spokesman for the National Transportation Safety Board said the agency, along with the FAA, is trying to determine what caused the World War II-era North American T-6 Texan to crash into a wooded area on Wednesday, killing its sole occupant, Ken Johansen, 52.

Johansen had flown days earlier in the Bethpage Air Show at Jones Beach as part of the famous GEICO Skytypers Air Show Team.

The FAA has shared information from the pilot interviews with the NTSB.

“We are doing the standard things: looking at the pilot’s record, maintenance records, the engine,” NTSB spokesman Terry Williams said Thursday morning. “We are still in the very, very early stages of this investigation.”

Johansen, an executive officer with the Skytypers, had taken off from Republic Airport in East Farmingdale headed to Maryland with five other planes from the team on Wednesday, a spokeswoman for the flying group said. No one on the ground was injured in the crash, police said.

Records show the plane was a vintage fixed-wing, single-engine craft, manufactured in 1942. It was commonly used by pilots in the Navy and Army Air Forces as a training aircraft.

On Thursday morning, the Skytypers website was replaced with a statement about the crash and an image of Johansen, a professional commercial airline pilot and former Navy aviator from Doylestown, Pennsylvania.

“Fortunately, there were no injuries on the ground, however, we lost a dear friend,” the statement read. “Ken was loved and admired by many in the aviation community, his family and friends, as well as those in his hometown of Doylestown, PA. Our hearts are broken as we mourn his passing.”

“The outpouring of kind thoughts and wishes at this sad time are greatly appreciated,” the statement ended.

Johansen was married with two children, and his father was a Skytypers instructor, Bob Johansen. The younger Johansen first flew with the team when he was 8 years old, according to the group.

The Skytypers website had said Wednesday that Ken Johansen is a captain for a major airline.

“We are deeply saddened to learn of the passing of First Officer Ken Johansen,” King said in a statement. “The thoughts of the entire United family are with his loved ones.”

Pilot killed in vintage plane crash, officials sayA small plane, with reportedly one person on board, crashed in a wooded area off Northcote Drive in Melville, police said. A witness said she saw a small vintage plane spinning in the air and heading down and then heard a loud sound.