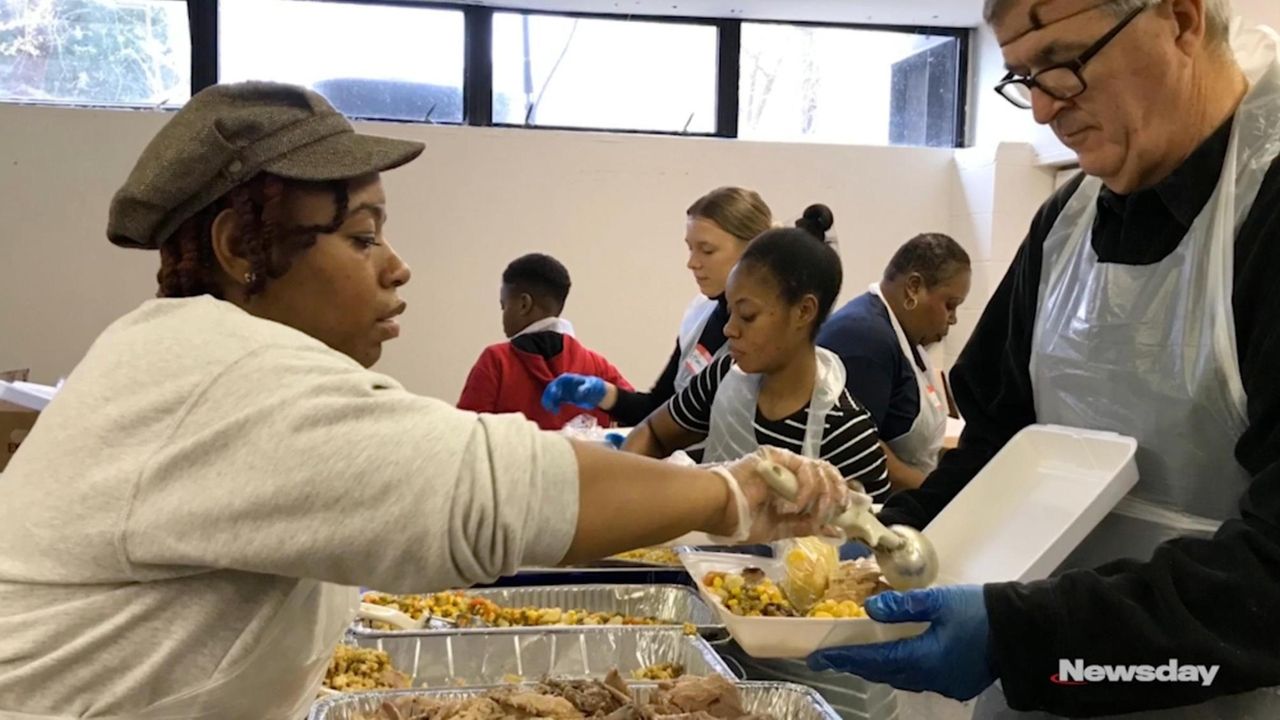 Volunteers at the Bethesda Seventh Day Adventist Church in Amityville assembled Thanksgiving dinner to be delivered to 2,000 people Thursday. The Rev. Roy Kirton, former pastor of the now-defunct Circle of Love Ministry in Amityville, spoke about what it means to give back to the community.        Credit: Newsday / Dandan Zou

About a dozen volunteers scooped turkey, vegetables and stuffing into white Styrofoam boxes in a busy assembly line Thursday at the Bethesda Seventh Day Adventist Church in Amityville under the watchful eye of the Rev. Roy Kirton who  yelled “keep it moving.”

In the next room, more volunteers prepared bread rolls and desserts to be delivered to shelters, motels and homes of those in need.

The operation, which Kirton started 25 years ago, grew from sending 35 meals to a Farmingdale motel on Thanksgiving, to sending more than 2,000 packages of donated food to communities across Long Island and Brooklyn.

“The focus was to reach the disenfranchised,” including the ones who can’t pay their bills and those who recently came out of prison or lived in sober homes, he said. “So we thought here is one way to show them love.”

Kirton, 68, said he wanted to help those struggling to  put food on the table on a holiday that may not be joyous for all.

“I grew up on welfare. I know what it is to be [hungry on] Thanksgiving and not have food,” said Kirton, former pastor of the now-defunct Circle of Love Ministry in Amityville. “So, I promised myself I didn’t want people to live the way I lived.”

Volunteer Theron Green, 35, of Bay Shore, said he grew up poor as a child in Jamaica. When he was hungry, he said he and his siblings would play games to distract themselves.

Green, who has a cousin who had a stroke and could barely speak, said he decided to volunteer to show his gratitude.

“Some people can’t get out of bed today because they are sick,” he said. “I want to give back. It makes me feel happy.”

For sisters Bailey and Liz Riekkinen, of Smithtown, volunteering on Thanksgiving morning has been a family tradition for years.

“It’s something that makes Thanksgiving more special. It’s giving thanks for what you have … and sharing,” said Bailey Riekkinen, 21, who began volunteering since she was 8. “It definitely is rewarding. It’s good for the soul.”

As the sisters sliced pumpkin pies, volunteer drivers lined up outside the makeshift meal-preparing room to deliver the packages.

Among the drivers   were Marie Mannion, 54, her son Thomas Mannion, 25, and Thomas’ girlfriend Julia Woelk, 22, of West Babylon. Mannion had searched online for volunteering opportunities as her way of “paying it forward.”

“We’ve been in a tough situation before. People helped me out,” she said. “Now it’s our turn to give back.”