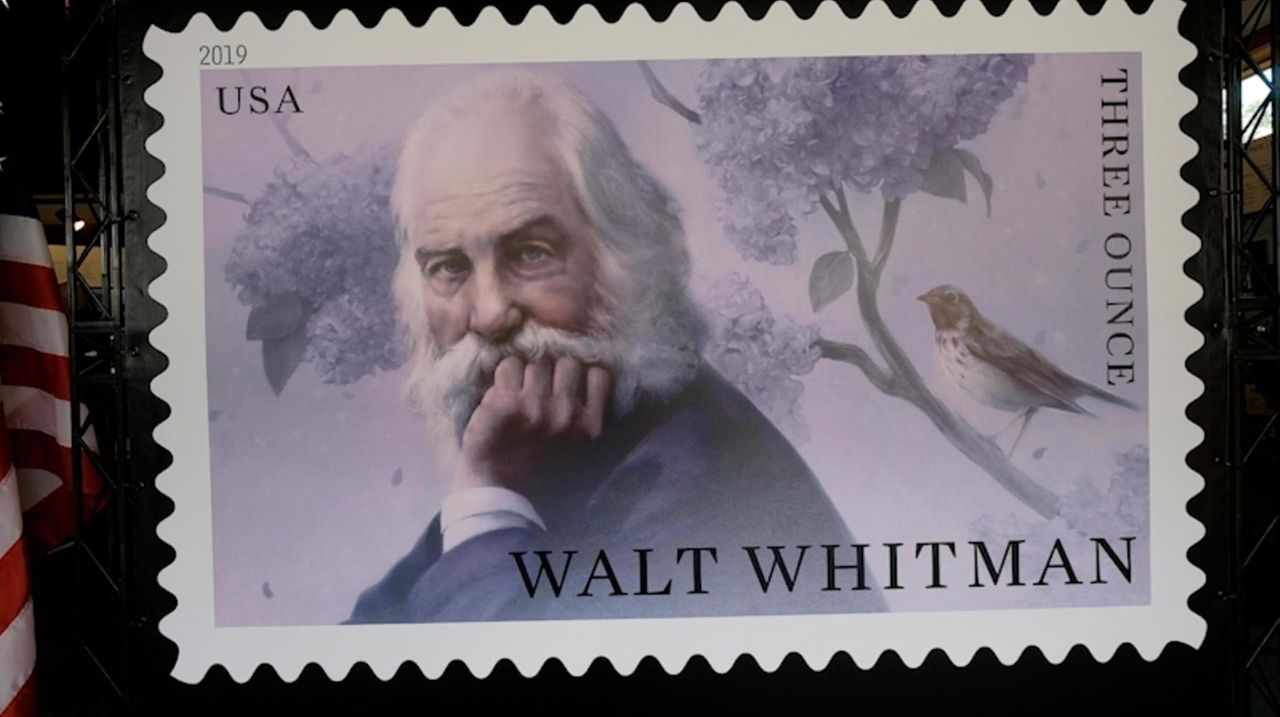 The U.S. Postal Service on Thursday unveiled a stamp of the poet Walt Whitman at his Huntington Station birthplace on the bicentennial of his birth. The bird and the lilac hue on the stamp are references to an elegy he wrote weeks after President Abraham Lincoln's assassination. Credit: Jeff Bachner

Walt Whitman gazes out from a new U.S. Postal Service stamp unveiled Thursday at his Huntington Station birthplace. The gray-haired poet is seated, partly covering his mouth with his hand. Behind him in the lilac-tinted portrait, a hermit thrush perches on a branch.

The bird and the lilac hue salute an elegy Whitman wrote weeks after President Abraham Lincoln's April 1865 assassination: “When Lilacs Last in the Dooryard Bloom’d.”

The artist who painted the portrait, Sam Weber of Brooklyn, based it on an 1869 photograph taken by Frank Pearsall. “I think this is a wonderful image of the man, looking pensive and masculine and powerful at the same time,” said Pearsall, adding,  “There is a vulnerability in his face I was really drawn to.”

Whitman and Lincoln — who had read “Leaves of Grass” — had at least a nodding acquaintance, experts say, perhaps due to Whitman’s work for the Department of Interior and the attorney general.

Fearing one of his younger brothers, a Union soldier, had been grievously wounded in the Battle of Fredericksburg, Whitman traveled there from Brooklyn in 1862. Relieved to find his brother had been only “slightly scratched,” he devoted the next three years to caring for hospitalized soldiers and comforting the dying.

Professor David S. Reynolds, of The Graduate Center of the City University of New York, said at the unveiling that despite the divisiveness of the Civil War and all the suffering Whitman observed, the poet remained optimistic. Even after enduring strokes, Whitman asked: “Is there anything better in this world anywhere than cheer — just cheer?"

Many aspects of Whitman's poems and life still enthrall readers: his eloquence despite his leaving school at 11 to support his family; his celebration of immigrants, new ideas and the spoken word; his physicality and exploration of sexuality — he was gay and defied society in writing about it — and his love for Long Island, which he revisited after a stroke.

“I remember well, I felt that I must one day write a book expressing this liquid, mystic theme,” he wrote. “Afterward, I recollect, how it came to me that instead of any special lyrical or epical or literary attempt, the sea-shore should be an invisible influence, a pervading gauge and tally for me, in my composition.”