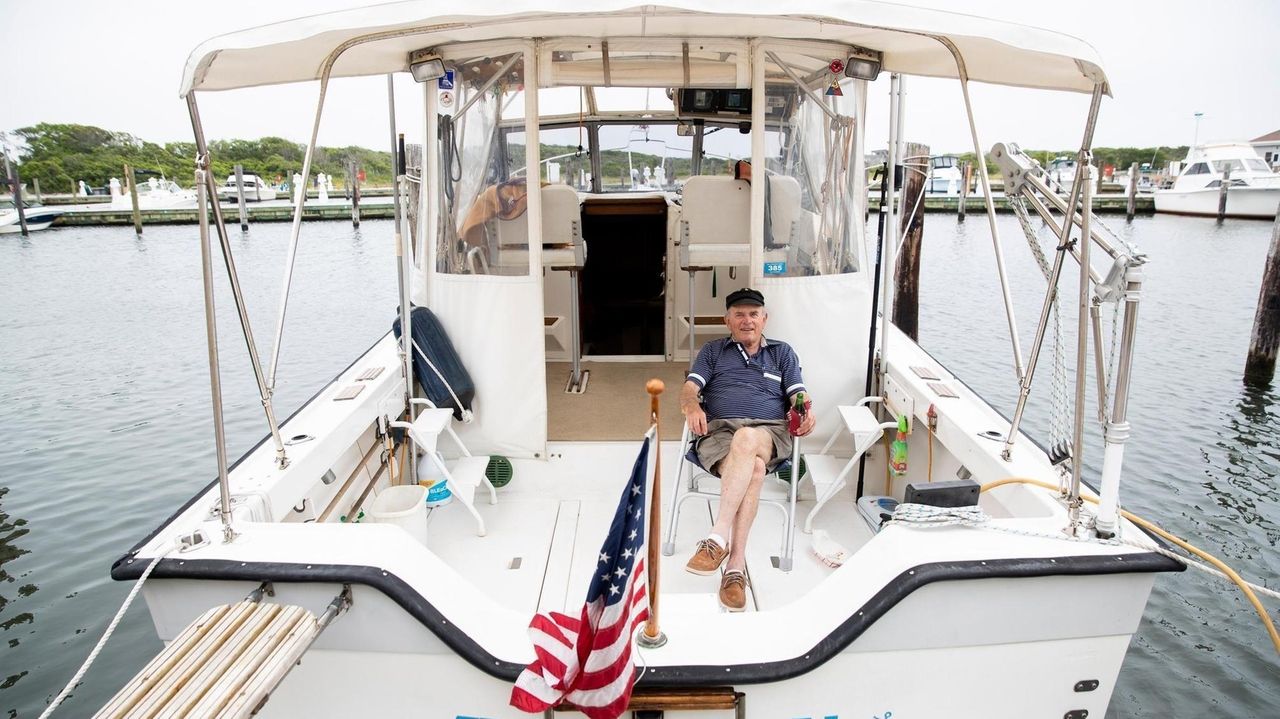 The Watch Hill marina on Fire Island closed in September 2016 for repairs due to superstorm Sandy and reopened May 18. On Sunday, boaters were happy to return to enjoy the first weekend of the summer.  Credit: Michael Owens

You can all but hear the heartbeat returning to Watch Hill marina on Fire Island, which has reopened for the summer after nearly two years of repairs due to superstorm Sandy.

Sunday morning, pleasure boats slipped across the water with hardly a sound. Kids with crayon-colored shovels dug for treasure in the sand, and nature-loving backpackers pitched camp beside the tall marshes.

Though much has been rebuilt here, Watch Hill continues to offer people what it always has.

“No horns, no trains and no traffic,” said Bob Burston, 48, of Patchogue, relaxing on his boat, named Serenity Now.

This was his family’s first visit here in two years, and he was enjoying the “quiet, secluded” atmosphere of a place you can’t get to by car. You have to take a boat or the ferry.

“This is our vacation, one day a week,” Burston said.

Watch Hill closed in September 2016 and reopened May 18. Already, the old ways of the marina were coming back, including that sense of community among boaters.

John Allison, 68, closing up his boat after a leisurely weekend, gave a goodbye hug to his buddy, Bill Peysson of Lindenhurst, docked a few slips away.

Their families are planning to take their boats to Newport, Rhode Island, this summer.

Allison then pointed across the way to another big boat.

“We’re planning a trip to Italy,” he said, though not by boat.

No one understands the challenges of resurrecting the marina better than Doug Biviano, the Brooklyn man who received the contract to run the place shortly before it reopened. He said he’s getting little sleep these days.

“People move on and find other ways to spend their time,” said Biviano, president of Love Watch Hill and Sailors Haven Inc. “We hope they give it another look.”

Biviano runs the revamped marina, restaurant and bar, general store and campground at Watch Hill. He also runs the marina and snack bar at nearby Sailors Haven, which reopened in 2015 after months of Sandy-related repairs.

Sunday featured overcast skies, and the great majority of the 168 slips were vacant. Just a few kids scampered across the sand.

Robert Groos, 84, of Moriches, said he didn’t want to go over to Davis Park, which he said was “all rock and roll.”

He sat in a folding chair on the deck of his long 30-foot boat, sipping a beer as he planned to read a book and watch tapes of the old TV comedy “Barney Miller.”

“Here it’s always quiet, no matter which way the wind blows,” he said.

When people do give Watch Hill another look, they will see what some $7 million in repairs can do. When Sandy hit in 2012, it struck hard at Fire Island National Seashore. Two dormant winters also took a toll. Workers found evidence of raccoons in ceilings and water damage from burst pipes.

Today, all the bulkheads have been replaced along with the electrical and lighting systems. Days ago, a barge came in and replaced numerous damaged and missing pilings, Biviano said.

Biviano is promising even more: live music, the addition of a restaurant menu, more nature programs, and games and attractions for kids.

For the Ahl family of Amityville, the reopening offered the opportunity to pass on some family traditions. Christopher Ahl, taking the windy ride on the ferry from Patchogue, described how his parents brought him to the marina as a child.

Ahl, 33, was heading there Sunday to join his parents. This time, though, he was bringing along his wife, Christine, and their 1-year-old son, Brennan — both visiting for the first time.