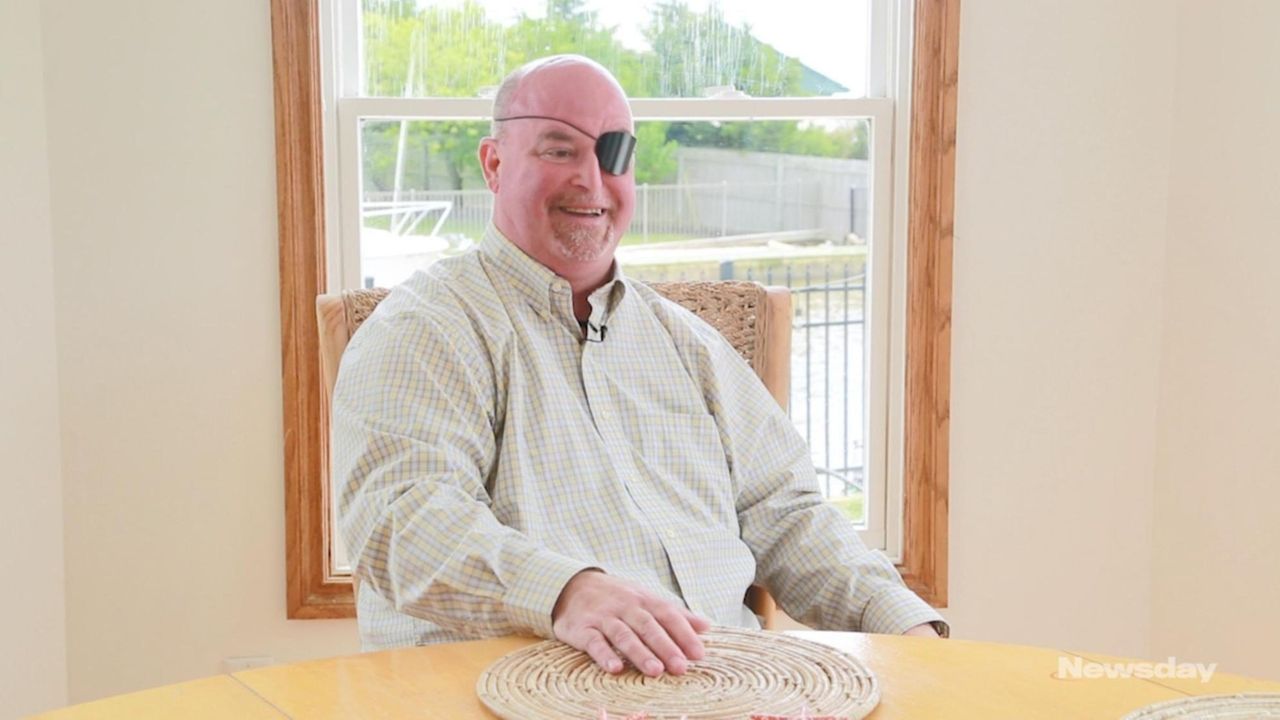 On May 23, William Sullivan discussed his struggle for survival after being flung into the Great South Bay's waters on a beautiful evening earlier in the week, recounting the events which led him to question if he was going live through the night and what he thought that kept him swimming forward.    Credit: Newsday / Shelby Knowles; Stringer News Service

A Bayport man who was flung off his watercraft into the Great South Bay swam for two hours at night to reach land, desperately blowing his whistle to alert first-responder boats in the distance and fueling the search with a one-second cellphone call, Suffolk police said Wednesday.

William Sullivan, 52, left Homans Creek in Bayport for a spin aboard his Yamaha watercraft about 6:30 p.m. Tuesday. But a rogue wave knocked him off, near Barrett Beach on Fire Island, police said.

It was more than luck that Sullivan survived as darkness fell over the cold waters in what turned out to be an almost 3-hour ordeal, with about 30 first responders and at least five agencies searching for him, said Lt. Rocco Baudo, who helped command the search as part of the marine bureau.

"He did a lot of things right," Baudo said.

After Sullivan was thrown into the water, the wind and currents pulled him away from his craft so fast that he knew he couldn't swim back to it, the lieutenant said.

But still, he was fortunate, Baudo said: "The tide was coming in so it wasn't pulling him out [to] the ocean. It was keeping him in the bay and the way the wind was blowing, it was pushing him toward Fire Island."

The water was about a chilly 65 degrees, police said, but Sullivan had a partial wetsuit, one that ended at his elbows and knees. He wore a lifejacket. He didn't panic and when he saw lights on Fire Island, he swam toward them.

And key to his rescue, Sullivan had a "float plan," in which he told his wife where he was going and what time he'd be back, Baudo said.

"All that stuff bought him a lot of time," the marine lieutenant said.

When Sullivan didn't show up, authorities said, his wife called police at 7:55 p.m. It set off a large search — police boats, vessels from three fire departments, the Coast Guard, police helicopter and officers walking along the Fire Island shores.

"He saw the police boats out there," Baudo said. "He saw the helicopter flying above. He saw us looking for him, but we couldn't find him. It got dark pretty quick out there on the water.

"He was blowing his whistle, but with that wind blowing and that helicopter above, no one was going to hear it."

Searchers found Sullivan's Yamaha off Barrett Beach at 8:11 p.m. but no sign of him.

Police tried several times to call Sullivan on his cellphone, which he had kept in a waterproof case. But the phone kept cutting out  because of bad reception in the bay.

Heading toward two hours into the search, no one knew if the Bayport man was alive.

Then, finally, the cellphone reception held for a one-second call.

"It was very difficult to hear him but it was basically 'Help, I'm in the water.' " Baudo said.

The lieutenant recalled that he broke into a smile. That extremely short call gave searchers crucial information and new energy.

Not long after that, Sullivan struggled onto Fire Island Pines, almost two miles from Barrett Beach, and up a boardwalk on Porgy Walk.

From there, he called 911, and when officers arrived quickly, he was sitting on a boardwalk bench.

"He was exhausted and frozen," Baudo said. "First, he apologized for getting everybody out looking for him. Then he said 'God bless you all.' "

Sullivan could not be reached Wednesday.