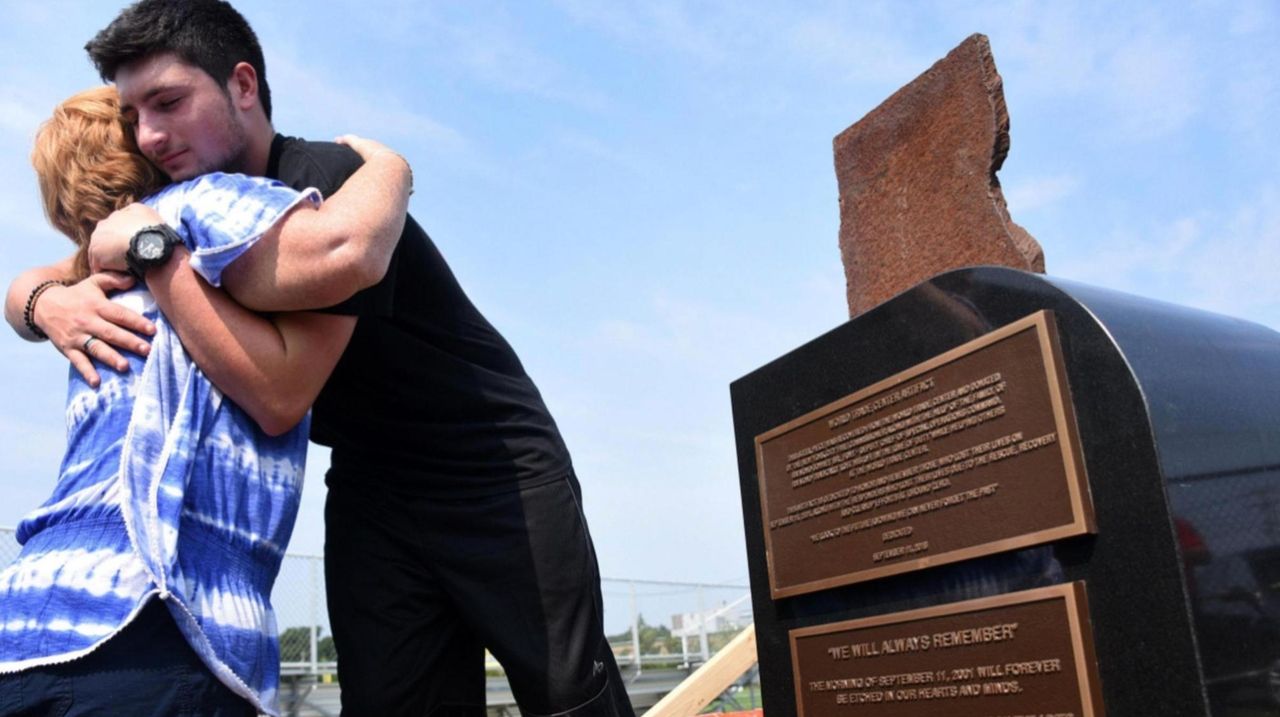 "It was close to Sept. 11 and it made me think that West Babylon doesn't have its own 9/11 memorial," he said.

So with the backing of his school administrators and Boy Scout Council, he got board of education approval to build one at the high school. Then began the work of securing sponsors and funds. On Saturday, after a year of planning, petitioning and planting, Reiff will dedicate the memorial to the five West Babylon residents who lost their lives on or as a result of 9/11.

“I would do this 10 times over if I can, because it’s just an amazing feeling to help the community,” said Reiff, now 17 and a senior.

Reiff walked the grounds with assistant principals Michael Devane and Stephen O'Leary to find a site for the memorial, placed near the turf sports field.

“I think it speaks volumes about Liam — someone who’s very young,” Devane said. “That still our younger generation now recognizes the tragedy of that day and the significance that it had on all of us." The memorial includes a roughly 100-pound piece of steel recovered from Ground Zero. Reiff wrote essays to FDNY Commissioner Daniel Nigro, who donated the steel with help from the family of Deputy Chief Raymond Downey Sr., a Deer Park resident who commanded the FDNY's rescue units and died in the collapse of the World Trade Center.

Thousands of dollars worth of donations helped bring the project to life. It features two 6-by-6 granite beams donated by Paul Zimmerman, 61, of Lindenhurst, a leader of Troop 104. Lindenhurst businesses also helped, with Wellwood Memorials providing monuments and ordering the plaques, Nicolock Paving Stones supplying bricks and Century Building Supplies contributing soil. Donations from family, friends and the community were also vital.

The National September 11 Memorial and Museum provided a seedling from the "Survivor Tree" — a Callery pear tree at the World Trade Center that endured the attack — to stand as a living reminder of resilience, survival and rebirth, Reiff said.

“Having been principal here when it did occur, we went through every possible emotion,” said principal Ellice Vassallo, who suggested the location of the memorial. “And while we have a beautiful courtyard and there are small remembrances to people who lost their lives, this one brings it all together.”

Reiff’s mother, Shelia, father, William, and Boy Scout brother, Colin, 15, sat with him outside businesses for hours every week since May to raise more than $4,000 for the project.

“Liam is the type of person that always thinks of others,” Shelia Reiff said. “And you could see that with this project.”

Through their fundraisers, the family met surviving first responders, including some who told them they now have cancer as a result of their relief work.

Lisa Reahl of Babylon has never met Reiff, but he contacted her to ask if he could include her sister, Tara Moore Debek, in the memorial. Debek died on 9/11 while working for Marsh & McLennan on the 98th floor of the north tower. She was 35. Her daughter, Paige Debek, was 6 months old. Paige now lives with Reahl and is a junior at West Babylon High School.

“It is amazing that this young man was only an infant when the 9/11 attacks occurred, and 17 years later still wants to make sure that those victims from our town are never forgotten,” said Reahl, 51, who will attend the dedication and thank Reiff.

Reiff will submit a service project workbook to the Boy Scout council this fall to officially become an Eagle Scout.

Troop 104 leaders John Russo and Michael Kaiser, both retired emergency personnel who went to the World Trade Center after it was hit, have known Reiff since he was a young scout. This memorial is the 25th Eagle Scout project Russo has worked on — and easily the most complex, said the retired 35-year NYPD detective.

“I’m glad to see that people aren’t forgetting, because a good portion of the kids that are in the troop weren’t even alive when it happened, and they really can’t grasp what happened and what everybody went through — personally and this country,” said Russo, 56, of Babylon. “Monuments like this will keep it fresh in people’s minds and hopefully, nobody will ever forget.”

Reiff wrote the text on each of the monuments at the memorial with that sentiment in mind. The largest plaque, inscribed with the names of the 9/11 victims from West Babylon, reads: “No day shall erase you from the memory of time.”

“The 9/11 memorial will not only be for the people of today entering the sports field but also for future generations to come to know what happened,” Reiff said.

Kaiser, 56, of West Babylon, an ex-FDNY emergency medical technician, said he believes the monument will represent remembrance and resolve.

“We should never forget what happened, but we have to move forward,” Kaiser said.

The memorial is in honor of two FDNY firefighters:

And three workers in the World Trade Center: