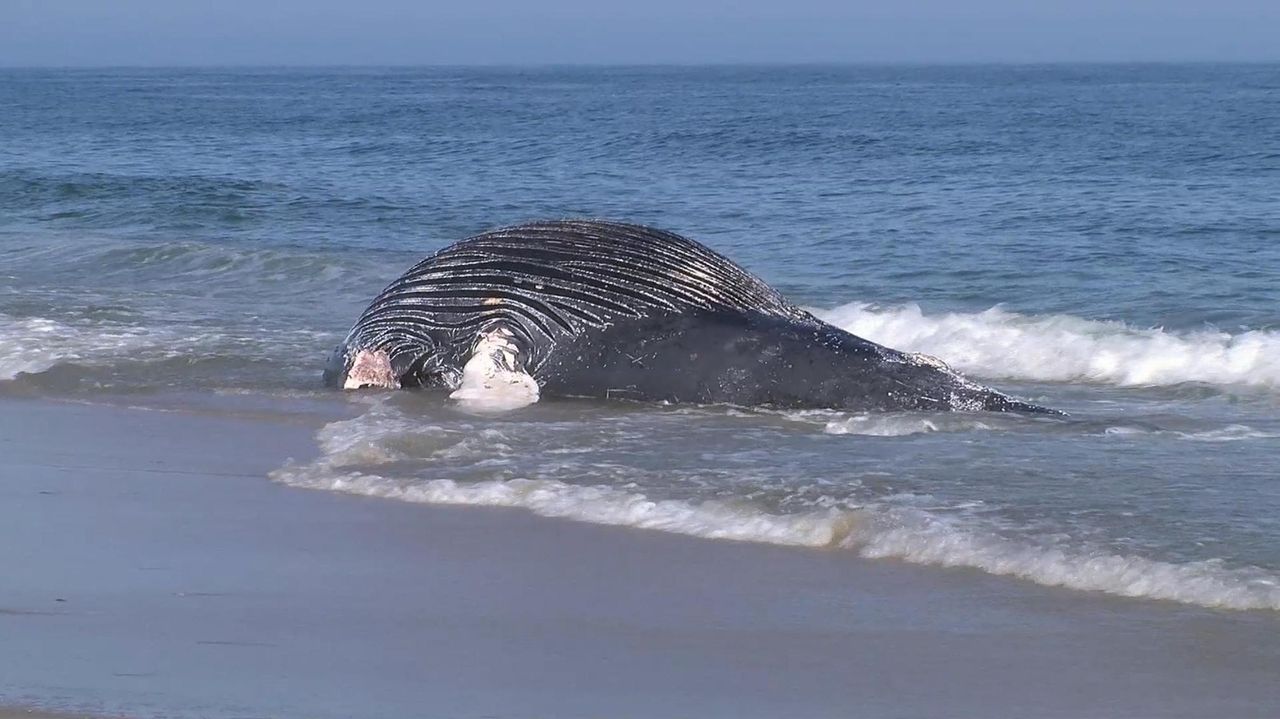 Marine biologists responded to a 27-and-a-half-foot long female humpback whale carcass that had washed up along Smith Point County Park in Shirley — the seventh stranding of a large whale off Long Island this year, officials said Sunday. Credit: Stringer News

A humpback whale carcass washed up along Smith Point County Park in Shirley Saturday afternoon — the seventh stranding of a large whale off Long Island this year, officials said Sunday.

Marine biologists with Atlantic Marine Conservation Society responded to the 27½-foot-long female floating in about a foot of water about 7 p.m. Saturday, said Rob DiGiovanni, the Hampton Bays-based nonprofit organization’s chief scientist. The carcass washed ashore east of the beach pavilion and was examined. Necropsy results are pending, he said.

Before 2007, a whale stranding was reported on average every other year. That number has steadily increased with 52 reports between 2017 and the current date, DiGiovanni said.

“The last couple of years have been very busy,” he said. “We’re averaging one whale a month, which is a lot higher than we’ve seen.”

The organization has responded to five humpback whale strandings and two minke whales in 2020, he said.

The Atlantic Coast has experienced an “unusual mortality event,” meaning an elevated number of deaths, of humpback whales since 2016, according to the National Oceanic and Atmospheric Administration. A portion of the animals showed evidence of being hit by vessels, but more research is needed, according to NOAA.

Earlier Saturday the conservation society responded to a dead leatherback sea turtle in Quogue estimated to be between 600 and 800 pounds. That animal had plastic in its stomach, DiGiovanni said. A 25-foot dead male humpback whale was also spotted floating off Montauk on Friday. The organization took samples of the decomposing animal and attached a buoy to track its movement.

Staffers with Suffolk County Department of Public Works, the county Parks Department and the state Department of Environmental Conservation were also on the scene at Smith Point, DiGiovanni said. The animal has since been buried.

The conservation society is urging the public to be aware of wild animals and to call their stranding hotline at 631-369-9829 if an animal appears stranded or is dead.