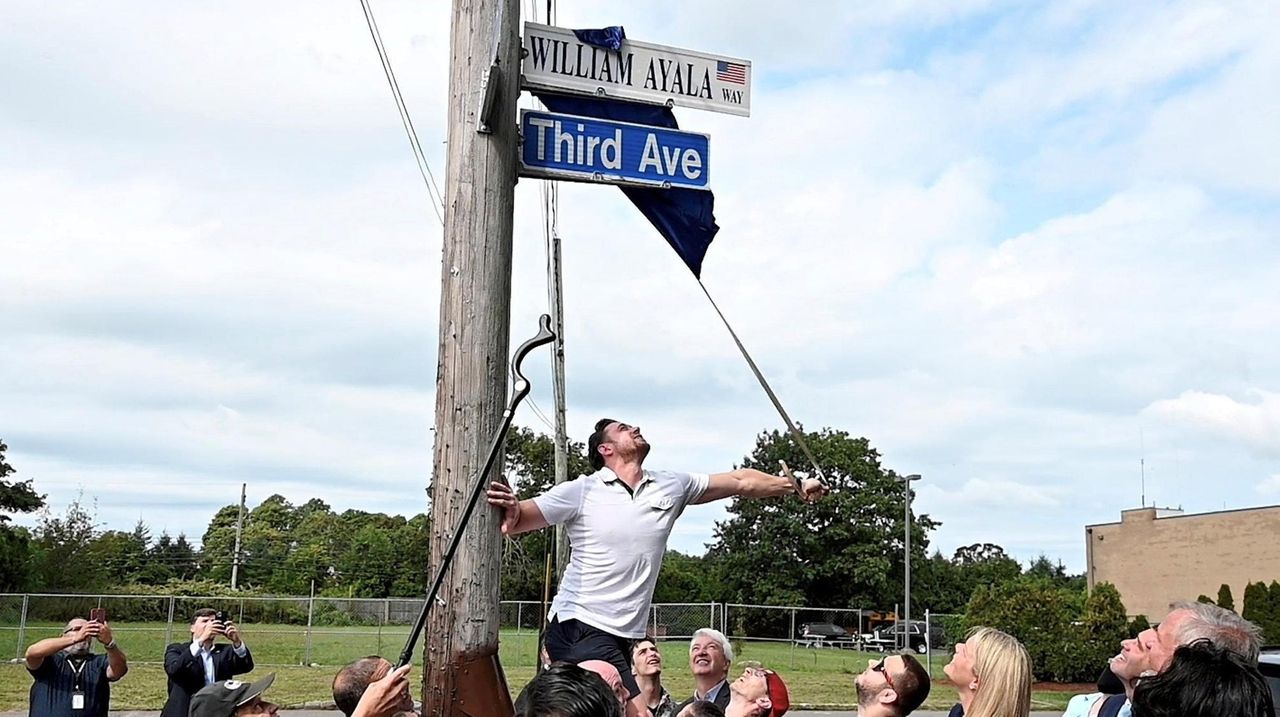 Family and friends gathered in Brentwood for the renaming of a street in honor of William Ayala, a beloved volunteer, who passed away from COVID-19 last year.  Credit: Newsday / Steve Pfost

Islip Town renamed a street Thursday after an Air Force veteran who delivered meals in the community until he became ill and died in 2020 due to complications from COVID-19.

William Ayala, known as Bill, delivered meals to seniors in the community for 25 years, while volunteering for the nonprofit Adelante of Suffolk County, before his death at age 72.

Family members, local and state officials gathered outside Adelante of Suffolk County in Brentwood, on Stein Drive near Third Avenue, which was renamed William Ayala Way.

"The unveiling of William Ayala Way is special because it was indeed his way of being that positively impacted everyone he encountered," Ayala’s niece Sylvia Diaz said. "His way was to love unconditionally."

Ayala, who died on June 13, 2020, held the title of director of senior programs for Adelante of Suffolk County. Previously, Ayala, of Medford, worked for the New York City Transit Authority until he retired.

An obituary last year about Ayala described how he took care of those he called "his seniors" up until the day he fell ill. Ayala’s wife of nearly 51 years, Zaida, also died from complications from COVID-19, four days after he did. His wife's sister, Carmen Milagros Ruiz, who was visiting from Odessa, Florida, and was staying with the Ayalas, died a month before the couple.

The Ayalas were parents of six adopted children.

Emma Homan, Ayala’s daughter, called her dad a "great man" and said he didn’t consider his time at Adelante to be work.

"This was family," said Homan, alongside her uncle David Ayala, about her dad's commitment to delivering meals to people in the community. "He loved them as family."

"It’s not just dropping off a meal, it’s a lifeline to so many of our seniors and William really did it with all of his heart," Carpenter said.

College enrollment down 6.6% over two years
Police: DNA analysis to be performed on Brian Laundrie's remains
All 18 seats in Suffolk Legislature up for election
Manhasset district says hackers stole sensitive information
Phone scam: Pay now or lose your lights and gas
Oyster Bay votes 7-0 to seize private golf club by eminent domain
Didn’t find what you were looking for?