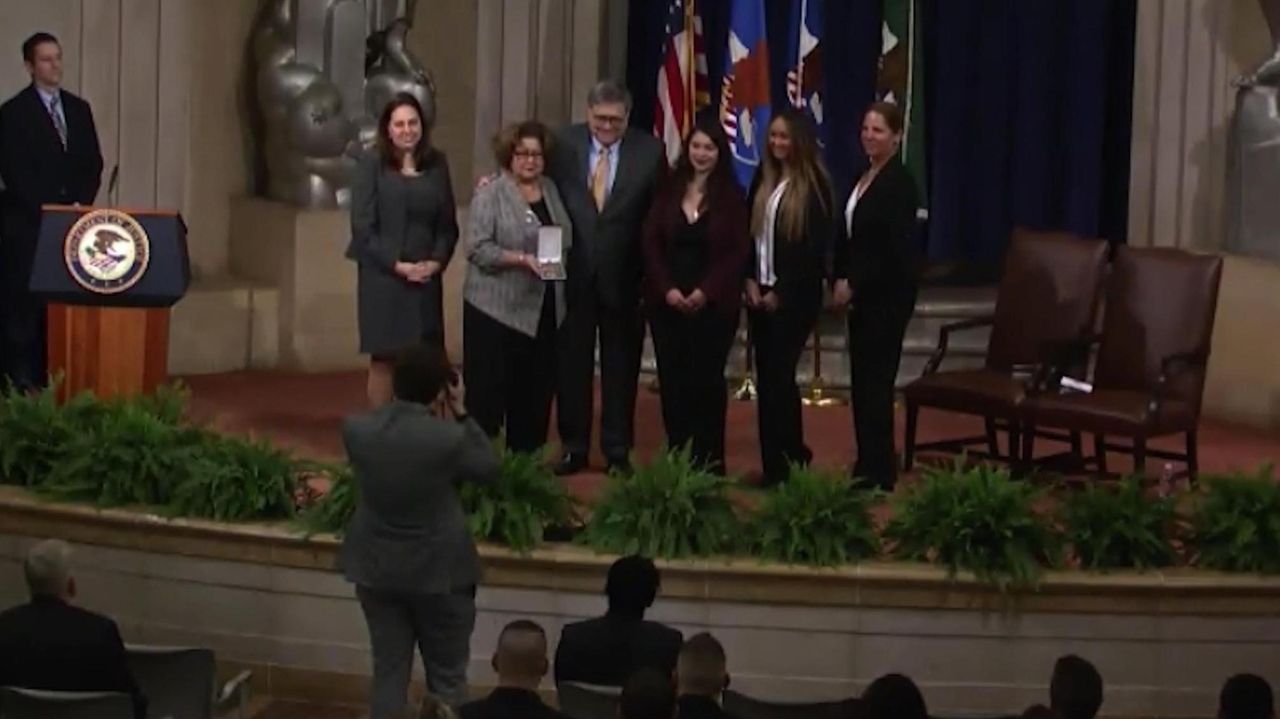 A Suffolk police detective cited as a crucial cog in law enforcement's fight against MS-13 was awarded posthumously Tuesday by U.S. Attorney General William Barr for helping "deal a crippling blow" to the street gang in the county.

Det. William Maldonado, a 31-year-veteran of the Suffolk police department who died of colon cancer in 2018 at age 53, received the Attorney General's Award from Barr during a ceremony in Washington, D.C.

“By successfully managing intelligence from numerous sources and coordinating local police precincts, Detective Maldonado was able to help his team end the killings, bring the perpetrators to justice and deal a crippling blow to MS-13’s influence in Suffolk County,” Barr said. “As if those actions were not heroic enough, Detective Maldonado remained laser-focused and dedicated to his duty despite his battle with cancer.”

This is the third year the Attorney General's Award has been given to police officers nationwide. The award recognizes law enforcement officers for their criminal investigations, field operations, or innovations in community policing.

Maldonado is the first officer to receive the award posthumously. In all, 19 officers, selected out of more than 400 nominations from police agencies in 39 states, were honored by Barr at the Department of Justice headquarters.

A longtime member of a federal task force investigating MS-13 in Suffolk County, Maldonado is widely acknowledged as a catalyst in the effort to bring a wave of 2016 killings allegedly connected to the gang’s Sailor Clique to an end.

MS-13's violent reign on Long Island drew the attention of President Donald Trump early in his term. In July 2017, Trump visited Brentwood and described the communities affected by the murders as “blood-stained killing fields” that are “under siege.”

Despite Maldonado’s success, then-Suffolk Police Chief James Burke pulled him and other department detectives from the federal detail in 2012. Months after Burke resigned in 2015 under the cloud of a federal corruption probe, Maldonado was reappointed to the task force at the request of federal agents just before the wave of MS-13 violence.

In February 2016, Burke pleaded guilty to federal charges in connection with the beating of a man in a Suffolk police precinct after he stole items from the chief's department vehicle. That November, a federal judge sentenced Burke to 46 months in prison. The ex-chief served most of his sentence before his release last year to home confinement.

The loss of Maldonado struck a blow in the fight against MS-13 in Suffolk because federal agents shifted their investigations away from the county, said Robert Trotta, one of the detectives removed from the detail with Maldonado and now a Suffolk County legislator.

Had Maldonado remained on the task force in 2012, “it would be nothing like it was,” Trotta said referring to the gang's killing spree. “[Maldonado] had a great network of informants and when he left a vacuum happened.”

Maldonado became a Suffolk police officer in September 1987 and worked in the 5th Precinct before being promoted to detective in 1994, according to the police department. He spent a majority of his career in the major case unit investigating bank robberies before being assigned to the FBI Long Island Gang Task Force.

During his time on the task force, he was involved in the prosecution of more than 40 MS-13 gang members, which cleared more than a dozen homicides and 25 robberies, Suffolk police said.

“This recognition encapsulates everything Detective Maldonado was as a person and as a detective,” said Suffolk County Police Commissioner Geraldine Hart in a prepared statement.

Hart, a former FBI agent who headed of the Long Island Gang Task Force in 2014 before becoming police commissioner, described Maldonado as "proud to be a cop and we were proud to have him as a member of our SCPD family. His absence is felt every day.”