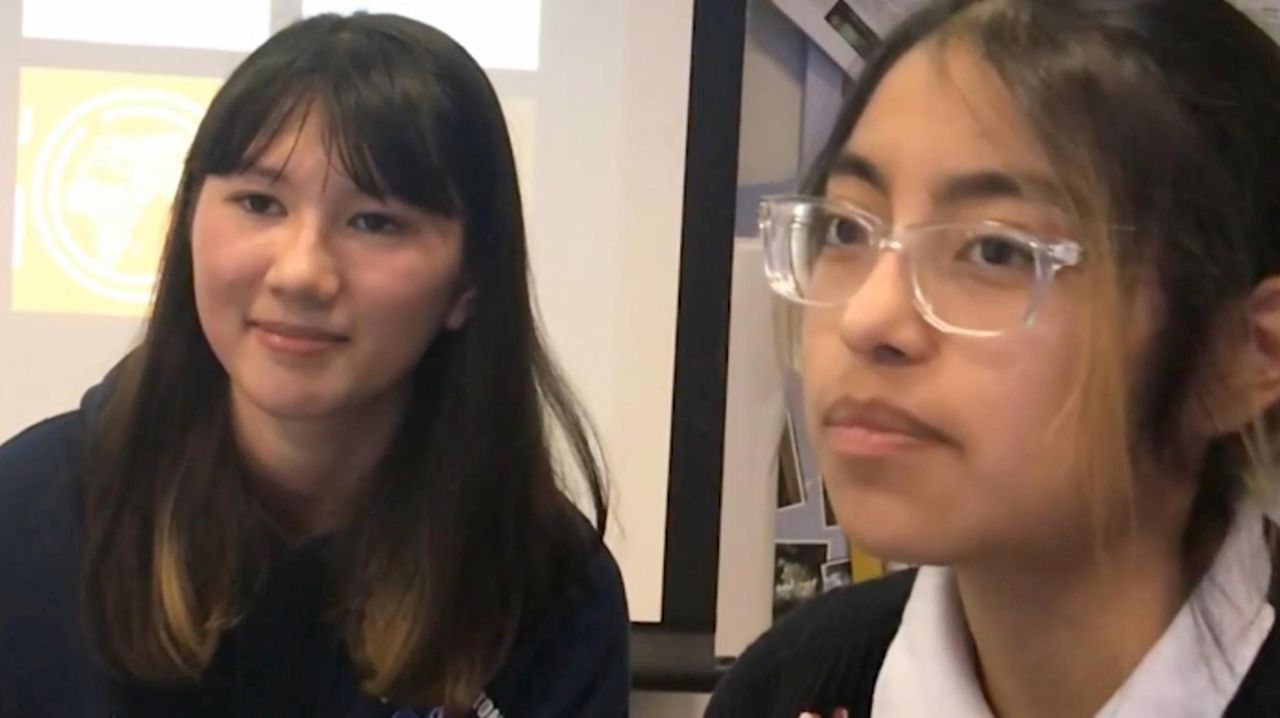 Hoping to teach the younger generation the values of renewable energy, Westhampton Beach High School students spoke on Wednesday about their plan to raise money to install wind turbines at a nearby elementary school. Credit: Newsday / Jean-Paul Salamanca

Westhampton Beach High School students are taking on the role of teachers, hoping to educate local elementary school pupils about the benefits of renewable energy with a trio of wind turbines.

The group in years past raised money to install solar panels at the high school and middle school, so the elementary school was the next step in efforts to promote renewable energy within the school district.

High school seniors and C.U.R.E. members Mai Nguyen-Jeanneret and Jane Alavez said last week that they were pushing to fund all three turbines before they graduate in June. Nguyen-Jeanneret, 17, of Westhampton Beach, said it's important to get people in an environmentally conscious mindset as early as possible.

“In high school, you already have developed ideas and it’s harder to get an idea to people who actually care,” said Nguyen-Jeanneret. “So if you start young, it will carry over into the future.”

Since the eco-friendly youth group began fundraising this past summer,  members have focused their efforts on the local level, approaching and sending letters to local businesses and organizations, residents and school alumni asking them to contribute money to the project. Nguyen-Jeanneret and Alavez also asked the Westhampton Beach Board of Trustees during its Oct. 4 regular meeting for help and advice on how to spread word of the fundraiser. The board later posted an informational fundraiser flier on the official village website.

“This group is one of the most motivated groups I’ve ever seen,” said Village Trustee Brian Tymann, a founding member of the C.U.R.E. club and a 1994 graduate of the high school. Tymann, 43, has been advising the group on fundraising strategies.

The group has avoided more popular platforms for fundraising such as GoFundMe, Nguyen-Jeanneret and Alavez said, because the vision is for the Westhampton Beach community to come together to make the wind turbine project a reality.

“We really want to make this community-based,” said Nguyen-Jeanneret. “We really think that the community aspect of it will make the project more significant.”

Jok Kommer, a science teacher at Westhampton Beach High School and the club’s staff adviser, said the most important lesson he wants students to take away from the project is how to work toward big goals.

“They’ve been very successful so far,” said Kommer, 60, of Riverhead. “Their goal is large, but they can do this.”

Despite the self-imposed fundraising deadline, Nguyen-Jeanneret and Alavez said they were confident they could do it.

“I just have faith in our community,” said Alavez, 18, of Quogue, who has spent every weekday after school and sometimes between classes reaching out to potential donors while balancing schoolwork and college applications. “We’ll pull through. We’re ambitious enough and we’re passionate enough about it to get this done.”

The project’s proposal states the group’s goal is not only to spread its support of renewable energy to Westhampton Beach Elementary School, but to “provide the students and the community with a visual of our future with sustainable energy.”

Donations can be made via checks payable to Westhampton Beach UFSD. “Cure-Wind Turbine” must be added to the check’s memo line.

More information on the wind turbine project, including how to donate, is available at Westhampton Beach Village’s website, www.westhamptonbeach.org.