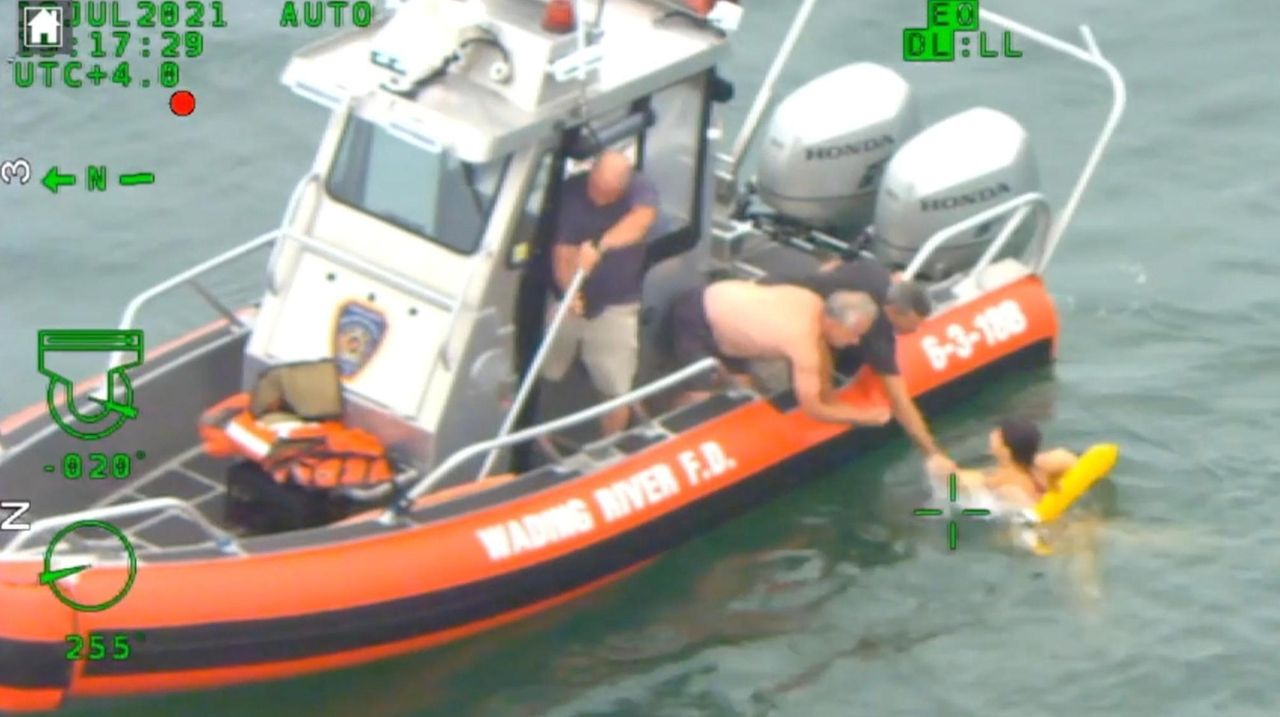 A woman who floated about a mile off shore while swimming in Long Island Sound in Shoreham Sunday morning was rescued in a dramatic scene captured on video from a police helicopter.

Johanna Scheiber, 21, from Sayville, was taken to Peconic Bay Medical Center for an evaluation.

Police said they learned about the distressed swimmer when her friend called 911 from Shoreham Beach about 6:50 a.m., reporting she had lost sight of Scheiber in Long Island Sound, according to police. Police said members of the Suffolk police Marine Bureau, the Seventh Precinct and the Aviation Section responded.

Aviation Section Sgt. John Vahey, Officer David Rosante and Stony Brook University Hospital Flight Paramedic Chris Barnes, who were in the police helicopter, spotted Scheiber in the water about a mile from shore, police said. Barnes and Rosante dropped an inflatable flotation device in the water, which she used to stay afloat.

The video shows a Wading River Fire Department boat moving quickly toward her, then slowing down to drift closer. Fire department members on the boat can be seen calling out and encouraging her to come to the boat, which then moved a bit closer. Scheiber made her way to the side, where two members pulled her aboard, the video showed. Police said they brought her to shore.

Denise Gluck, first assistant chief at Wading River Fire Department and one of the first responders Sunday, said Scheiber and two friends went for a swim in the morning.

Scheiber swam "a little too far out and couldn’t get back" to the shore, she said. One friend tried to swim out but gave up after realizing she was too far away. The other called 911.

"She was OK," Gluck said of Scheiber. "She was a little shaken up."

Gluck, a 16-year veteran with the department, said members respond to eight to 10 water rescues throughout the summer season, typically involving kayakers.

"To have an event like this where there’s a good outcome and something positive happened from it, it makes you feel good, that what you do is worthwhile," she said.