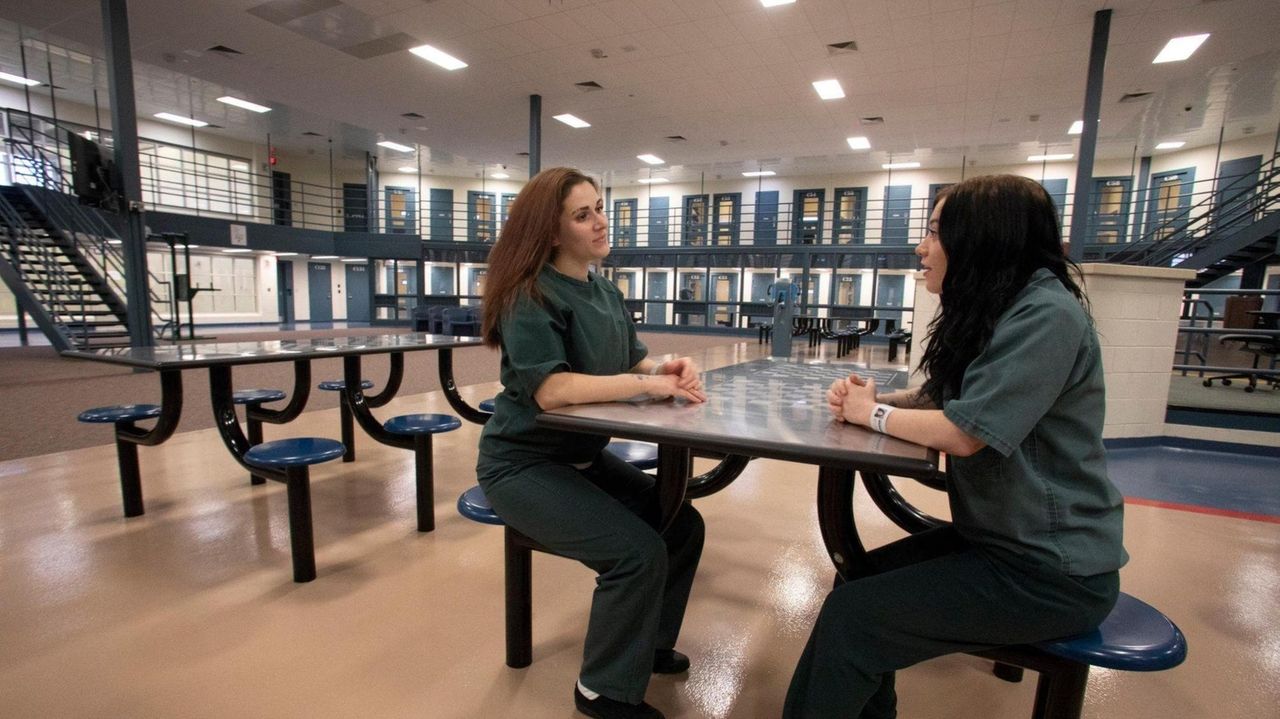 Suffolk County sheriff's new program, "Choose to Thrive," is a holistic approach to help female inmates with such services as parenting skills and trauma counseling, to help them return to life after prison. Credit: Jessica Rotkiewicz

Suffolk County inmate Jessie Ernst expected a feeling of hopelessness at the Yaphank jail, but what she asked for and got was downward dog — yoga classes once a week.

"I was surprised when I came here at how much they had," said Ernst, 22, of Mastic Beach, who was transferred from the Riverhead jail in October to wait for sentencing on an attempted drug sale charge. "It was a different feeling, a different vibe. It was relief. It was like a weight off our shoulders."

Ernst is part of the Suffolk County sheriff's new program, "Choose to Thrive," a holistic approach to helping women behind bars get back into mainstream society. From trauma counseling to assistance for the inmates' children, many of the services have been offered for years in some fashion to Suffolk inmates.

But now, they've been pooled together into a structured, regular program, like a get-your-life-back college in which the women can choose the courses or services they want, including yoga poses like downward dog that help them relax and focus their minds.

Years after their release, officials said, the women will also have the choice of keeping in touch with the nonprofits they deal with in jail. They can ask for help in getting such things as a plane ticket to join their children so they won't have to go back to any traffickers and pimps.

"We're really trying to identify segments of the population so we can target their needs," Sheriff Errol Toulon Jr. said Monday during the program's ribbon-cutting ceremony with county and nonprofit officials.

Choose to Thrive started in October, following the recent launches of similar programs for senior inmates, youths ages 18 to 25 and veterans. The women-only pod at the Yaphank facility can house up to 60 people, and currently, 39 out of the 49 women there have elected to participate. The facility houses inmates who don't have violence or discipline issues. Candidates for the program are those with a medium to high risk of returning to jail. The option to join is up to each inmate, sheriff's officials said, but the boredom of jail life often drives up interest in the services, held in the common area or small rooms.

Nonprofits make up the backbone of the program, delivering counseling and other benefits at no charge. The New Hour for Woman and Children, located in Brentwood, makes sure children visit their mothers and mothers learn parenting skills. Black Sheep People, started by a life coach in Valley Stream, holds the yoga classes once a week.

Other groups include Leaving the Outlaw Behind, Family League Services and Journey for a Difference, but their mission is to build up the women's skills as their cases wind through court or as they serve their time.

"From my experience, when you make a real connection with someone going through what's probably the hardest time in their lives, you don't want to lose that because it's in that space where rehabilitation and lasting change happens," Jennifer Hernandez, co-founder of Bohemia-based Empowerment Collaborative of Long Island, said at the ribbon-cutting. Her group counts conflict resolution and trauma counseling among its services.

Suffolk County Legis. Bridget Fleming (D-Sag Harbor) said she has been concerned about jails meeting the needs of women, such as providing hygiene products.

"Jails were historically built by men for men," she said.

As part of Choose to Thrive, there's even a nursery, livened up recently by three infants.

Toulon said officials will evaluate the program at six months and one year. He wants to add vocational training, such as culinary courses, and perhaps a pet on the premises.

A drug addict who violated probation, Samantha Cotroneo, 27, of Centereach, said she's been in jail every other year since 2013 and had no hope after landing at Riverhead jail in August.

"I thought I was just going to do my time, go home and go back to the same routine," said Cotroneo, who has her 2-year-old son's name tatooed on her arm.

She said she arrived at Yaphank "angry" at herself, but the new jail program has turned around her mindset, enough to joke to a jail captain Monday about a better life outside the bars. "If I'm doing the right thing," Cotroneo told him, "I'll let you know."

CORRECTION:  A prior version of this story misspelled Jessie Ernst's name.