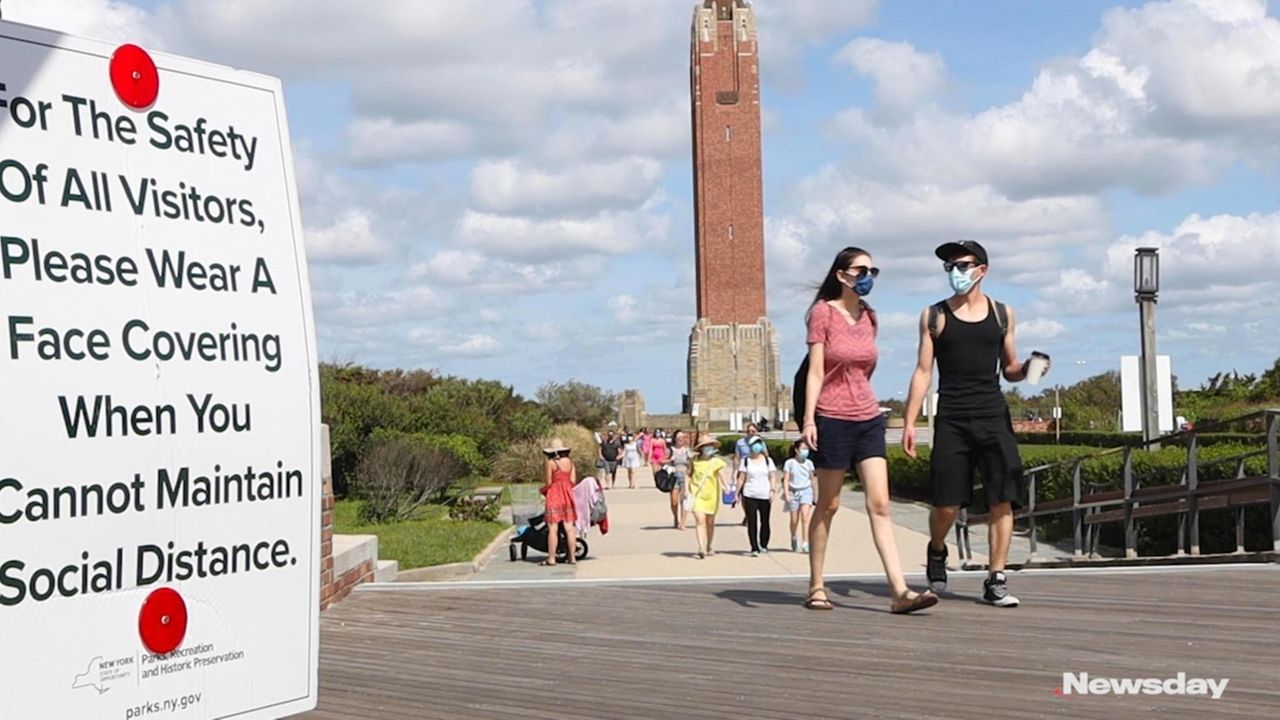 This story was reported by Antonio Planas and David M. Schwartz. It was written by Nicholas Spangler

On Labor Day, as a strange, long, hot summer drew to a close, Long Islanders by the thousands donned their masks and visited parks, beaches and pools.

Even in this season of Zoom and social distancing, they biked and grilled and lounged. For some, doing so was a kind of triumph.

At Jones Beach, Kenneth Irby, 42, of Baldwin, who works in sales, contracted COVID-19 in March and spent part of that month in quarantined solitude covered in blankets with a temperature of 103. His breathing improved in May and he’s been exercising since June, he said.

Work, and the lack of it, was a topic of conversation on a holiday dedicated to the American worker. At Averill Boulevard Park in Elmont, Paola Pazmino, 32, of Elmont, said she'd been furloughed from her job as a daycare teacher.

With her boyfriend, Jeffrey Suazo, 36, and their children Micaella, 6, and Penelope, 3, Pazmino said she'd spent the summer at home taking care of the children. “It was hard not to be as active as we usually are in the summer,” she said. “The kids got stir crazy. You could tell their change in personality. I got cabin fever.”

Also at the park were Kenny King, 59, of Elmont, and Joann King, 60, of Elmont. Kenny King, a retired correctional officer, said he'd worked security over the summer for Valley Stream School District events. But, kept home more than he was accustomed, he'd started taking road trips: Southern New Jersey, Pennsylvania, Connecticut. “Every once in a while, I’d jump in my car and take a little ride, whether it’s an hour or two hours,” King said.

It was a socially distanced summer for Jenny Fan, 30, of East Meadow, who moved to Long Island from Albany in April to work for an e-commerce company. She visited virtually with friends from Albany on FaceTime and connected to family in China through a smart-phone app. "People are social creatures," she said.

Keeping a distance was emotionally rough, said Chloe Knudtson, 24, of Central Islip, who met her college friend Sydney McGinniss with beach bags and packed lunches for a day at Heckscher State Park. Summer was “really weird, trying to make friends,” Knudtson said. She’d seen family over the last few months, but only outside, and worried what would happen after the weather turns colder, particularly in her native Wisconsin, where she hopes to return for Christmas.

Other Long Islanders said they'd cancelled travel plans or were staying closer to home than they wanted. “I’m not ready yet to get on an airplane,” said Nancy Atkinson, 75, of Bayport, taking a break from a Heckscher ride with Ed Broderick, 73, of Lindenhurst. They avoided crowded ocean beaches this summer but kept up with their hiking and biking, they said.

At Jones Beach, Tony Perelli, 22, of Farmingdale, who works in information technology, said that “being stuck in the house and not having any interaction with human beings, it’s like being in solitary confinement.” He was making his first trip to Jones Beach, he said: “Normally, during the summer, I’m going out more.” To cope, he’s had “a lot of Zoom hangouts” with friends. “We took the freedom we had to go out and have a good time a little bit for granted,” he said.

Carol Varsalona, 70, an educational consultant from Rockville Centre, said in past summers, she and her family were frequent visitors to the shores of Jones Beach and Long Beach. But this summer, “We haven’t even bought a season pass.” There were happier milestones, too.

Back at Heckscher, Cody Donadio, 6, of West Islip, learned “how to use the Wii,” he said, referring to the popular video game system. His mother, Sandy Scherrer, felt the bigger accomplishment was that he’d learned to read. “We don’t want summer to end, but we’re excited for school to begin,” Scherrer said. Children “need time to be around other kids and professional educators.”

On this last unofficial day of summer the Scherrer’s neighbors, Jennifer Stellwag, 39, and her sons Liam, 6, and C.J., 3, averted potential crisis when C.J.’s rainbow snow cone plunged to the pavement by rinsing off the dessert. It was a quick, decisive action that might not have met CDC guidelines. “Moms do what they have to do to avoid tantrums,” Stellwag said.

On a beach blanket at Heckscher, Dianne Taggert, 39, a speech therapist from Jamaica, Queens, said she and her six children had kept to themselves most of the summer, playing volleyball, Uno and dominoes as a family. “It’s forced us to be creative and innovative,” she said. “We’ve never had a summer like this.”