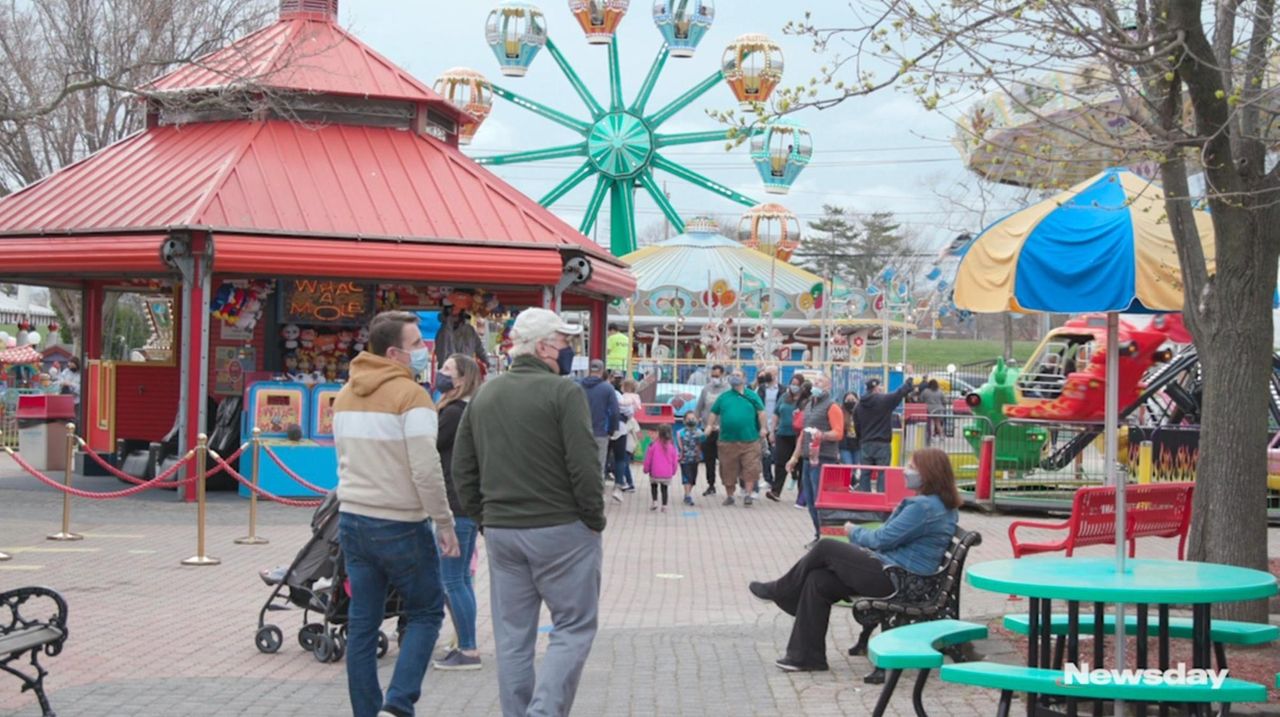 For over a year, Adventureland in East Farmingdale has been closed due to the pandemic. On Friday, the park opened to a warm welcome. Newsday’s Steve Langford has more. Credit: Kendall Rodriguez

Long Islanders may have to brace for another pandemic summer, one that could resemble last year's, with beach and crowd restrictions in place. But local officials are hoping to bring back a sense of normalcy, and hope that Gov. Andrew M. Cuomo eases constraints as the pandemic wanes and vaccinations increase.

There have been some signs of classic Long Island staples returning, such as the Bethpage Air Show at Jones Beach — it was canceled last year — but with crowds limited to 50%. And Adventureland reopened to the public Saturday.

Beaches and parks will again be popular, there is hope the Long Island Ducks will play ball, and shows and concerts are on track to come back. State officials recently allowed some indoor venues to reopen at 10% capacity, and some outdoor facilities to reopen at 20%.

Nassau County Executive Laura Curran said continued reopening and easing of restrictions will depend on state guidance and the sudden announcements Cuomo has become known for.

"It is challenging. The sooner we get guidance, the better, and we can put plans in place," she said. "We know how to reopen safely in Nassau County and we want residents to enjoy the fun and beauty of a Long Island summer."

The county will build on outdoor dining through the summer, clearing space on county roads and allowing local municipalities to open streets. And, Curran noted, parks have been open throughout the pandemic.

The county has led the state in vaccinations, with 42% of residents receiving their first dose, she said.

"Summer on Long Island is a big deal and a reason why a lot of people live here," he said. "My expectation is we’re going to have a great summer here."

A familiar scene at beaches

Long Island and state beaches will still be capped at 50% capacity, with state officials urging beachgoers to go only with members of their immediate household, wear masks when walking, and keep beach blankets 10 feet apart.

Most beaches in New York City, along with Nassau and Suffolk counties, are planning to open by Memorial Day, albeit with some limitations.

Hempstead Town beaches in Point Lookout and Lido Beach will be limited to only Nassau County and town residents while at reduced capacity. Hempstead Supervisor Don Clavin said he wanted to give priority to taxpayers while preparing for the same guidelines as last year.

"We have to follow state guidance but we’re preparing to eventually open 100%, and if they allow us to expand, we’ll be ready," Clavin said. "I expect this to be the season of staycations, and people are going to stay close to home but enjoy wonderful features we have. Right now we anticipate the same services as last year and we’re preparing for an identical season."

State officials warned that last year, state parks such as Jones Beach and Sunken Meadow filled up in the early hours. They urged travelers to check capacity online.

Long Beach is making a series of plans depending on the lifting of state restrictions. That city also limited beaches to residents last year while New York City beaches were closed.

Long Beach will begin to sell electronic seasonal beach passes May 3 while considering whether to sell individual daily visitor passes this summer.

"I guess the operative word is contingency. Last year we got the OK to open literally days before Memorial Day weekend," said Joe Brand, Long Beach commissioner of parks and recreation. "We don’t want to shun people away, but we have to accommodate the numbers set by the state in the safest way possible. The easiest way is to say residents only, but we do have a plan to allow nonresidents in a limited capacity, but it’s not a definite thing."

Long Beach officials said that this year they plan to avoid any curfew to close the beach or boardwalk like last year, when the beach was overwhelmed — including by large parties after hours.

"Last year everything was new to us and we were flying by the seat of [our] pants. If there were too many people, we had to shut the beach down to nonresidents," Brand said. "The public has been through this and last year was stuck staying in the house. We became the only recreational activity. The only place to go was the beach."

This year also brings the return of amusement parks such as Adventureland in East Farmingdale.

Bellone on Friday welcomed season-pass holders to Adventureland for the first time in more than a year. The park, which opened to the public Saturday, is being kept at 33% capacity.

"Adventureland is where I’ve always brought my kids," Bellone said. "To have kids running around on rides again is a great thing to see and another indication we’re coming back strong."

The quack of the bat

Bellone said the county is working on a plan with the state to return Long Island Ducks baseball to Central Islip. The team is part of the Atlantic League, which canceled its 2020 season due to pandemic concerns.

Bellone and the team are asking the state to consider allowing smaller ballparks, such as Fairfield Properties Ballpark, where the Ducks play, to increase capacity to 50%, rather than adhere to standards of 20% set for major league stadiums. The requested increase would allow about 3,000 fans in the ballpark.

"We need to increase capacity and need to be in a position with more vaccinations to reopen," Bellone said. "As long as you have good protocols outdoors, it’s as safe as can be. What a shot in arms and how great for the region to welcome back baseball to the Island."