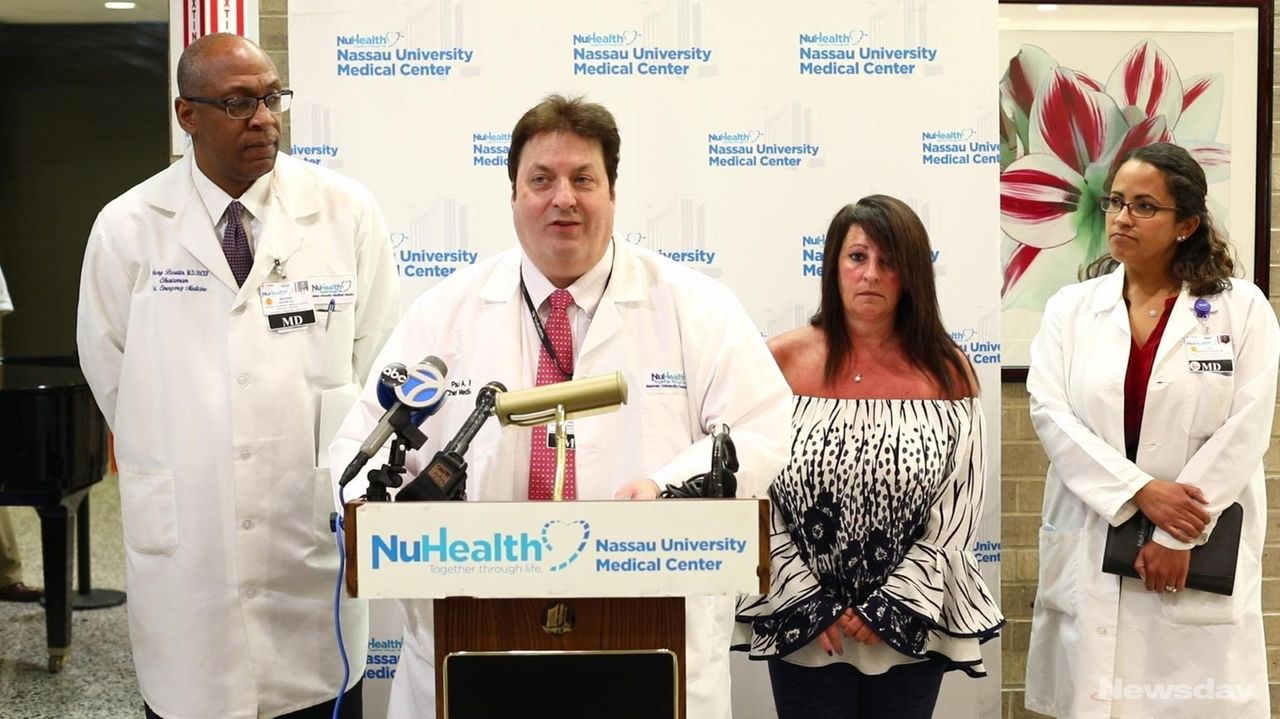 Nassau University Medical Center doctors warn people on Monday about being safe while enjoying summertime activities. They suggest keeping hydrated during the current heat wave and keep your eye on children around the pool and ocean. Credit: Newsday / Chris Ware

With  summer in full swing, medical experts on Monday urged Long Islanders to practice caution as they take to the beach, head out on the water and sip some libations.

Noting that the heat that has gripped the region is expected to extend through the holiday week, doctors at a news conference at Nassau University Medical Center offered some advice as people enjoy the July 4 holiday week: Have fun, but don't be foolish.

The East Meadow hospital is already seeing people coming into the emergency room with heat-related problems, he said.

Dr. Anthony Boutin, head of emergency care there, rattled off some common-sense precautions.

“Stay cool, stay inside, wear loose clothing, drink lots of fluids,” Boutin said. “And if you have some elderly people who live nearby, make sure to check on them.”

People in the medical field have a nickname for this time of the year: trauma season, the doctors said. Children, home from school, experience twice the amount of traumatic injuries during the summer months. And adult trauma cases jump some 25 percent, according to doctors.

This is also the peak season for drowning, the leading cause of avoidable deaths among children ages 1 through 4, the release said.

June also marked the start of boating and beach season on Long Island and with July Fourth approaching, boating safety is in the spotlight.

Gina Lieneck, a Deer Park mother whose daughter died in a 2005 boating crash, was at the news conference to offer advice to boaters this July Fourth.

"It's a big holiday. There will be a lot of people out on boats," said Lieneck, 48. “Don’t get drunk and drive the boat. The heat, the motion of the water, they enhance the effects of the alcohol.”

Lieneck, her husband, Frank, and their two daughters were out on the water, puttering home from Fire Island, on Aug. 17, 2005. In what seemed like an instant, a heavier boat came up and slammed into the Lienecks. Her daughter, Brianna was sitting on the side that was hit, and was killed.

Lieneck is so determined to make the waters safer that she has become an advocate for boat safety and at the Statehouse in Albany, pushing for a law that requires all motorboat operators to take a class in person.

"Please be concerned for the lives around you," she said.

Dr. Pipia said with a little common sense, people can make the holiday what it's intended to be: A joyful celebration.