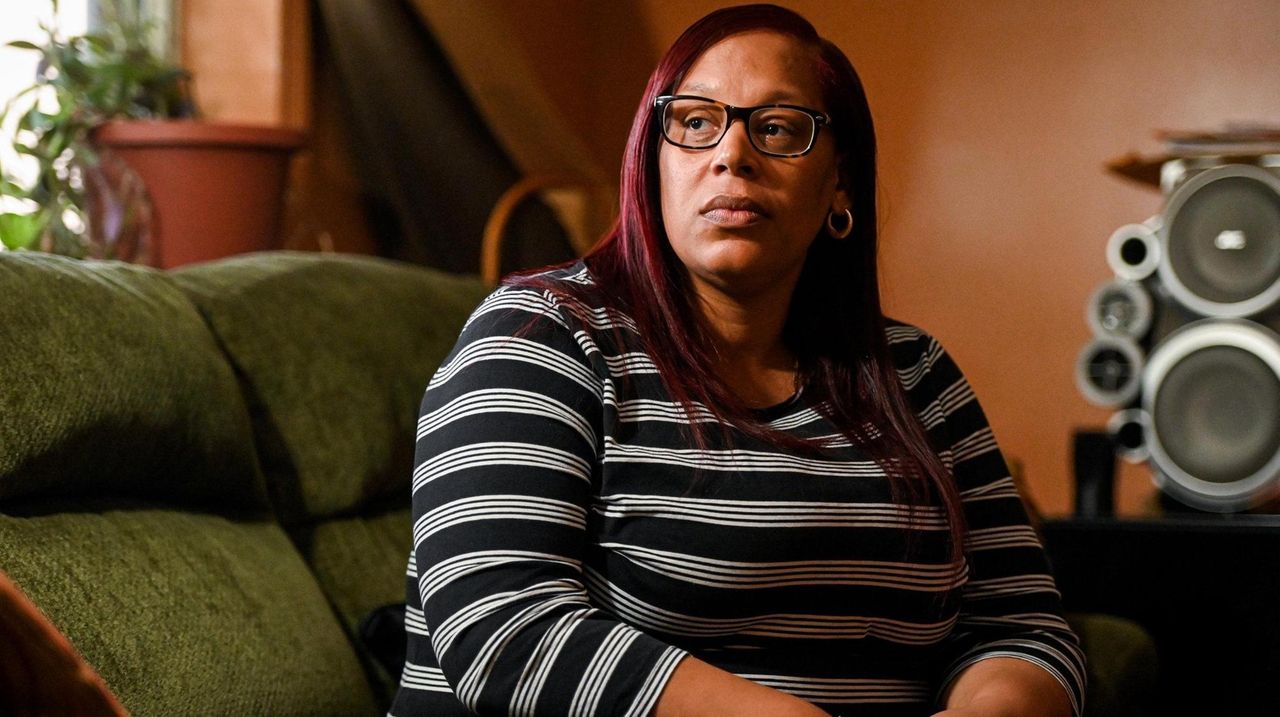 Beth Henry of Massapequa struggles with a thyroid problem that she blames on superstorm Sandy. Credit: Linda Rosier

Superstorm Sandy cost Long Islanders dearly with their health. And, seven years later, they're still paying — both financially and emotionally.

A new analysis from the Natural Resources Defense Council and the University of California-San Francisco puts Sandy's health-related losses for the Island at $156.4 million, a total that researchers arrived at by sifting through numbers from government, the Red Cross and other studies.

But the environmental scientists behind the report believe the total dollar amount probably is much higher because of illnesses never directly linked to the storm and the incalculable toll that stress can take.

Marian Goldstein, for example, developed lung cancer roughly a year after Sandy ravaged her Baldwin Harbor home. And she still suffers from what she has diagnosed as post-traumatic stress disorder.

"I'll never know if Sandy caused it," Goldstein said. "I suspect it."

The same goes for Melissa Miller of Long Beach and Beth Henry, who lives in Massapequa. Miller's 13-year-old daughter has asthma now. And Henry and her 13-year-year-old daughter struggle with thyroid problems.

They both lay the blame on Sandy's dirty floodwaters. Their doctors agreed there might be a connection but can't be sure.

Others tell the same story, with different details.

Mike Fleming Jr. is still trying deal with the loss of his dad.

"That tragedy left a big hole in our lives," said Fleming, of Holtsville. "And it's not been replaced."

Along with Sandy, the researchers conducted nine other case studies of what they describe as climate-sensitive events in 2012, including algae blooms in Florida, wildfires in Colorado and an outbreak of West Nile virus in Texas.

The health fallout of all 10 events totaled $10 billion, a figure the scientists reached by adding up the costs of everything from emergency room visits to prescription drugs to the value of a lost life.

For Hofstra University meteorologist Jase Bernhardt, the analysis advances the discussion of how climate affects health.

“This is a new take on it,” said Bernhardt, who oversees the school's meteorology department. “It’s not just the impact on things being destroyed. It’s the toll on human health.”

When all was said and done, Sandy took the lives of 14 Long Islanders and sent nearly 1,000 to the hospital.

The deaths — not medical bills — are what made Sandy's health-related costs soar, said Vijay Limaye, an environmental health scientist at the Natural Resources Defense Council who led the research

As Limaye explained it, the value is the average amount of what people would pay to reduce their risk of death. The $9 million figure is estimated through surveys, he said, and is commonly used by federal agencies.

Most storm damage estimates leave out health-related costs because they are tough to get a handle on — the numbers can be incomplete or a medical condition can't be directly linked to whatever happened in nature, Limaye said.

Still, Limaye said, health costs are critical for two reasons: They serve as proof that climate change represents a public health crisis and they can help public agencies prepare for the natural disasters to come.

"We're trying to shed new light on the health impacts of events like Sandy," Limaye said. "It's important in terms of understanding the true costs and burdens of these events."

“Hurricanes hit Long Island; it’s going to keep happening,” he said. “Our preparedness was lacking for Hurricane Sandy. So maybe the next time it will be better.”

"Mommy, I can't breathe," Miller, 43, recalled her daughter saying. "Mom, it hurts when I breathe."

Today, at 13, Nevaeh has asthma, a chronic lung condition that Miller is sure was brought on by the black mold that grew out of Sandy's floodwaters.

The inhalers that Nevaeh needs to manage her asthma cost $60 each and every doctor's appointment means a $25 co-payment, she said.

Grace Jegede, 61, started coughing after spending day after day clearing out the water from the lower floor of her Baldwin home. She stayed in the house even when the electricity and heat went out.

And the cough went on for months.

Then, there were all the phone calls trying to get help and the hassle with her insurance company.

Stress can do crazy things to the body.

And Beth Henry stressed over Sandy. And her daughter, Ella, who was 6 at the time, picked up on her stress.

A couple of years after the storm, Ella collapsed at a dance competition. Doctors diagnosed her with Hashimoto's disease, an autoimmune disease that damages the thyroid.

Another two years passed by. Ella developed another autoimmune disease, vitiligo, which causes patches of her skin to look lighter.

Henry figures Ella will have to deal with the fallout of the diseases — the fatigue, the weight gain, the blotches — for the rest of her life.

About three years ago, Henry found herself beyond tired and getting a lot of headaches. Her doctor found noncancerous tumors on her thyroid.

The bills for everything — surgery, doctors, bone scans, blood work — hit about $40,000, which insurance mostly covered.

Today, she spends $4,500 a year on prescription drugs and doctor visits that her health plan won't cover.

"It's ongoing," Henry said of the medical costs. "Thank God we have insurance or it would be horrific."

Mike Fleming Jr. takes a big breath and lets out a heavy sigh.

His dad, Michael Fleming, would be 89 if Sandy hadn't taken him away.

"He opened the screen door exactly at the most inopportune time," Fleming, 59, said of his father, a retired superintendent in the power department of the New York City subway system. "A gust of wind swung open the door and he hung on. He cracked his head at the bottom of the front stoop."

His father never woke up.

The day Sandy landed, Fleming had scheduled a contractor to replace the stoop and install a railing.

"It took me a long time to get past that," Fleming said.

Throwing out muck-covered furniture and soggy photo albums, then ripping out sheet rock and insulation from her home in Lawrence consumed Helene Moran for weeks.

A few months later, in February 2013, Moran learned she had breast cancer.

Moran underwent a lumpectomy, followed by three months of chemotherapy and seven weeks of radiation treatments.

Insurance paid most of the bills, which added up to tens of thousands of dollars. Today, Moran has her $25 co-payments and a prescription to keep the cancer at bay.

This spring, she asked her doctor for something for her nerves.

"I was having trouble sleeping," she said. "Due to the storm and the contractors. It's a whole vicious cycle."

Marian Goldstein stood barefoot in gunk up to her calves, scrubbing her downstairs.

About a year later, doctors diagnosed Goldstein with lung cancer. She couldn't help but think of all those hours in the sludge.

Surgeons removed the lower part of her left lung along with some lymph nodes. Then, she started having nosebleeds.

"I was depressed," said Goldstein, 84. "I couldn't sleep, but I couldn't stay awake. I didn't want to talk to anybody. Nothing felt right."

The stress, she is sure, gave her post-traumatic stress disorder; she hasn't been formally diagnosed, though.

"When I hear there's going to be a heavy rain, I get panicky," Goldstein said. "I get this terrible feeling. I don't want to be left alone."

After Sandy, most back in their homes — but they're not quite wholeSeven years later, some struggle in an aftermath fraught with mountains of bills, legal battles with contractors and other obstacles.

More people have died of COVID-19 in NY than state publicly reports, fed data shows
'Sensitive' videos on race, sex, to be restricted in Smithtown schools
1:37
'A weight and a blessing,' says daughter who takes over the reins at LI church
Asking the Clergy: What is a good summer read?
Curran seeks AG opinion on protection for police, first responders
4:47
Pressure mounting for Gov. Cuomo to resign as Jacobs, allies abandon him
Didn’t find what you were looking for?