Tom Collings, left, of Bellmore, prepares to enter the bay near Billy Joel Park in Cold Spring Harbor with help from his friend David Komatsu, of Huntington, on Sunday. Collings left shortly after 9 a.m. for his swim.     Credit: James Carbone

Tom Collings is planning to take a nine-mile swim Sunday in honor of Rosy, his 15-year-old golden retriever mix who died last month.

But the Bellmore man is also doing it for others like her — rescue dogs in shelters, marking time until their forever home comes along.

"She was my buddy," said Collings, who turned 70 on Oct. 8. "It just breaks my heart, you know, when folks go to pet shops or to breeders when there’s these thousands of beautiful dogs in the shelter just waiting for homes."

To raise awareness and money for a Wantagh animal rescue nonprofit, Collings said he will swim from a public boat ramp at Billy Joel Park in Cold Spring Harbor to Lloyd Harbor and back. His set out on his swim Sunday. 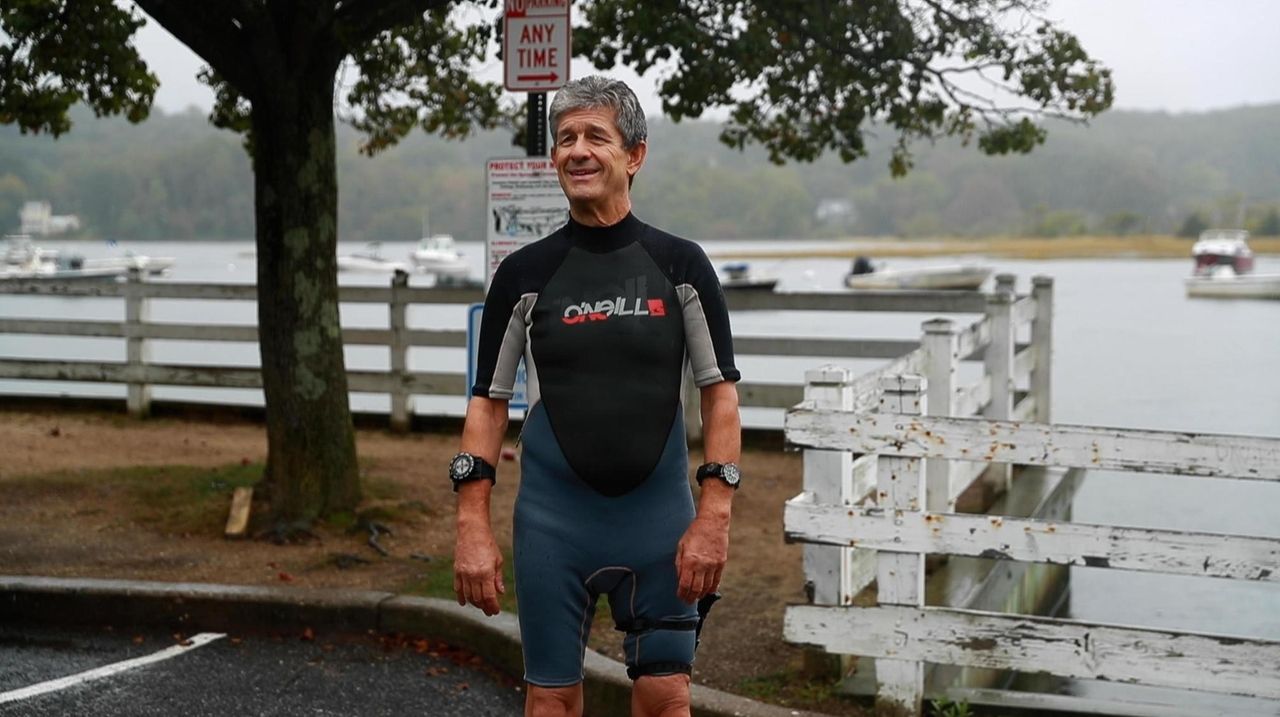 Collings, a retired parole officer from the state Department of Corrections and Community Supervision, said he will be accompanied by two friends on kayaks so that people on water scooters or boats can better spot him.

"We [will] find out," he said when asked whether he can handle the distance. "I get into a zone where even after three miles, I’m only going home because it’s time for dinner. I don’t really feel like I want to stop. And I also know how to relax. I just become a piece of seaweed once in a while and just go into meditation and float around and regain energy."

Collings said he does not plan to get out of the water during what he estimated to be a seven- to nine-hour swim but would take breaks. His kayaker friends will offer him water or juice during those breaks, he said.

Joanne Anderson, outreach coordinator for Last Hope Animal Rescue and Rehabilitation, said Collings didn’t adopt from the organization but heard of its work through a mutual friend.

"This is so unique, as far as a fundraiser [goes]," Anderson said. "We’re used to doing sit-down dinners, supermarket bingos and things like that."

The 40-year-old organization typically adopts out 300 dogs and 500 cats every year, Anderson said. The money raised through Collings’ swim would go toward veterinarian care for older animals and those with chronic illnesses, she said.

Collings said he has taken about two dozen dogs off the street, half of whom he ended up keeping. He found Rosy in a yard during his multiple trips to locate a parolee in Roosevelt 14 years ago.

"Like most of the street dogs and stray dogs, I open the door on my part. And it’s up to them," he said. "If they get in, they go with me. And if they don’t, that was their choice. And Rosy jumped in."

"There’s thousands of animals in the shelters that couldn’t get adopted," he said. "That’s always been sort of a pain in my life that I couldn’t do more. So this is a little thing I could do."