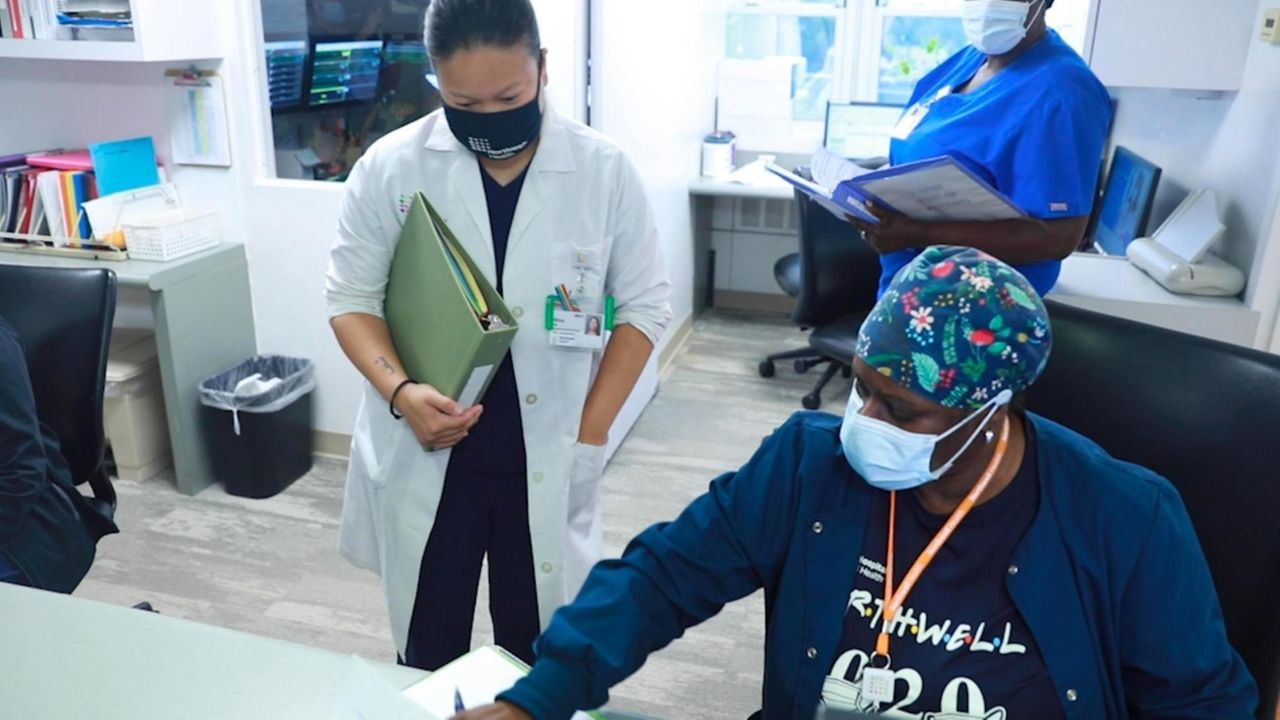 Nina Ng  was sent on a medical mission to the border in Reynosa, Mexico with the Global Response Management team. After returning, Ng is urging the public and her fellow medical professionals to help after she saw 200 patients in the 5 days. Credit: Newsday / Reece T. Williams

Women struggling with untreated cancer, a teen with a neurological disorder left untreated for years, and children walking hundreds of miles, often alone, and without shoes.

These migrants from Central American countries, many fleeing gang violence and poverty in their native lands, were among the hundreds that Nina Ng, a nurse from Syosset Hospital, tried to help in her trip this month to Mexico.

Their stories of suffering and sacrifice have stayed with the registered nurse from Levittown, even as she plans yet another mission of mercy.

"It was an emotional trip," said Ng, 34, the assistant director of nursing at Syosset Hospital. "I'd do my job every day and sometime find myself in the hotel and breakdown and cry. And mentally wonder: 'how is this even allowed in the world?'"

Ng has been on other humanitarian missions. The daughter of Chinese immigrants, she's traveled during the past decade to Haiti, Bangladesh, Iraq and Matamoros, Mexico.

But the humanitarian crisis at the southern border felt different, Ng said Tuesday as she recounted her trip for reporters.

She flew to McAllen, Texas — on her own dime — and would drive daily across the border into Reynosa, a city on the southern bank of the Rio Grande.

Ng and a skeletal staff — a pediatrician from San Antonio, an emergency room physician from Florida and a field coordinator — treated up to 50 migrants per day from a makeshift tent.

"The work that Nina does, whether it’s at the U.S.-Mexican border or abroad in Bangladesh, all goes back to nursing, and what it means to be a nurse," said Marianna Vazquez, chief nursing officer and associate executive director, Syosset and Plainview hospitals.

"We are proud of her initiative to give back and help others here when she’s in Syosset Hospital and also when she is doing a medical mission."

In total, Ng and her team treated more than 200 patients in five days.

"You're helping people who really have nothing and your little interaction with them makes their day," she said. "The kids are playing with nothing; we give lollipops to the kids and put a smile on their face."

"I always say that if I can't do something for them medically at least I can have a good interaction with them."

The stories, she said, were heartbreaking.

A 5-year-old unaccompanied minor — the child's parents may have been killed or kidnapped along the way. A 14-year-old boy with a neurological disorder, also traveling alone, as his mother was already in the United States and his father was recently murdered.

A 34-year-old woman complaining about pain in her abdomen and left breast for more than a year, who almost undoubtedly was suffering with cancer, Ng said. The woman later admitted she was raped in 2020 and still has an STD.

"You really have to focus on what you can do with the resources that you have," said Andrea Leiner, director of strategic planning for Global Response Management, which was established by Iraq and Afghanistan U.S. veterans. "There's no hospital to send them to. No case management. No social workers. You literally have what's in your bin to treat people with and that's all you can do."

The 12-hour days took their toll on Ng. Small things would trigger bursts of anger. She'd start to shut down emotionally, finding it difficult to open up, even to her colleagues, eventually turning to a therapist back in the U.S.

But yet, Ng is anxious to return — hopefully next time with other health care professionals from Long Island and beyond.

"This is one of the most gratifying experiences of my life," said. "I have so many resources here. I have a job. I have a house. I can travel anywhere I want for fun. So why not spend a little time giving back to people that have nothing?"