From left, firefighter Josh Kerr, acting officer of Engine 584, ex-chief Robert Kaplan, officer of Ladder 5855, and Capt. William Sauberman, officer of Engine Company 5, who rescued a 71-year-old man Sunday afternoon, pulling him from a kitchen fire in his home inside a senior living complex, stand in the Syosset firehouse Monday. Credit: Howard Schnapp

Syosset firefighters rescued a 71-year-old man Sunday afternoon, pulling him from a kitchen fire in his home inside a senior living complex, officials said.

The man, whose name was not released, was transported to Nassau University Medical Center. He was conscious and alert at the hospital, and able to speak with fire investigators, Nassau County Assistant Chief Fire Marshal Michael Uttaro said. His condition was not available Monday.

The cause of the fire, which started in the kitchen of the apartment complex at 1514 Green Way in Woodbury, is "not suspicious" and was deemed accidental, stemming from the stovetop, Uttaro said.

The Syosset Volunteer Fire Department responded to the call at 3:53 p.m. for an automatic carbon monoxide detector activation at the complex, according to a news release. 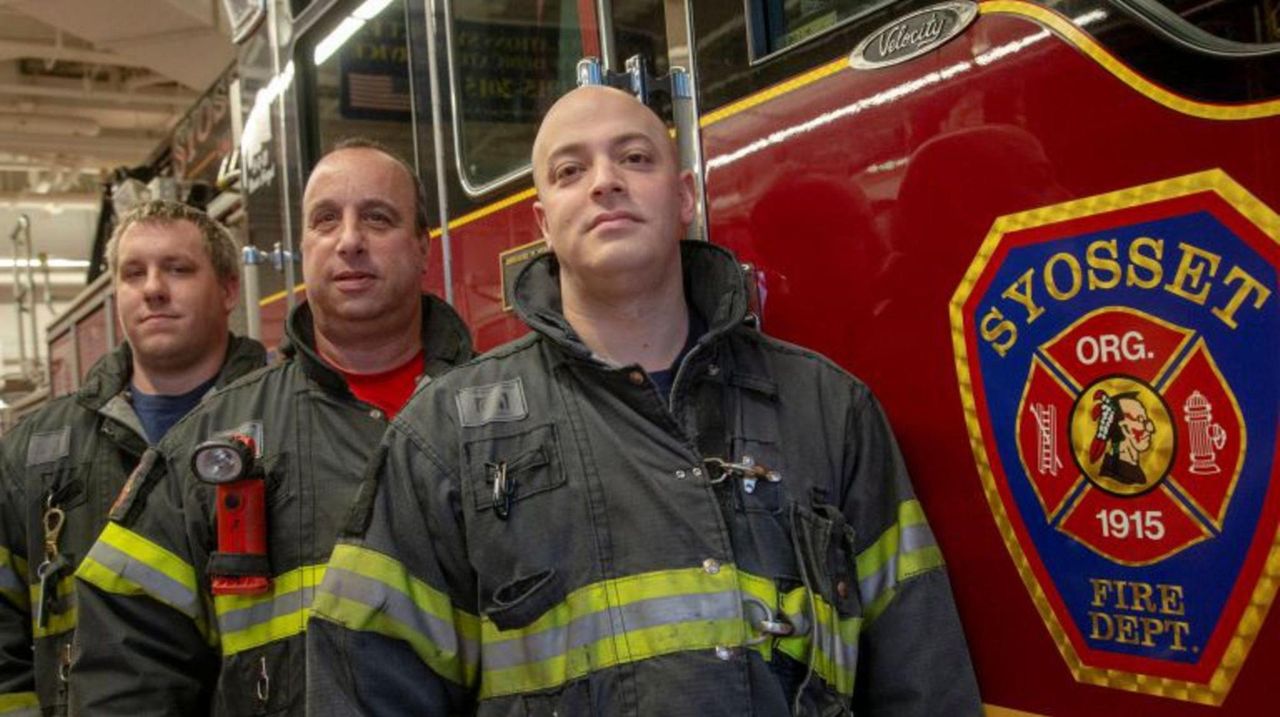 Second Assistant Chief Kenneth O’Brien, the first to arrive on the scene, received no response when he knocked on the door. Noticing a burning smell, he called for a hose line to be stretched to the apartment, according to the release.

Capt. William Sauberman, officer of Engine Company 5, forced his way into the apartment. He, firefighter Josh Kerr, the acting officer of Engine 584, and ex-chief Robert Kaplan began searching the smoke-filled apartment for residents.

It was “heavy smoke” conditions from floor to ceiling, said Kaplan, officer of Ladder 5855. “You had very, very limited visibility. We knew the apartment was on fire.”

They heard a groan coming from the kitchen and found the victim face down on the floor, Sauberman said.

After a quick assessment to see if he was still breathing, the men carried him outside, Sauberman said.

The victim, who was unconscious, was cared for at the scene by Syosset Fire Department Emergency Medical Service members. He regained consciousness en route to the hospital, firefighters said.

“He was probably minutes from not making it. The apartment was so heavy from smoke,” Kaplan said. “Moving him out quickly was what saved him.”

It was “rewarding,” Sauberman said of the rescue. “As a team effort, we were able to get this person the help they needed.”