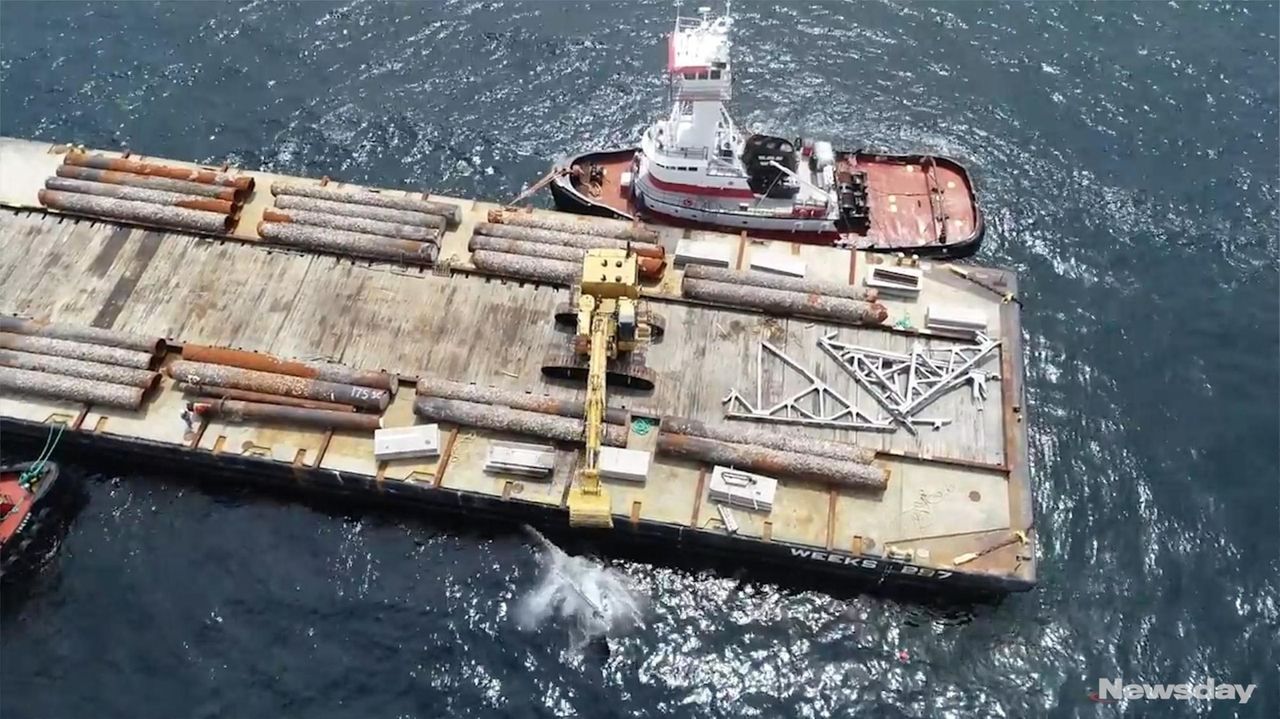 Gov. Andrew M. Cuomo traveled to Shinnecock Inlet on Thursday morning to kick off construction of one of the East Coast’s largest artificial reef programs, starting off the coast of Hampton Bays.

The Shinnecock Inlet portion of the work included dropping 885 tons of material from the dismantled Tappan Zee Bridge and scuttling an old canal vessel called The Reliable.

Sections of the cantilever bridge were visible from a fishing boat chartered by the state to bring dignitaries and the media to the site, where barges, cranes and a fleet of tugboats worked through the day.

Material is being placed in an area 2 miles from shore, 85 feet deep in 35 acres of sea bottom. Six reefs are being constructed this year out of a planned 12.

Creation of the reefs using cleaned and inspected metals is generally applauded by fishing boat captains and diving enthusiasts because it attracts fish. For the state it is a way to more cheaply dispose of material that would have cost millions more to dump in landfills.

One local fisherman applauded the move, while also continuing to push the state to expand access to fluke, black sea bass and other fisheries. Federal and interstate regulators have sought to put new limits on New York’s access.

“It’s a good program. Thank you for enhancing our reefs — now we have to enhance our fishing quota,” said Steve Witthuhn, a Montauk charterboat captain who sits on the Marine Resources Advisory Council of the state Department of Environmental Conservation.

DEC Commissioner Basil Seggos, noting a recent 2 percent expansion of the black sea bass quota that could have been a 15 percent reduction, acknowledged it’s “not enough. We need to put our fishermen at a competitive advantage relative to where they’ve been for almost 20 years.”

Asked if the state is still contemplating legal action against the federal government, he said, “To the extent we continue to get the same treatment from the feds that we have gotten in the past, we’re prepared to exercise all our options, including litigation.”

Cuomo acknowledged the complaint of some local fishing captains, who say it’s difficult to compete with states that have a larger fishing quota.

“To have distinctions between New Jersey, Connecticut, etc., you’re driving the charter market and the recreational market to other states, and I think that’s unfair to New York,” he said. “That’s why we’ve been fighting it. It’s been going on for years, [and] New York has been saying, ‘Enough is enough,’ we want fairness.”

For the six reefs being built this year, the state will send 33 barges of material recycled from the Tappan Zee Bridge and other material to fill the reefs around Long Island. The state will also scuttle 29 former canal vessels into the water.

Additional reefs are scheduled for this year in coastal waters off the Fire Island Lighthouse, Moriches, Hempstead Town, the Rockaways and Smithtown.

Six additional reefs will be constructed next year, Cuomo said.