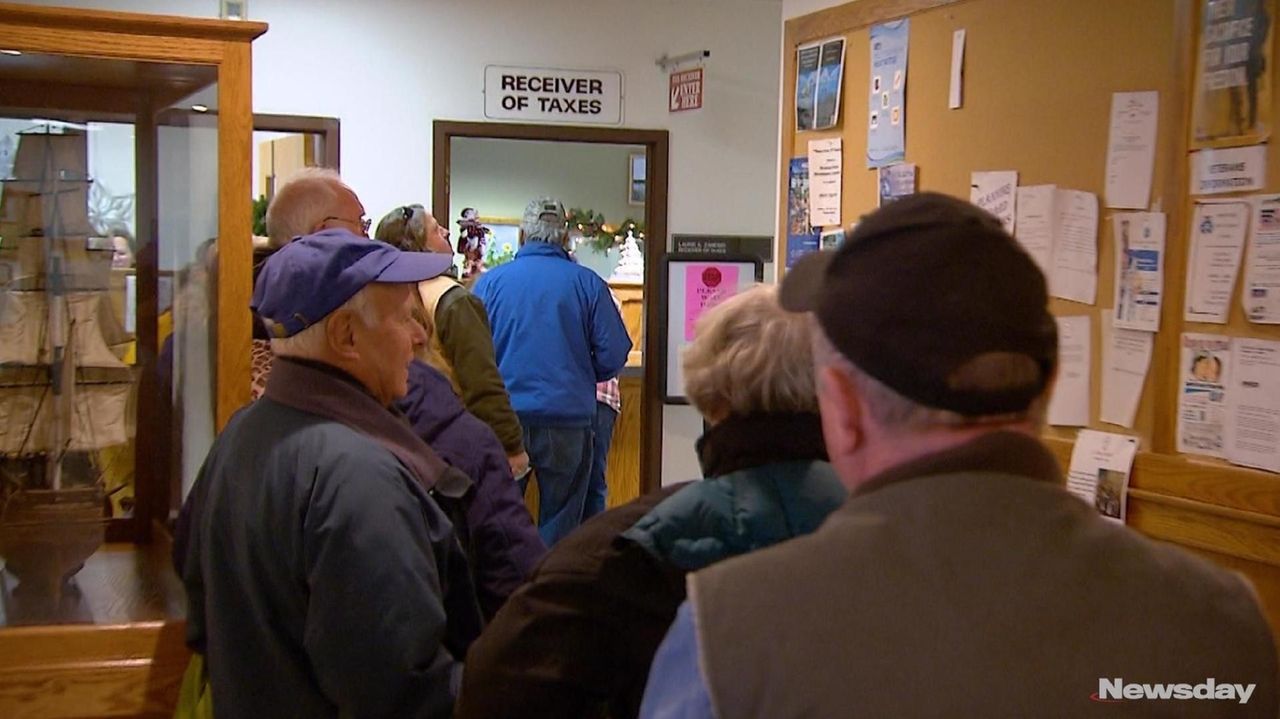 Tax receivers' offices on Wednesday continued to face lines of property owners out the door and phones ringing nonstop as Long Islanders rushed to pay taxes in the hopes of deducting the payments this year, before a federal cap on state and local tax deductions goes into effect next year. The Riverhead office spoke about the issue on Wednesday, Dec. 27, 2017. Credit: News 12 Long Island

As municipal workers leave Long Island town halls for the last time this year, the lights will stay on in one department — the town tax receiver’s office.

Several town tax receivers extended operating hours this weekend to help handle the flood of property owners looking to pay their 2018 tax bill before the end of the year, with some offices staying open all day on New Year’s Eve.

Tax receivers’ offices on Wednesday continued to face lines of property owners out the door and phones ringing nonstop as Long Islanders rushed to pay taxes in the hopes of deducting the payments this year, before a federal cap on state and local tax deductions goes into effect next year.

Read what the IRS says

Hours after President Donald Trump signed the $1.5 trillion federal tax bill into law last Friday, Gov. Andrew M. Cuomo issued an executive order allowing payment this month of all or partial 2018 taxes in towns and counties that usually do not allow it, including Nassau.

In Suffolk County, the first half of the tax bill is due on Jan. 10, although tax receivers have reported an increase in people paying their bills in full before Jan. 1, even though it remains unclear whether the IRS will allow the payments as deductions in 2017 tax returns.

Rep. Thomas Suozzi (D-Glen Cove) on Wednesday sent a letter to the IRS urging it to allow taxpayers to deduct their 2018 payments in 2017. The IRS on Wednesday said in an emailed statement that properties that are assessed and paid before Jan. 1 will likely be deductible. Anticipated taxes are not.

Suffolk County Executive Steve Bellone on Wednesday directed his staff to contact every town tax receiver’s office in the county to alert them that county clerical staff would be available to help them.

“These are extraordinary circumstances we are all dealing with as Long Islanders and we have to do everything that we can to assist our residents,” Bellone said in a statement Wednesday.

It was not clear how many towns took advantage of Bellone’s offer. Riverhead Town Tax Receiver Laurie Zaneski said her office, with three staffers and a part-time worker answering phones, could not physically accommodate another clerk.

“There’s no room for another person. It was very nice, I appreciate it,” she said of Bellone’s offer, “but I only have two terminals.”

Towns struggled to meet the demand for prepaying taxes.

The online tax payment function was unavailable on the Smithtown tax receiver’s website for most of Wednesday but had been restored by the evening. The line to pay taxes at Smithtown Town Hall started outside the back of the building and traveled down the hall to the front door with hundreds of people waiting about an hour to get into the office.

“If I’d known ahead of time, I’d have mailed” the tax payment, said Margaret Murphy, a bookkeeper from Commack. Mailed tax payments must be postmarked by Dec. 31 to be considered paid this year, officials have said.

Murphy noted the town employees are “probably doing their best.” The Smithtown tax receiver’s office will stay open an hour later than usual, until 5 p.m. Wednesday, Thursday and Friday, according to a message on the town website.

Hempstead Town Tax Receiver Don Clavin tweeted a letter stating that his office would no longer be able to answer individual emailed inquiries. The letter urged residents to visit LRV.Nassaucountyny.gov and click on 2018 General Taxes to determine the payment amount. His office is also offering extended hours and will stay open until 5 p.m. Saturday and Sunday.

No one answered the phone in the Huntington Town tax receiver’s office where lines snaked out to the street before the office opened in the morning. Shelter Island Tax Receiver Annmarie Seddio said she was too busy to speak, but that her office would not offer additional hours.

In Glen Cove, special Saturday hours have been added for early payment of city taxes and the second half of school taxes. The city does not yet have final county tax numbers, so those payments are not yet being accepted, Mayor-elect Timothy Tenke said. The Town of Oyster Bay has extended Friday hours at Town Hall East and will open on Saturday, when the office is usually closed.

North Hempstead officials said town workers from other departments would be temporarily transferred to the tax receiver office to deal with the extra volume and extended its hours throughout the week.

Smithtown: Open Thursday and Friday from 9 a.m. to 5 p.m.

The other towns in Suffolk County are not extending hours.

The City of Long Beach is not extending hours.

LIers cram receivers’ offices to prepay 2018 taxesPhones ringing off the hook. Residents lined up out the door. Questions shouted at staff ... Israel: Congress clueless about Long IslandThe Trump administration and the Republican majority have effectuated one of the largest transfers of wealth away from Nassau and Suffolk, and reshaped our economic terrain. Tax bill: Winners, losers on LI Read highlights from the GOP tax bill