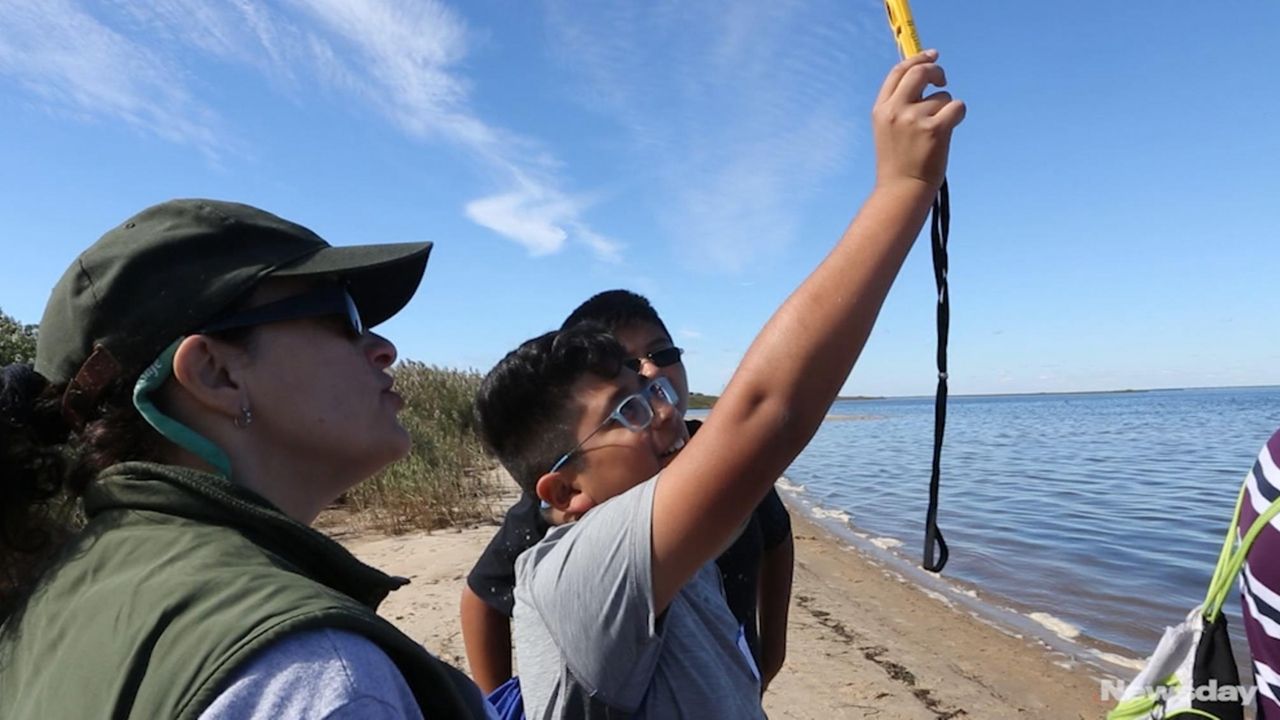 Longwood Junior High School students gathered scientific data about the aquatic ecosystem on Long Island as part of the Day in the Life program, which started seven years ago and has grown larger each year, adding more students, more schools and more locations to gather research.  Credit: Linda Rosier

Thousands of Long Island middle and high school students are spending part of their school days netting tiny fish and swishing water around in glass vials.

They’re participating in the Day in the Life program, which allows students to collect scientific data about the aquatic ecosystem in local waters. The program is jointly organized by the Central Pine Barrens Commission, Suffolk County Water Authority, Brookhaven National Laboratory and the New York State Department of Environmental Conservation. The program started seven years ago and has grown larger each year, adding more students, more schools and more locations to gather research.

Last year, for example, the program partnered with 47 schools and sent 2,400 students to nine rivers across Long Island to collect data. This year, there are 53 schools with more than 3,000 students collecting data from 11 rivers, including the Carmans River, Peconic Estuary and Mill River.

On a recent weekday, students from three schools arrived at Fire Island National Seashore and spread out to gather data.

About 30 students from Bay Shore High School were divided into groups to either test water quality, measure tides, examine sediment samples or conduct an inventory of organisms in the water.

Students said they liked the opportunity to get out of the classroom and get their hands dirty while discovering more about Long Island.

“You learn a lot more being out in the environment than in the classroom, especially in biology,” said Noah Bacon-Angevine, 16, a junior. “You’re exploring your backyard.”

Asia Gray-Edwards, 17, said the event was an opportunity to learn in a new way.

“It was very memorable,” said Gray-Edwards, a senior. “I was working with my friends and comparing what we were doing, and you got to understand what they were learning, too.”

Students said they were surprised to learn that fish swim so close to the shore of the bay — where they often swim — and that worms are buried underneath the sand.

Tenth-graders Caitlin Christie and Mariana Montoya, both 15, waded into the water with a net to capture fish, which were measured with rulers before being tossed back into the bay. Among the catch were anchovies, pipefish, jellyfish and a dead puffer fish, which students passed around with reactions that ranged from scientific interest to squeamishness.

Kami Horsley, a living environment teacher at Bay Shore High School, said she enjoyed seeing students more willing to take risks and reveal more of their personalities than they do in a classroom, noting one group dug through the sand for a crab they later named Eugene.

“It’s really rewarding as a teacher to get them in nature, see them work together and discover and be excited,” Horsley said. “To have them feel a sense of connection to nature is my ultimate goal, because how else will they care about the environment?”

After a short group walk near the beach vegetation, senior Carlos Espinal, 17, said seeing hundreds of Monarch butterflies — which stop at Fire Island along their annual migration route to Mexico — made him “feel hopeful.”

“They say we’re endangering and depleting the environment,” Espinal said. “It’s nice to see we still have some nature around here.”

In Shirley, a group of 40 students from Longwood Junior High School in Yaphank gathered at the Smith Point Wilderness Center to run tests along the Great South Bay shoreline.

Mel Morris, a special projects manager in the educational programs office at Brookhaven National Laboratory in Upton, huddled the students together and explained the day’s task.

“I want you to be serious about this today and take as accurate data as possible,” he said.

Morris told the students that their data would be compiled and posted on a special website that scientists may use to determine how Fire Island is changing over time in terms of climate, beach erosion and storms.

“Be careful with all your measurements,” he said.

Students were divided into four teams, with each group recording different types of data.

Nicole Acosta, 12, pulled about 50 Atlantic silversides out of the water, along with a tiny blue crab. Her socks were soaking wet, but she said she had fun using the net for the first time.

“I enjoy being with the wildlife and in the water,” she said as she stood on the shoreline. “I was a little skeptical at first, but I was very happy that I actually got some fish.”

As the students worked, Erin O’Connor, 21, of Coram watched from a distance. O’Connor was 18 and a student at Longwood High School when she participated in Day in the Life during its first year of existence, in 2011. She collected water samples for testing on the Carmans River. Now, the Stony Brook University graduate is back with the program, helping guide students through their research.

O’Connor said her environmental science classes in high school and the Day in the Life program played a large role in her decision to major in biology with an environmental concentration. Students from the Longwood school will benefit from the program too, O’Connor said.

“Even if they don’t go into environmental science, they’ll have an appreciation for nature,” she said. “Sometimes that just means they won’t litter as much.”