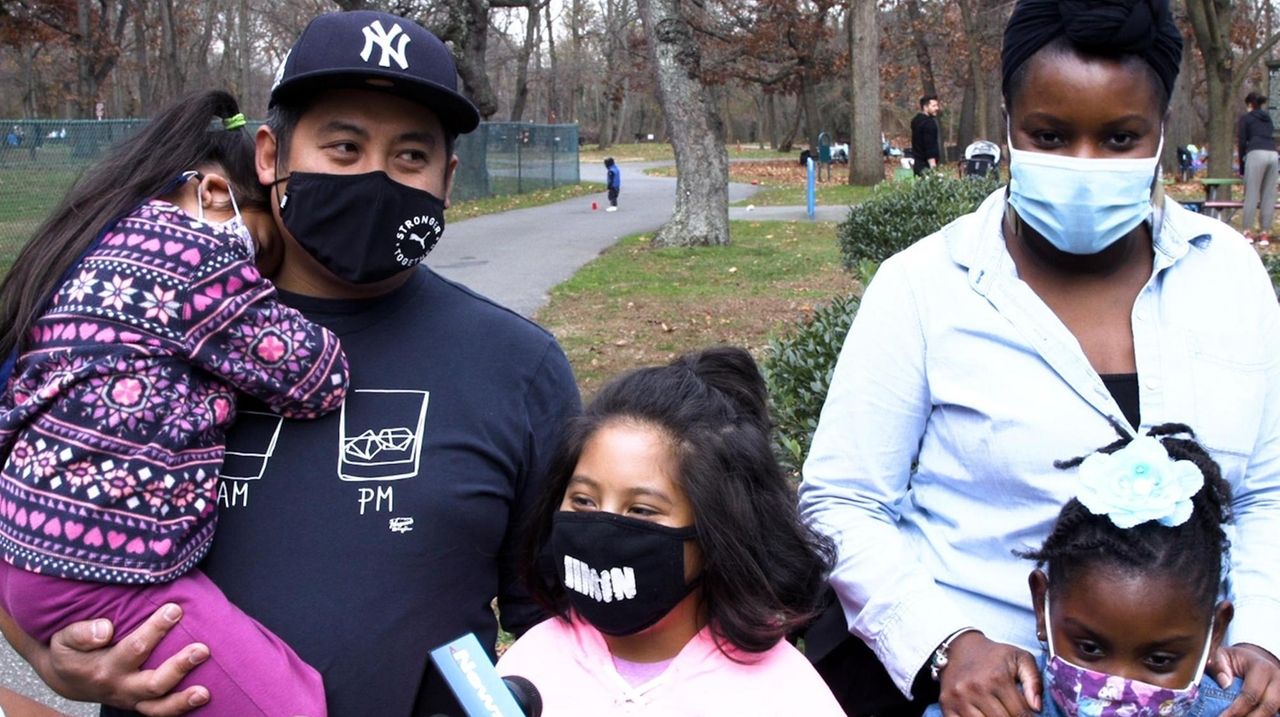 As the holiday season approaches, in a year where families will be celebrating differently, Long Islanders spoke to Newsday on Nov. 19 and Nov. 21 about what they are most thankful for. Here's Newsday's Faith Jessie with the report. Credit: Newsday staff

Long Islanders listed a bevy of reasons they’re grateful this Thanksgiving — ranging from sobriety, heroic front-line workers and newfound time with loved ones — all while the resurging pandemic is throwing family get-togethers into a tailspin.

The historic COVID-19 crisis and a bitterly contested presidential election are contributing to 2020's notoriety. Factor in this month’s decision by Gov. Andrew M. Cuomo meant to halt the spread of the virus by limiting gatherings at homes to 10, and many wouldn’t fault New Yorkers for believing the cranberry sauce in their holiday season had spoiled.

But Long Islanders who spoke to Newsday last week from Eisenhower Park in East Meadow, said in the spirit of Thanksgiving, they’re focusing on the positives in their lives.

"I’m grateful for my recovery," said Adriana Kijko, 33, of Wantagh, who said Thanksgiving 2020 to her boils down to one word: sobriety.

"In past Thanksgivings, I was using," she said. "Now I’m going to be present and actually remember who I talk to and build memories from it."

Wally Bishop, 58, of Westbury, said men and women in the military are the country’s traditional heroes. But, he said, others doing battle with the virus in different ways also deserve high praise for stepping up while the coronavirus ravages communities.

"How many people have sacrificed [while] working on the front lines?" Bishop said. He said essential workers also deserve credit for stocking shelves and bagging groceries, as well as doctors and nurses. "We should all be very thankful that we live in a country [where] people are dedicated to their professions," he said.

Angela Panillo, of Mineola, said: "I’m actually very grateful for my friends and family, that I’m able to pay my bills. And that I didn’t get the COVID. I got tested twice. And I feel very healthy. And I do a lot of walking and I love life... So, I’ve been really, really, blessed so far."

Taylor Stoessel, 30, of Levittown, said the past year for her entailed not only coping with the pandemic herself, but also taking additional precautions for her 1-year-old daughter, Madelyn. Stoessel's family has been dealing with her daughter's condition called ventricular septal defect, commonly known as VSD, in which there is a hole in a wall in the bottom chambers of the heart, she said.

Stoessel spoke from a playground at Eisenhower Park while a bundled Madelyn took wobbly steps in front of her mother. "We just had a checkup and they said she probably will never need surgery," Stoessel said. "It was like a miracle."

Stoessel said managing her youngest daughter’s medical condition while the pandemic began taking a deadly toll on Long Island initially meant she had to decide whether to take significant time off from her job as a pharmacist. Stoessel has been on leave for the past nine months, she said. Her decision meant a big pay cut. But it was ultimately the right one for her family.

"I just had this feeling, and I said, ‘this is my last day at work.’ And the next week, someone at my pharmacy got COVID," she said. "I would never forgive myself if I chose money over her health."

Anthony Cardenas, 30, of Long Beach, said the pandemic has given him more time with his mom. He’s grateful for the bond they created, he said.

"It’s given us a chance to reconnect like when I was little," Cardenas said. He added before the pandemic, he would see his mom in passing about once a week, but now he’s seeing her every day and she’s cooking for him regularly. He said he’s eagerly awaiting his mother’s holiday dishes and a "fridge full of Thanksgiving food for a month after."

Long Islanders who spoke to Newsday said their Thanksgivings will be much smaller in compliance with Cuomo’s restriction.

Because of the state mandate, Javier Aguilera, 20, of Hicksville, said he will celebrate with immediate family and also will connect with other loved ones via Zoom.

Thanksgiving for Aguilera means reflecting on those lost during the pandemic. He said he knows many people who have died from COVID-19.

"A lot of people in the hospitals, a lot of people are sick," he said. "I’m here. I’m healthy. And that’s what I’m thankful for."

Aguilera’s family hails from Nicaragua. He said he’s excited to blend the two cultures during his family’s celebration. Aguilera said he can’t wait to stuff himself full of gallo pinto, a traditional Nicaraguan dish made from rice and beans. His Thanksgiving, however, will also include American favorites.

"Turkey … We can’t not have it," Aguilera said.

Bishop, of Westbury, who spoke while wearing a mask bearing the American flag, is looking past Thanksgiving. He said he looks forward to putting a challenging year in the rear view.

But to do so as a country, Americans must set aside their political predilections, no matter who they voted for in the election, Bishop said.

Tell us what you are grateful for this year by following Newsday on Instagram @newsday and finishing the sentence to our photo "I’m grateful for…" Share your answer on your Instagram Story and tag us for a chance to be featured on our page.