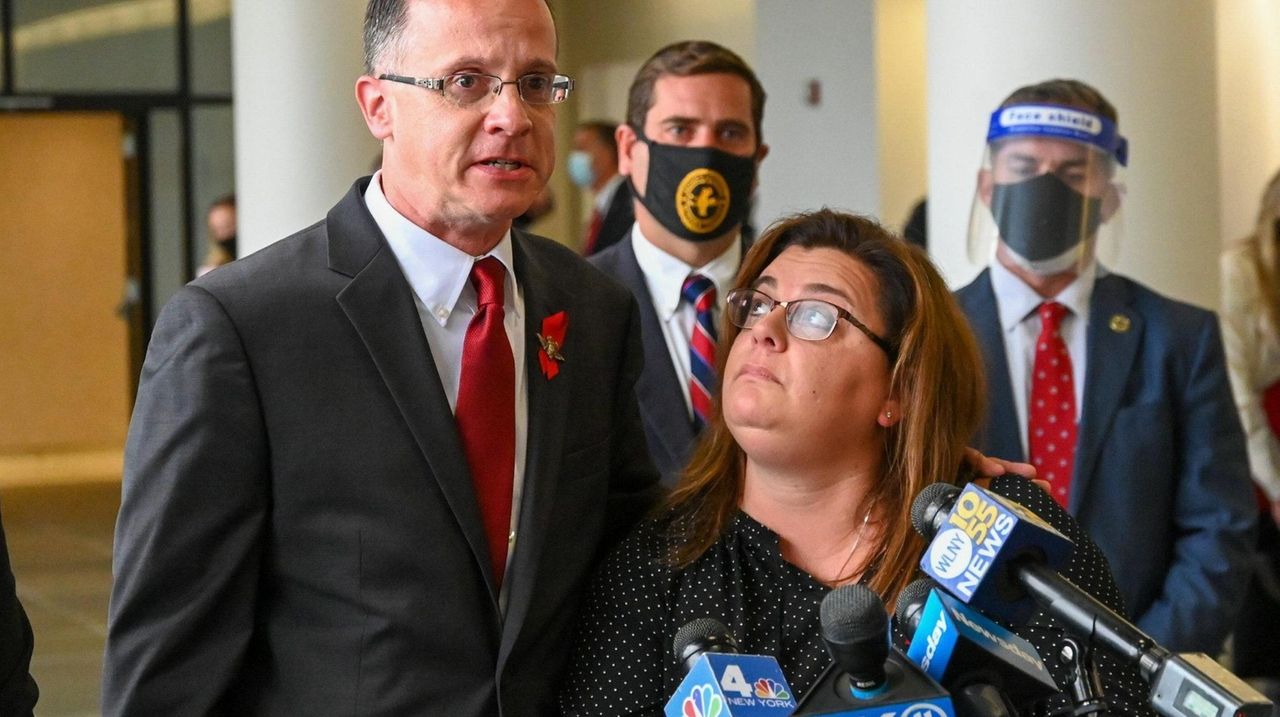 State Supreme Court Justice Fernando Camacho on Tuesday said he will decide Wednesday whether to vacate the 2019 guilty verdict of Thomas Murphy for driving drunk and crashing into a group of Boy Scouts in Manorville, killing 12-year-old Andrew McMorris, or immediately sentence him to prison. Credit: Howard Schnapp; Photo credit: McMorris family

A Riverhead judge will decide Wednesday whether to vacate the guilty verdict of a Holbrook man convicted of driving drunk into a group of Boy Scouts, killing a 12-year-old boy, or sentence him to prison, after a hearing on alleged jury misconduct concluded Tuesday.

State Supreme Court Justice Fernando Camacho will determine the fate of Thomas Murphy, 61, on the two-year anniversary of the Sept. 30, 2018, crash on David Terry Road in Manorville that killed seventh-grader Andrew McMorris, of Wading River, and injured three Scouts from Troop 161.

Camacho's ruling will come after a hearing in which an alternate juror in the 2019 trial testified that he witnessed jurors regularly discussing the case before the start of deliberations — in violation of Camacho's orders.

"It was an awful display of unfairness by that jury," Politi said. "This is about fairness and my client did not get a fair trial."

"The record confirms that the process and verdict was just and fair," he said.

Earlier this month, 12 deliberating jurors and five alternates were called one by one into the Riverhead courtroom as subpoenaed witnesses to testify about their actions — and those of other jurors.

A few said they heard jurors commenting about witness testimony or about the contentious courtroom relationship between Camacho and Politi. But others testified they heard no such discussions. No juror admitted any improper conduct.

On Tuesday, alternate juror No. 5, a former Marine who was prevented from testifying on Sept. 16 because of COVID-19 restrictions, recalled hearing juror No. 2, before deliberations began, disagree with the conclusions of Jimmie Valentine, a defense expert in forensic toxicology.

"He said [Valentine] 'didn't know what he's talking about. That's not how it works,' " the alternate juror said of No. 2, who has a background in science.

Another juror privately called Politi a crass expletive, the alternate said, and others openly discussed the honesty of the Boy Scouts who testified about the crash.

Juror No. 2, who has denied the allegations, wrote a pair of notes to Camacho during the trial asking to question Valentine and to educate other jurors about scientific issues. Camacho rejected both requests.

But Politi called that juror "an unsworn witness" against the defense who helped sway the panel to convict Murphy.

Nonetheless, Politi said he expects Camacho — who he has repeatedly accused of unfair treatment and bias — to reject his argument and send his client to prison.

"The writing is on the wall," Politi said.

In his summation Tuesday, Politi said all but the two jurors who substantiated his claims lied to ensure Murphy's guilty verdict was not reversed. During the trial, Politi accused Suffolk police officers, the Medical Examiner's Office, prosecutors, scouts and their parents all of dishonesty or improper conduct to convict his client.

Prosecutors contend that Murphy spent hours before the crash drinking vodka at the Swan Lake Golf Club in Manorville before getting behind the wheel of his Mercedes SUV. Roughly a mile from the golf course, Murphy crossed a white fog line and crashed into the Scouts, who were on a 20-mile hike, prosecutors said. Politi contends that the boys were "poorly supervised" and wandered into the roadway.

John and Alisa McMorris, Andrew's parents, said they hope Wednesday's anniversary — and the prospect of Murphy's sentencing — will allow their family to begin healing.

"We haven't healed in two years," said a visibly shaken John McMorris. "How could we heal through all of this nightmare? But we stand strong and will continue to persevere and honor our son and do good things in his name."