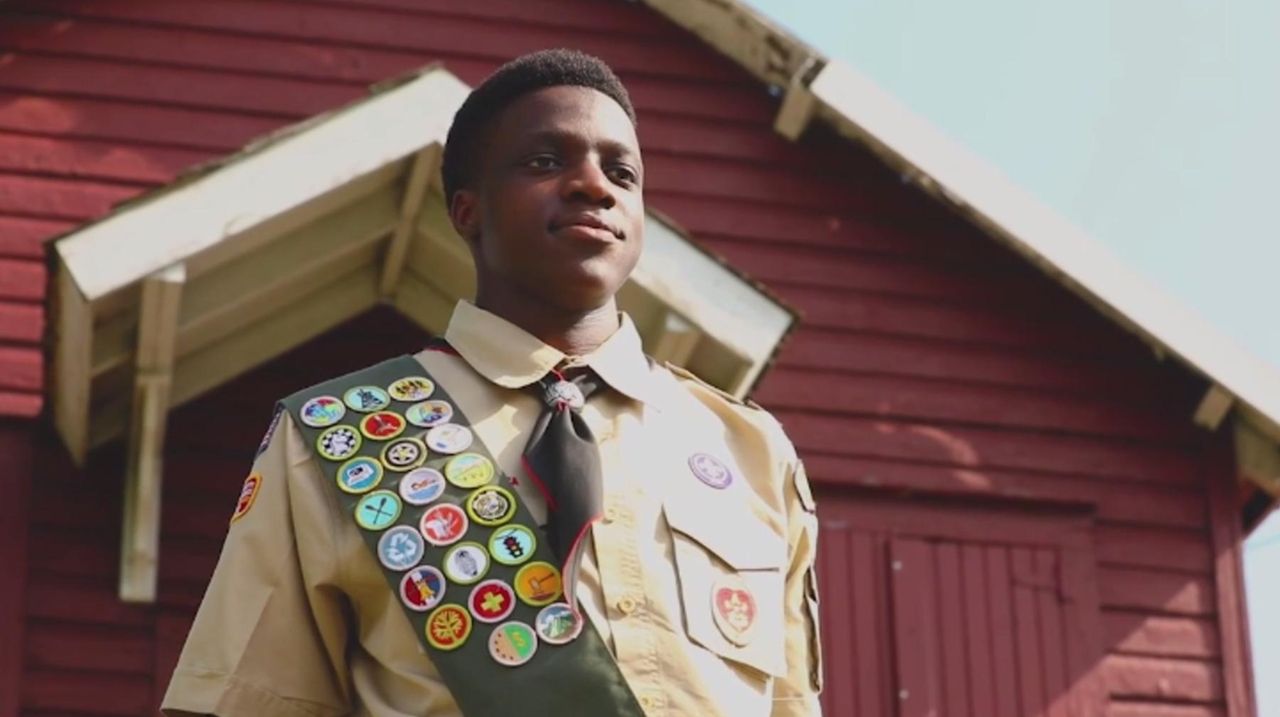 In an effort to earn his Eagle Scout badge, 17-year-old Boy Scout Denzel Honore is working to name an old, rundown schoolhouse in Hempstead as a landmark. On Tuesday, July 18, 2017, in front of the schoolhouse he wants to save, Honore talked about why he feels it's a worthy cause.  Credit: Newsday / Marcus Villagran

Denzel Honore thought about building benches in Hempstead’s Kennedy Park to earn his Eagle Scout badge until a local legislator put an old red schoolhouse with a potbelly stove on his radar. Once he saw the structure in Hempstead, he decided to try to make it a historical landmark.

Honore, who belongs to Troop 300, based in Hempstead, said town Councilwoman Dorothy L. Goosby talked about a decrepit schoolhouse in need of repair during an Eagle Scout ceremony earlier this year at St. George’s Episcopal Church on Front Street. She is a longtime resident and said that from the time she was a young girl people have told her the structure was Hempstead’s first schoolhouse.

After hearing Goosby’s presentation, Honore, 17, who has been in the Scouts since he was 9 years old, decided to pursue the project. Eagle Scout is the highest rank in the Boy Scouts and is earned by completing a major project that highlights leadership skills before the age of 18.

“It’s an exciting project for an Eagle Scout, and I applaud the effort,” said Hempstead Mayor Don Ryan. “I think historical value adds to a community.”

Honore had planned to just refurbish the one-story building, which was originally white and sits near the Alverta B. Gray Schultz Middle School. But he was advised by the local Landmarks Preservation Commission that it first had to be designated an official historical landmark.

Honore, a senior at Kellenberg Memorial High School in Uniondale, also needed to know that it was indeed a former schoolhouse. He admits he thought the wood-frame structure was a shack the first time he saw it, based on how small it was.

“We didn’t really know it was a schoolhouse until we started getting into the project,” he said.

Douglas Wilke, who has been an architect and engineer since 1959 and is a member of the preservation commission, conducted an independent inspection of the schoolhouse for Honore to help him with his Eagle Scout efforts and estimated that it was no bigger than 24 by 14 feet.

“It probably fit about 12 students comfortably and had all ages,” Wilke said.

When Wilke inspected it, he said he found a potbelly stove that probably was used to heat the tiny schoolhouse.

The process of historical designation required Honore to dig both figuratively and literally. He found a container buried near the schoolhouse, and inside was an ax, an iron, an old school bell and photographs of an American Indian chief and Benjamin Harrison, the 23rd president, who served from 1889 to 1893.

He got help with the research from Joysetta Pearse, a historian and the executive director of the African American Museum in Hempstead. She put him in touch with Patrick Mazza, a retired police officer and creator of the Historical Hempstead NY and Surrounding Areas Facebook group. Mazza has been collecting memorabilia for years and was able to uncover a Newsday clipping from July 1966 with a photo of the schoolhouse.

To secure the landmark designation, the building’s historical value has to be proved, said Honore’s mother, podiatrist Diann Anthony. The work began in April, when Honore started visiting various local libraries and museums to get the full background of the little red schoolhouse.

After gathering all the information he could find, Honore sent out letters to the Hempstead School District, the Landmarks Preservation Commission and the village and town boards. The process was more than he expected.

“I didn’t get any gray hairs and it wasn’t brain numbing, but it was close,” he said jokingly as he sat on a couch in his home with a binder containing documents and information. “We had to go through a lot of digging, a lot of picture taking. It was tough.”

His mother agrees with that.

“I thought it was just going to be a drive to Home Depot to get nails and tools, until we found out that there was so much more to it, and we were advised to get it landmarked,” she said.

Several emails were exchanged and phone calls were made, but Anthony said the process was made easier with help. Much of it has come from Wilke, who was able to date the schoolhouse to the early 1820s. He said he based that on the schoolhouse’s old nails and the hand-hewn timbers, which were commonly used in the early 1800s.

Once Honore had a date, he had a starting point for his research and could now search for documents around or after that time period. The Newsday clipping Mazza found included a caption that referenced George Durkes Clark, a lawyer. The caption said Clark had donated the schoolhouse to the Hempstead school district in March 1966 and that the school planned to convert the building into a museum. No one knows who built the schoolhouse or who owned it before Clark.

Honore is getting a lesson in history as part of his efforts, but he actually wants to be a veterinarian. He plans to major in biology in college and is considering Cornell University, Pace University, the University of Maryland and Clemson University in South Carolina.

He said that when he joined the Scouts he didn’t think it was for him, but he said that changed after he attended a meeting with a friend. “By the second or third meeting, we became boys,” said Honore.

In his free time, Honore, who is an only child, likes to play basketball and is also a member of the Kellenberg track and football teams.

He was born in Hempstead after his mother and father, Fritznel Honore, relocated from Queens. Anthony said she was drawn to the village, the largest in New York State, in part by the old churches on Peninsula Boulevard, one of the community’s main thoroughfares and the street the schoolhouse is on.

Mazza is well-versed in Hempstead’s history, and his curiosity about the origins of the little red schoolhouse led to the discovery of a Long Island Daily Press article from August 1966. The story was accompanied by a picture of the schoolhouse with a caption stating that the building’s restoration was complete and that officials were ready to accept “authentic articles,” such as books, desks and benches to furnish it.

A Newsday photo 27 years later of the schoolhouse mentions former Hempstead principal Marguerite Rhodes, who worked at Marguerite Golden Rhodes Elementary School, which was renamed after her and is now closed. She is credited with restoring the schoolhouse on the town’s 350-year anniversary.

Honore’s project also has been a learning experience for Pearse, who found out more about Clark, including that he lived in Hempstead on Fulton Avenue.

“Hempstead is struggling along, trying to come back as the hub of Long Island, and I think something like this will help,” Pearse said of Honore’s Eagle Scout project. “It’s nice to see a young man interested in history. I think it’s going to be a plus for everyone involved.”

After gathering all the required documents, Honore presented them to the Landmarks Preservation Commission. The commission could approve the landmark designation when it reconvenes in September on the condition that its members get approval from the town board and there are no objections from the school district or village board of trustees. Honore plans to meet with the board of education in August.

If the schoolhouse is granted landmark status, Honore plans to redirect his energy to his original plan to refurbish the structure. He said he hopes to find restoration companies that can make the schoolhouse functional again and would like to see it incorporated into Hempstead’s curriculum by highlighting what school was like in the past.

“I think everybody should be a great citizen of their town,” Honore said. “If you see something worn down, you should get the town to write a petition or start your own nonprofit. You have to save the little pieces of joy that you have in your town.”

From lowly to landmark

Age does not automatically confer a structure with historical status. When considering the designation, the Town of Hempstead’s Landmark’s Preservation Commission looks for: