Michael Pitsinos, owner of restaurant NAIA Hamptons, is excited to have the summer around the corner and his Capri Hotel booked throughout. South Fork business owners are banking on a return to somewhat normalcy this summer, with some predicting their busiest season ever. Credit: Gordon Grant

Bar curfews are over, people can show off their maskless faces on the street and the Hampton Classic will be back on.

With nearly 70% of Long Islanders receiving at least one COVID-19 vaccine dose — the highest percentage in the state — and New York’s positivity rate well below 1%, South Fork business owners and event organizers are banking on a return to something resembling normalcy this summer.

Some are predicting 2021 will be their busiest season ever as party-starved Hamptonites seek to fill their social calendars and tourists flock to the East End.

"I think there’s a kind of fervor to get out and to connect," said Andrea Grover, executive director of East Hampton’s Guild Hall, which celebrates its 90th anniversary this year. "I mean, we are social animals. We need to be together and we need to experience art together."

The organization will host performances in its backyard theater, which at 100 seats is smaller than the 360-seat John Drew Theater but is still double last year’s capacity. Guild Hall will reopen the indoor theater in August.

Southampton Town Supervisor Jay Schneiderman said event permits filed in the town still need approval from the state following a July concert featuring The Chainsmokers that drew the ire of Gov. Andrew M. Cuomo. The governor said the event violated state COVID-19 protocols by allowing a section of fans to congregate where mask-wearing was not enforced. The town has asked the state to lift that requirement in anticipation of the busy season.

"My sense is that it’s going to be gangbusters," Schneiderman said. "People are really anxious to be out. They are feeling like the pandemic is, for the most part, behind them and they need to celebrate." 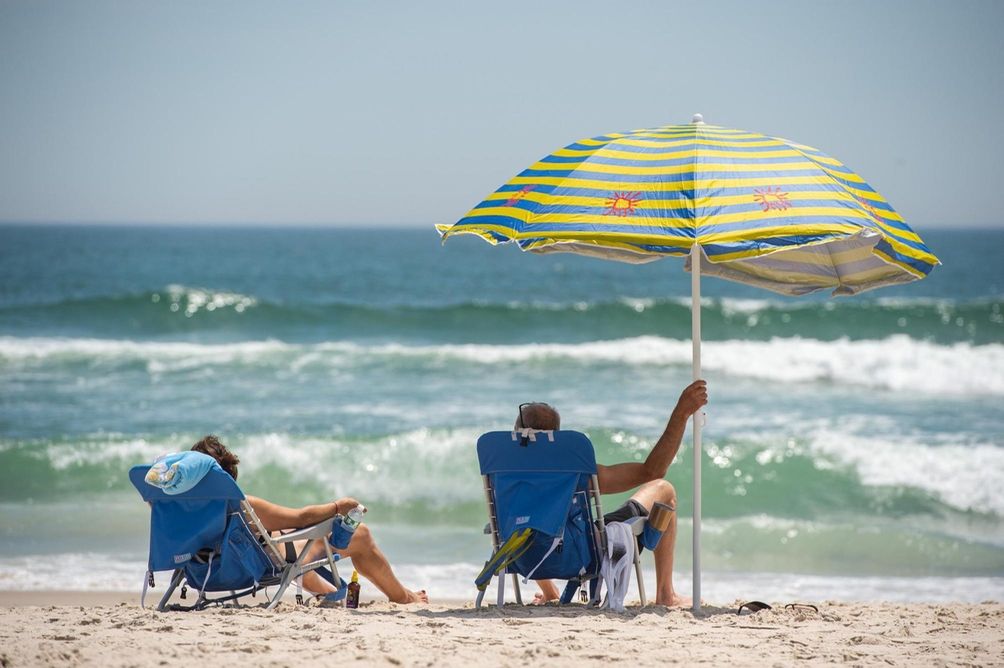 It will be much easier for out-of-towners to hit the South Fork beaches this summer than last.

Southampton Town will once again sell $30 day passes on the weekends at the popular Ponquogue Beach in Hampton Bays, Tiana Beach in East Quogue and Foster Memorial Beach in Sag Harbor. The town will open the beaches up to 100% capacity but reserves the right to restrict access if 6-feet social distancing can’t be maintained, said parks director Kristen Doulos.

East Hampton Town is offering $50 day passes only at its Kirk Park Beach in Montauk. The passes will be available on weekends through June 19 and seven days a week after that.

Suffolk County will allow non-county residents to visit its beaches after prohibiting them in 2020. New for this year is a program that will allow some residents to store their canoes and kayaks at certain parks with a permit, including at Indian Island in Riverhead and Smith Point in Shirley.

When it comes to the certainties of life, Hamptons traffic could be right up there with death and taxes.

While not much has changed by way of South Fork roadways, visitors can expect bus and rail schedules to run more frequently this season than in 2020.

"We expect 2021 to be a very busy summer, and we are ready to provide the service and safety our passengers are accustomed to," Withrow said.

Passengers are still expected to wear masks while aboard buses and trains, as the federal Transportation Security Administration has required them for public transit at least through Sept. 13.

The Long Island Rail Road will be mostly back to normal this summer, with additional service to Montauk and Greenport and the weekly Cannonball Hamptons Express train to Montauk up and running as of May 28. Off-peak fares remain in effect on all trains, including during traditional peak travel until further notice, according to the Metropolitan Transportation Authority.

"The LIRR is safer and cleaner than ever — and we’re proud to serve all our communities across Long Island as we support the great New York comeback for local businesses, restaurants and downtowns," LIRR president Phillip Eng said in a statement.

Late nights are back and patrons can once again show their faces from the centerpiece bar of 75 Main in the heart of Southampton Village. Owner Zach Erdem said he expects to do double the business this summer with people itching to resume their social lives.

"Why do you go to a restaurant when you can get food from a supermarket? People want to go and be seen," Erdem said.

Erdem, who apologized last year after his restaurant lost its liquor license for COVID-19-related violations, said his establishments would abide by all guidelines in 2021. He said he is opening a lounge outside his Blu Mar Hamptons restaurant, also in Southampton, where proof of vaccination is required for entry (Erdem said he is requiring that from his staff as well).

Upscale restaurants pivoted to takeout business last year, and while that option will remain, more people are looking to dine in this year, said Carol Covell, general manager of the 1770 House & Inn in East Hampton. She said she expects demand for outdoor dining to stay strong as people gradually return to restaurants but might still feel skittish about being indoors.

"Still not a day goes by that somebody doesn’t say it’s their first time dining out," Covell said.

Some municipalities allowed restaurants to offer additional outdoor seating in public rights-of-way last year and noticed it was a hit. East Hampton Village in April codified a law allowing restaurants to use public space to create outdoor cafes.

Michael Pitsinos, managing operator of the Capri Hotel in Southampton, said it will continue to limit crowds at its poolside The Bathing Club because he learned during the pandemic that it improved the ambience.

"It really did not affect the bottom line," he said of the capacity limits. "On the contrary … the guest experience was enhanced as a result."

Pitsinos said his staff have all been vaccinated.

While businesses that cater to the party crowd are predicting big numbers, some mom-and-pop shops — especially those with less-visible locations away from downtown main streets — are still struggling to recover.

"Everyone is buying online. It is more convenient, so who can blame them," Martorelli wrote in an email. "Because of that, I don’t feel like we are going to see a big boom in sales, even after restrictions are lifted."

She said the business did not qualify for PPP loans and so she relied on gift card sales and customer donations to stay afloat.

The Hamptons marquee events and charity galas were canceled or held virtually last year, but expect the lawn parties to return in 2021.

The Hampton Classic, canceled in 2020 for the first time in 45 years, is back on this August. So is the Artists & Writers Charity Softball Game.

"We are very, very excited that we will be back," said Hampton Classic spokesman Marty Bauman. "And it’s still not 100% clear exactly how we will be back, but it’s looking more and more like it will be normal."

East End nonprofits often raise a large chunk of their annual budgets through summer galas, but last year they turned to direct contributions and virtual events.

Steve Long, president of Children’s Museum of the East End, in Bridgehampton, said the nonprofit museum and food pantry will again ask for direct donations but is looking forward to hosting events. A tennis fundraiser quickly sold out, a testament, Long said, to how hungry people are to get out and get involved.

"Here on the East End I think it’s going to be a really busy, active summer," Long said. "All of our classes and kids’ programs have sold out earlier than ever before. In general, people are so eager to reconnect with their friends, family and neighbors."

Some LIPA employees file claims of harassment, bullying
These restaurants, employers, colleges and NYC theaters will be requiring COVID-19 vaccines
0:58
Dog treat 'bone guy' mystery solved
5:41
Two turntables and a microphone made Biz Markie a legend
Curran bill would provide $375 payments to Nassau residents
Nassau bill would let cops seek damages from protesters
Didn’t find what you were looking for?