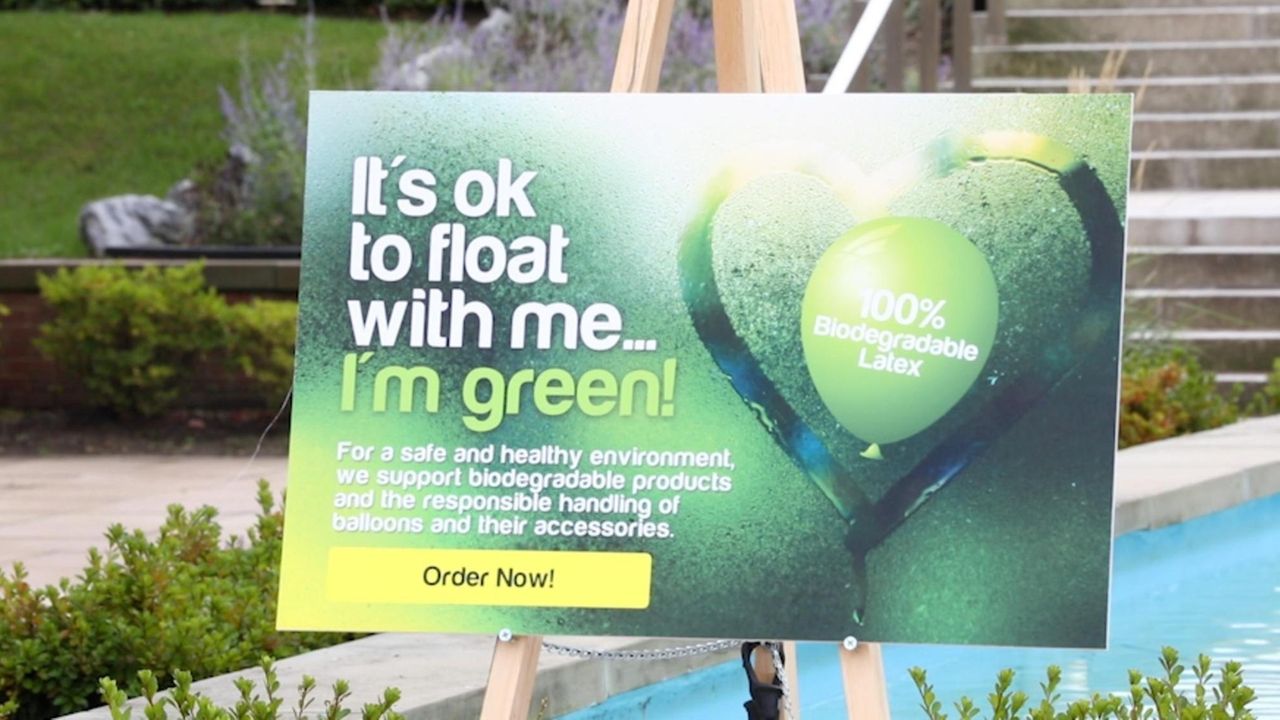 The Town of Hemsptead is the latest Long Island municipality to propose banning the intentional release of helium balloons. The bill, introduced on Monday by Town Supervisor Laura Gillen, argues that balloons have a devastating effect on the region's marine life.  Credit: Newsday / Chris Ware

It's a tradition that has spanned generations.

At weddings, fundraisers, openings and other ceremonies, dozens of latex and Mylar balloons are released to mark the event.

But the balloons that rise skyward eventually come down and often land near Long Island's waterways, littering beaches, polluting oceans and entangling wildlife, according to area environmental activists.

On Monday, the Town of Hempstead became the latest Long Island municipality to propose banning the intentional release of helium-filled balloons.

"The bottom line is balloons don't go to heaven but they sure send wildlife there prematurely," said Adrienne Esposito, executive director of the Citizens Campaign for the Environment, a Farmingdale-based advocacy group, at a news conference in Hempstead.

Supporters of the bill, introduced by town Supervisor Laura Gillen, a first-term Democrat, argue that balloons are having a devastating effect on the region's marine life. Whales, dolphins, seals, birds and turtles can mistakenly feed on the plastic, causing them to choke, or become trapped in the ribbon, activists said.

The Ocean Conservancy, a Washington, D.C.-based nonprofit, lists latex and Mylar balloons as the most common form of floating garbage within 200 miles of American shorelines.

"We live on an island and the Town of Hempstead is a coastal community and the majority of the balloons that are released end up in our surface waters and our beaches," said Gillen, adding that the debris also litters beaches and can cause outages when entangled in power lines.

Scott Bochner, a member of Operation Splash, a Freeport-based volunteer group that cleans and maintains South Shore marshes, said they rescue many animals caught up in balloons or who are dying from ingesting the items.

"This is nothing more than a culture change," Bochner said. "We are not asking anybody to stop celebrating. We are saying 'pop the balloons.' That would be a good way to celebrate. But don't let them go into the air."

Hempstead, the nation's largest township, would join Suffolk County, Long Beach and East Hampton, which passed similar bills this year. Violators in Hempstead could face up to a fine of $500 and 15 days in jail for each violation.

Children that accidentally let go of a balloon would be exempt, as would weather balloons, hot air balloons, balloons released indoors and balloons used for scientific experiments.

The bill, Gillen said, was sparked after Camp Anchor, a Lido Beach special-needs camp operated by the town, came under fire for releasing 250 balloons in August as part of an end-of-summer celebration.

A photo of the event, in which Gillen was included, received harsh criticism on social media from residents and activists who argued the balloon release was irresponsible.

Gillen Monday also attacked the "deceptive marketing" by some manufacturers that balloons can be environmentally friendly.

She noted that many balloons marketed as biodegradable will nevertheless take years to decompose — "long enough to wreak havoc on the wildlife that ingests them on the South Shore of Long Island."

Esposito said for balloons to be safe they must degrade in a reasonable amount of time into natural environmental elements. But "green" balloons, she said, degrade into smaller pieces of plastic over the span of several years.

"We need to really fix this problem," said Esposito, who encouraged other towns nationwide to pass similar measures. "It's one small step forward that will have a big meaning for our wildlife."

Town events that previously included the release of balloons will now instead use bubbles, Gillen said.

The town will hold a public hearing on the measure on Oct. 2.