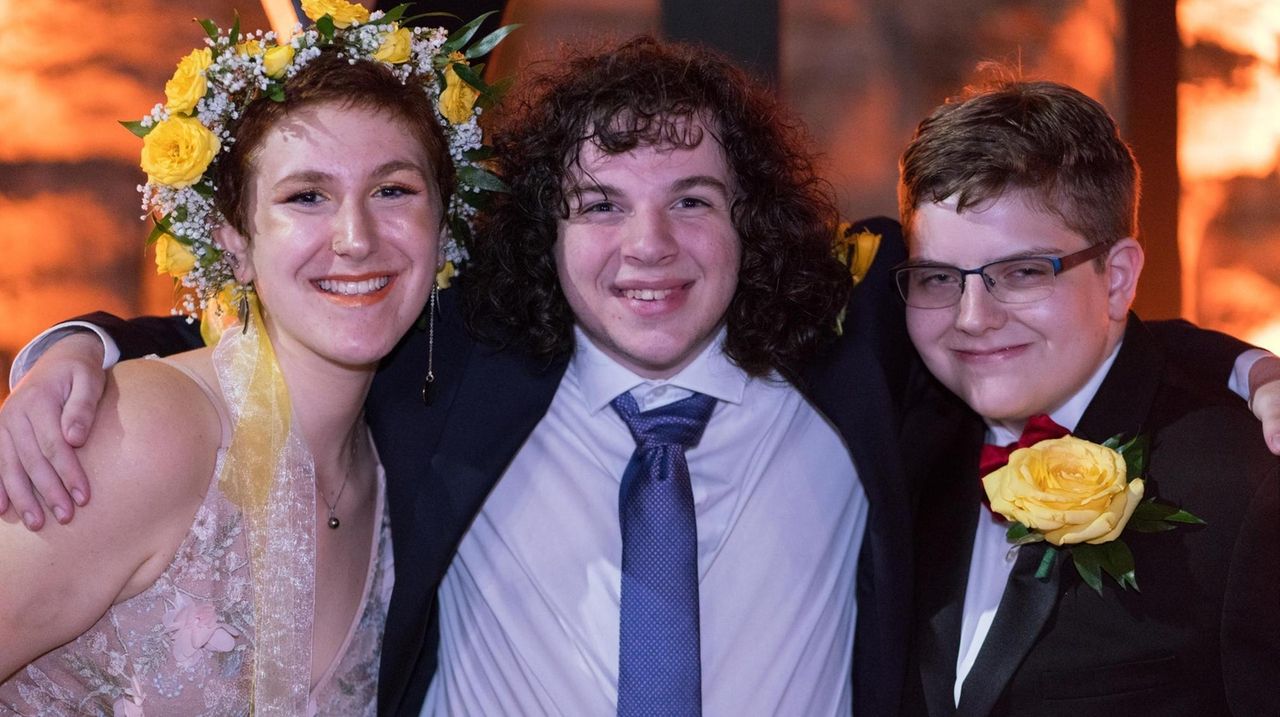 After becoming best friends in kindergarten, Jay Peierls, Luke Jeffrey and Eric Vonroeschlab proudly walked arm in arm (in arm) down the red carpet as they entered their senior prom in Sands Point on June 22.

The trio, who bonded over "Star Wars," Mario Kart and Paul McCartney, may not have been in every class with one another, but have always stayed close throughout the years.

“We were all kind of nerdy,” said Peierls. “And we just kind of hung out in our kindergarten class together and we never separated. I’ve known them pretty much most of my life that I can remember, and they've been around for everything important in my life, which is kind of incredible.”

Several years ago, Peierls and Vonroeschlab helped to get a gender-neutral bathroom installed at their school, Paul D. Schreiber High School in Port Washington. Both were co-presidents of the school’s Gay/Straight Alliance Club at the time.

“Eric and Jay both fought hard against some pushback to get that bathroom installed, and their gender and sexuality advocacy is definitely one of the most important and admirable parts of their high school experiences,” said Jeffrey.

The experience was also crucial in strengthening their friendship, according to Vonroeschlab.

“We've all had a rough time in high school, like I assume everyone does, and us having each other there as pillars has always been a huge comfort,” he said.

Jeffrey and Vonroeschlab have lived across the street from each other in Port Washington since they were children, and Peierls lives a mile down the road. And even if they don’t see one another every day, they make sure to talk at least once a week, Jeffrey said.

“We know what the others are going through because we keep open lines of communication with each other, so we know what helps and what doesn't,” said Vonroeschlab. “We've had our spats and squabbles, but we always come back together, no matter the situation.”

Peierls, who graduated early last year after taking additional classes, even made sure to come back for the best friends’ prom this year at Hempstead House in Sands Point, wearing a yellow flower crown to match Vonroeschlab's boutonniere.

“I absolutely hope that everyone has a person like these people in their lives because it’s just so nice and comforting to know there is someone you can always go to,” said Vonroeschlab. “And even if they aren’t available there’s another person there to back them up.”

Even though their relationship is as strong as ever, the friends will have to deal with a new challenge in September: going to separate colleges. Jeffrey is planning to study creative writing at SUNY Purchase, while Peierls will study music at Adelphi University. Vonroeschlab plans to study psychology at SUNY Cortland.

“The greatest part is knowing it's not actually the final chapter, that we’re still going to be friends for years to come,” said Vonroeschlab.