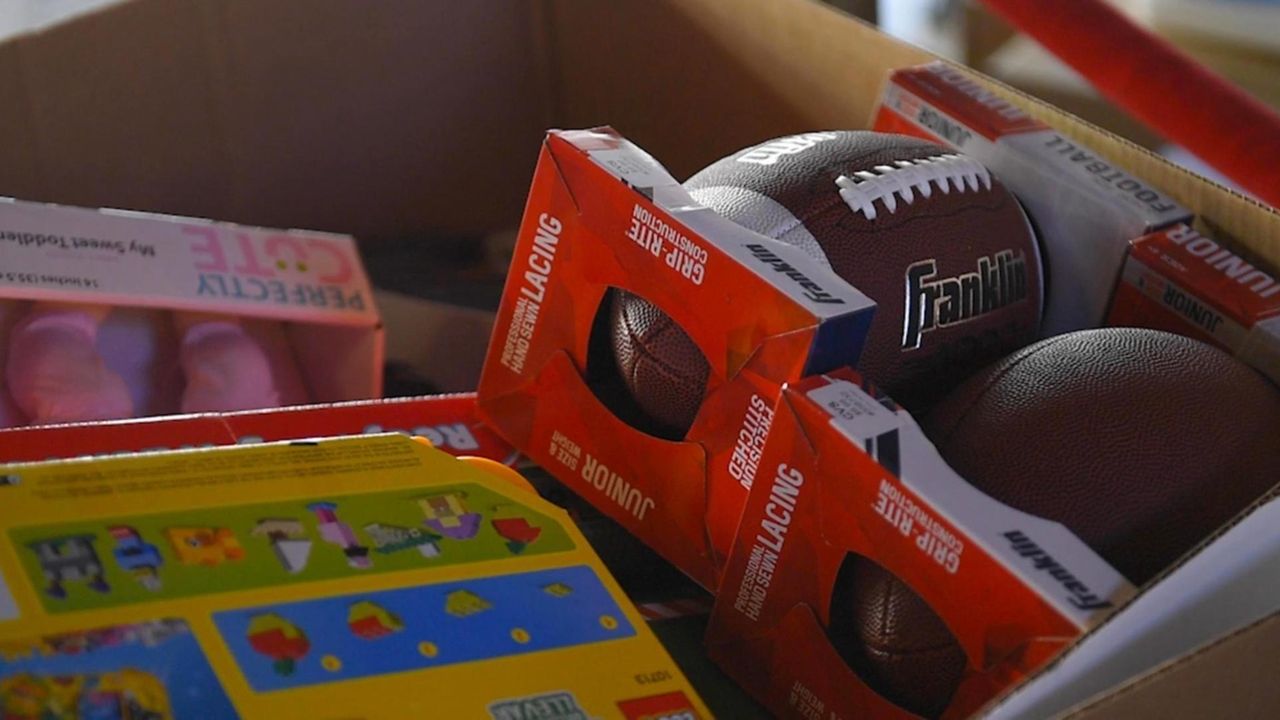 The Marines, on Wednesday, announced a kick-off to its first summer extension of their annual Toys for Tots program after an "expected increased demand" from Long Island kids because of pandemic-related hardships. Credit: Johnny Milano

A new initiative by Toys for Tots, in conjunction with Nassau and Suffolk business leaders and chambers of commerce, hopes to provide year-round smiles for children affected by the COVID-19 pandemic by turning the holiday season tradition into a yearlong event.

The announcement of a first-time summer extension to the annual collection program — and a new toy closet, where kids in need can get a toy all-year-round — was made by the U.S. Marines, who run Toys for Tots, as well as local officials at the Paramount in Huntington on Wednesday.

An anticipated flurry of snow to evoke the holiday season failed to materialize due to a broken snowmaking machine. It was the only broken promise of the morning.

Working with legislators, the Nassau and Suffolk chamber alliances and local business leaders, the new program will establish year-round collection locations across Long Island as well as toy closet locations where children, after calling a designated hotline number, can go to pick out a toy, book or game throughout the year.

The new initiative also institutes a post-holidays regifting program where families who might have more can pass on received gifts to those in need.

Fonti said the hope of kicking off the year-round initiative is "not just of toys, but smiles. Smiles all year-round," he said. "That's the goal."

As U.S. Marine veteran Maj. Chuck Kilbride, who's been instrumental in running Long Island Toys for Tots for 30 years, said: "The most important thing, I think, is the idea of getting the communities, Main Street USA mom-and-pop stores together and put a poster, put a box, in their store to collect toys and put a smile on a child's face by creating hope."

Kilbride said the organization was most-grateful for all the boots on the ground — police, firefighters, local officials, volunteers — who make it work.

Lt. Gov. Kathy Hochul sent a video statement expressing gratitude to Toys for Tots and local officials for helping bring smiles to children who've "had their entire lives turned upside down" due to the pandemic. Suffolk County Executive Steve Bellone expressed his gratitude in person and Nassau County Executive Laura Curran did so with a video message. Police, fire, local politicians and chamber of commerce officials all helped launch the kickoff campaign announcement.

In 2020, Toys for Tots, the largest holiday gift collection program in America, served more than 800 communities in all 50 states, as well as in the District of Columbia, Puerto Rico, the U.S. Virgin Islands and Guam.

All told, Toys for Tots distributed more than 20 million toys, books and games to 7.3 million less fortunate children in 2020, including 233,250 toys to 112,831 children in Nassau and Suffolk, according to the official Toys for Tots website.