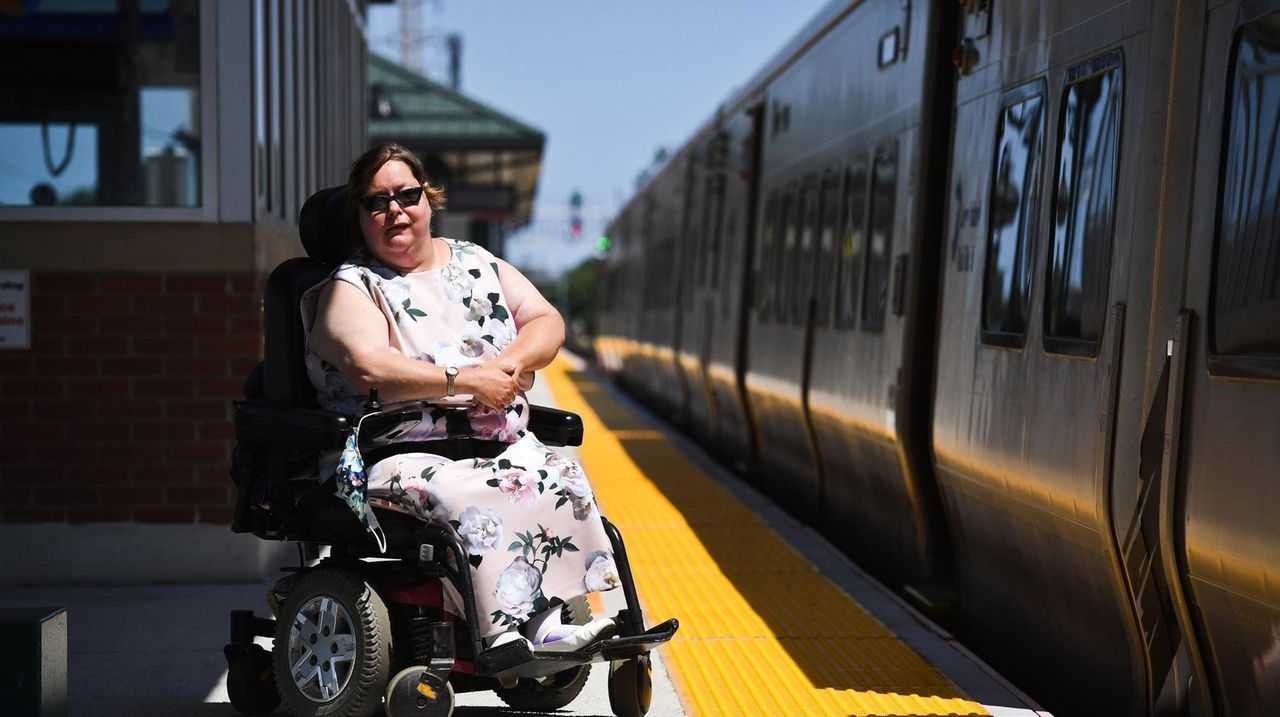 Gina Barbara, a wheelchair user, LIRR rider and disabled rights advocate, is confident the railroad will be obligated to comply with court-ordered upgrades. Credit: Steve Pfost

The fiscal crisis facing the MTA because of the coronavirus pandemic is threatening to set back several planned accessibility upgrades for disabled riders, including improvements on the LIRR, transportation officials and advocates said.

With a looming budget deficit that could total $16.2 billion by 2024, Metropolitan Transportation Authority officials have said all options are on the table to reduce costs. That includes deferment of much of the agency’s $55 billion Capital Program, which was to fund infrastructure in the transit system though 2024.

The MTA, responding to years of pressure from disability rights advocates, included in the program more than $5 billion in accessibility improvements, such as the installation of elevators and ramps at 70 New York City subway stations and seven Long Island Rail Road stations.

Under a recent settlement to a lawsuit filed by disabled railroad riders, the LIRR agreed to install elevators at three more stations on the Babylon line. Many more subway and railroad stations were in line for elevator replacements.

But the financial crisis brought on by COVID-19 has decimated the agency’s key revenue streams of fare and toll dollars, and dedicated tax receipts. MTA officials are holding out hope that the federal government will come through with a financial bailout in this next proposed stimulus package.

“If we don’t get the help from Washington, we’re not going to be able to accomplish everything that was set out in the Capital Program,” MTA chief development officer Janno Lieber said at an event Monday commemorating the 30th anniversary of the passage of the Americans with Disabilities Act. “Accessibility will always remain a priority of the MTA, whatever the size of our Capital Program. But it’s clearly going to impact the scope of what we’re able to do.”

For disability rights advocates, the coronavirus stands as the MTA’s latest justification for putting off improvements that should have been made years ago.

“It’s always an excuse. Something always happens,” said Marilyn Tucci, an outreach coordinator for the Suffolk Independent Living Organization, one of the plaintiffs in the 2018 federal lawsuit calling for the installation of elevators at Amityville, Lindenhurst and Copiague stations.

The lawsuit settlement reached in July calls for some accessibility upgrades, including to curbs and bathrooms, to be made by next year, and for the elevators to be installed by 2023. But the settlement also allows special consideration for pandemic-related funding issues that could impact LIRR officials’ “ability to fulfill their obligations under this agreement.”

"It is acknowledged in the settlement agreement that defendants may not be able to meet all of the prescribed deadlines due to COVID-19-related funding or other issues,” LIRR spokeswoman Meredith Daniels said. “There is serious financial uncertainty at the MTA requiring a pause on new awards and potential reductions of the scope of our historic 2020-2024 Capital Program. We urge all our partners, advocates and elected officials to join our call for this urgently needed federal funding so we can make good on our promise to deliver LIRR station accessibility upgrades.”

David Abrams, one of the plaintiffs’ attorneys in the suit, said it is “very disheartening” and “very upsetting” that the MTA could, once again, put much-needed accessibility improvements on the back burner.

“In the grand scheme of the MTA’s capital budget, as we understand it, we’re talking about a small blip in the cost,” said Abrams, a partner in the law firm of Kasowitz Benson Torres, representing plaintiffs. “It’s really critical that the MTA and the LIRR step up here and do what they are required and obligated to do for riders with disabilities, and what they agreed to do. . . . This has taken way too long.”

Another plaintiff in the suit, wheelchair user Gina Barbara of Wantagh, is undeterred by the potential for a pandemic-related delay to the upgrades — confident that the railroad will be obligated to eventually comply with the court-ordered improvements.

“I’m totally OK with the fact of waiting, as long as it’s going to get done,” said Barbara, who believes it shouldn’t have taken a federal lawsuit for the railroad to address its accessibility problems. “They don’t realize what it feels like to be in the position of a person with a disability, and being still treated today, after the ADA, as a second-class citizen, where we have to fight for everything we need.”