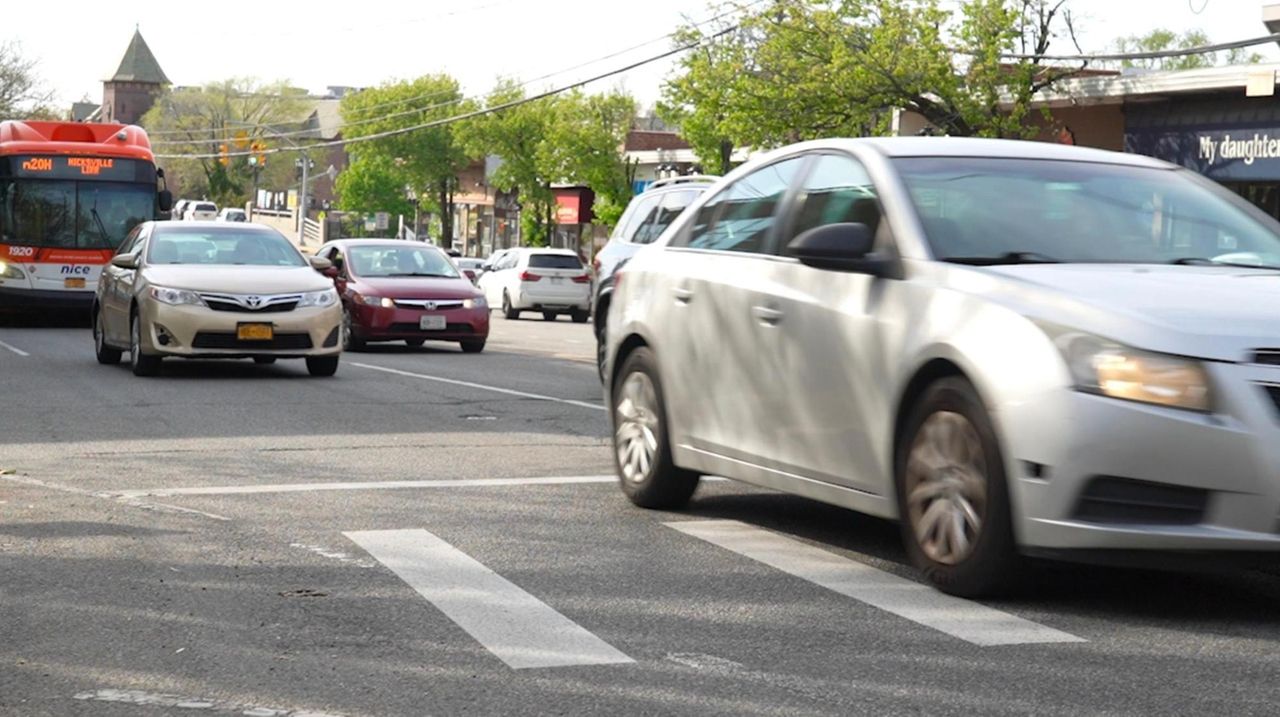 A Newsday analysis found that Long Island’s car-filled roads are some of the most dangerous to walk or bike on in the state. Jivanna Bennaeim, whose husband was struck and killed by a car in 2016, says things need to change to save lives. Newsday's Chelsea Irizarry has more.  Credit: Corey Sipkin; Kendall Rodriguez; Photo Credit: Bennaeim family

Long Island roads are among the deadliest to walk and bike on in the state, but few drivers involved in crashes that kill pedestrians and bicyclists face criminal charges, a Newsday data analysis found.

At least 135 pedestrians and cyclists died after drivers hit them in Nassau and Suffolk counties in 2019 and 2020, according to the analysis of preliminary data from the Albany-based Institute for Traffic Safety Management and Research. The Nassau and Suffolk district attorneys have prosecuted 20 of the drivers, according to their offices, making a combined prosecution rate of about 15%.

Excluding crashes in which environmental conditions or pedestrian or bicyclist error played a role, the prosecution rate was around 30%.

At least 135 pedestrians and cyclists died after they were hit by vehicles in Nassau and Suffolk counties in 2019 and 2020, according to a Newsday analysis of preliminary data.

Nassau and Suffolk district attorneys have prosecuted 20 of the drivers involved, according to their offices — a combined rate of 15%.

Marco Conner DiAquoi, deputy director of Transportation Alternatives, a Manhattan-based advocacy group, said Long Island's prosecution levels in such cases are likely similar to rates elsewhere in New York and nationwide. The New York State Division of Criminal Justice Services, U.S. Department of Justice and state and federal departments of transportation said their agencies do not track the number of cases prosecutors bring against drivers who kill pedestrians or cyclists.

"You don’t realize a car is a weapon until you’ve seen the damage it can do to a person," said Jivanna Bennaeim, of Great Neck, whose husband was killed by a hit-and-run driver while crossing a street in Great Neck Plaza on Sept. 30, 2016.

Bennaeim said the collision threw her husband, Oren Bennaeim, 43, headfirst onto the pavement, causing a traumatic brain injury that left him in a coma for a week before he died. The driver was never caught, she said.

"It’s awful what we went through," Jivanna Bennaeim said of herself and her 17-year-old son. "We don’t want anyone else to have to go through it."

The data lists pedestrian or cyclist error or confusion as a contributing factor in 38% of the crashes. Environmental conditions such as slippery pavement played a role in 13%. Factors such as driver distraction, failure to yield the right of way and speeding were factors in 49%.

The Suffolk County District Attorney's Office brought cases against 13 drivers for killing pedestrians or cyclists in 2019 and 2020 — a prosecution rate of 18%. The rate was 11% in Nassau, where seven drivers have faced charges. There are active investigations into three other fatal car crashes in Nassau in those years, according to the district attorney's office.

Of the 20 cases brought, all but one involved charges for leaving the scene of a crash or driving after drinking or doing drugs. Eight cases are pending, while 12 resulted in guilty pleas.

Officials say it's difficult to prosecute

Maureen McCormick, executive assistant district attorney in the Nassau County District Attorney’s Office and its former Vehicular Crimes Bureau chief, said it is difficult to successfully prosecute drivers who are sober and remain at the scene.

While New York State law includes statutes such as Aggravated Vehicular Homicide and Assault, and Vehicular Manslaughter and Assault, they only apply to drivers under the influence of alcohol or drugs.

Prosecutors can bring other charges against drivers, including criminally negligent homicide, manslaughter and reckless diving. But courts have required prosecutors to prove increasingly high levels of culpability to win convictions, McCormick said.

"The court is making it harder and harder to bring charges," she said.

McCormick gave as an example the "rule of two," an informal judicial precedent that requires prosecutors to prove two moving violations or acts of negligence occurred to demonstrate that a driver was criminally negligent. The rule is not codified in any state law, but emerged from court decisions over recent decades. Traffic safety advocates said it makes it unreasonably hard to prosecute drivers in car crashes that cause injuries or death.

She added that sometimes pedestrians are at fault, by crossing a street outside a crosswalk while looking at their phones, for example.

Brendan Ahern, deputy division chief of the trial division of the Suffolk district attorney’s office, acknowledged that obtaining convictions has become increasingly difficult over the years, particularly in cases that do not involve drugs or alcohol.

To obtain a complete picture of a crash, the DA’s office has in place an on-call system in which a prosecutor goes directly to the scene of a crash where a pedestrian or cyclist was killed or seriously injured. That team operates 24/7, Ahern said.

"We’re taking the steps necessary to create clarity on these cases," he said.

Ahern said the courts also look at the issue of "moral blameworthiness," meaning the degree to which the driver understood the risk they were creating.

William Kephart, a Garden City attorney who has defended drivers in a dozen fatal car crash cases on Long Island, said both counties have become more aggressive in pursuing criminal charges against drivers.

"It doesn’t come from a lack of interest on the DA's end," Kephart said of the prosecution rate. He previously worked in the Nassau district attorney’s office.

A 2015 report by Transportation Alternatives, which advocates for better biking, walking and public transit options, found that New York City district attorneys bring homicide charges against fewer than 7% of drivers who cause fatal crashes in the city. A 2019 report by transportation safety advocacy groups in Philadelphia found that drivers were charged in only 16% of crashes that killed bicyclists, pedestrians or motorcyclists.

DiAquoi and Daniel Flanzig, another transportation safety advocate, acknowledged the hurdles that prosecutors face in bringing cases against drivers. But they also argued the low prosecution rate reflects a pro-car bias in law enforcement and rejected the notion that all fatal crashes that do not trigger criminal charges are mere accidents.

"We consider traffic crashes ‘accidents,’ that nobody’s at fault, when in reality there’s probably conduct that could’ve been avoided and that could’ve saved a life," said Flanzig, a New York Bicycling Coalition board member and Mineola attorney who represents crash victims.

Distracted or aggressive driving, increasingly large and deadly personal vehicles, and streets designed for speed, not safety, are all crash factors within human control — not "acts of God," DiAquoi said. He cited statistics from the National Safety Council showing that more than 90% of car crashes nationwide involve human error.

John Corlett, director of public affairs and traffic safety services for AAA Northeast, connected Long Island’s rate of pedestrian deaths to the great number of vehicles in the region.

Acting Suffolk Police Commissioner Stuart Cameron said his department's efforts to reduce road fatalities have included adding a crash analyst in the highway patrol bureau. The analyst studies crash data so that the department can target traffic enforcement to the most critical times and places, and recommends infrastructure safety upgrades to other agencies.

Nassau County Police Commissioner Patrick Ryder said reducing crashes involving pedestrians and bicyclists is "of the utmost importance to the police department." He said the agency prioritizes enforcing vehicle and traffic laws and instructing drivers to "use extreme caution" and to yield to pedestrians and cyclists.

Transportation Alternatives is lobbying lawmakers in Albany to pass a package of bills aimed at reducing traffic injuries and deaths. One would seek to end the rule of two. Another would require information about vehicles for sale to include how dangerous they are to pedestrians and cyclists.

"Prosecutors have to take a chance and be more aggressive," he said. "If the public knows that they can be held criminally responsible for killing somebody in their car, hopeful that will curtail bad driving behavior."

Defense attorneys question whether it's necessary to expand road violence laws or appropriate to prosecute more drivers for killing pedestrians or cyclists.

"The laws are pretty sufficient," Kephart said. "My fear is you’re going to take an everyday person who has a lapse of judgment or perceives a situation erroneously, and that causes an accident, and now you’re going to call it criminal. That’s dangerous, that’s a dangerous slope to go down."

DiAquoi said the best solutions to road accidents are not in courtrooms but on streets themselves. Narrowing roadways to slow traffic, building protected bike lanes and pedestrian islands, and timing traffic signals to give pedestrians a head start before cars are among the measures have shown to make streets safer for everyone, he said.

That’s an approach favored by Bennaeim, a member of Families for Safe Streets, a New York advocacy group. She pushed for safety upgrades at the intersection where her husband was killed, and Nassau County received a state grant to carry them out. But in the more than four years since his death, no improvements have been made, she said.

"They still speed," she said of cars at the intersection. "It’s horrible to see. You shouldn’t have to be afraid to cross the street."

A Nassau spokesman said construction on the upgrades should begin this fall.