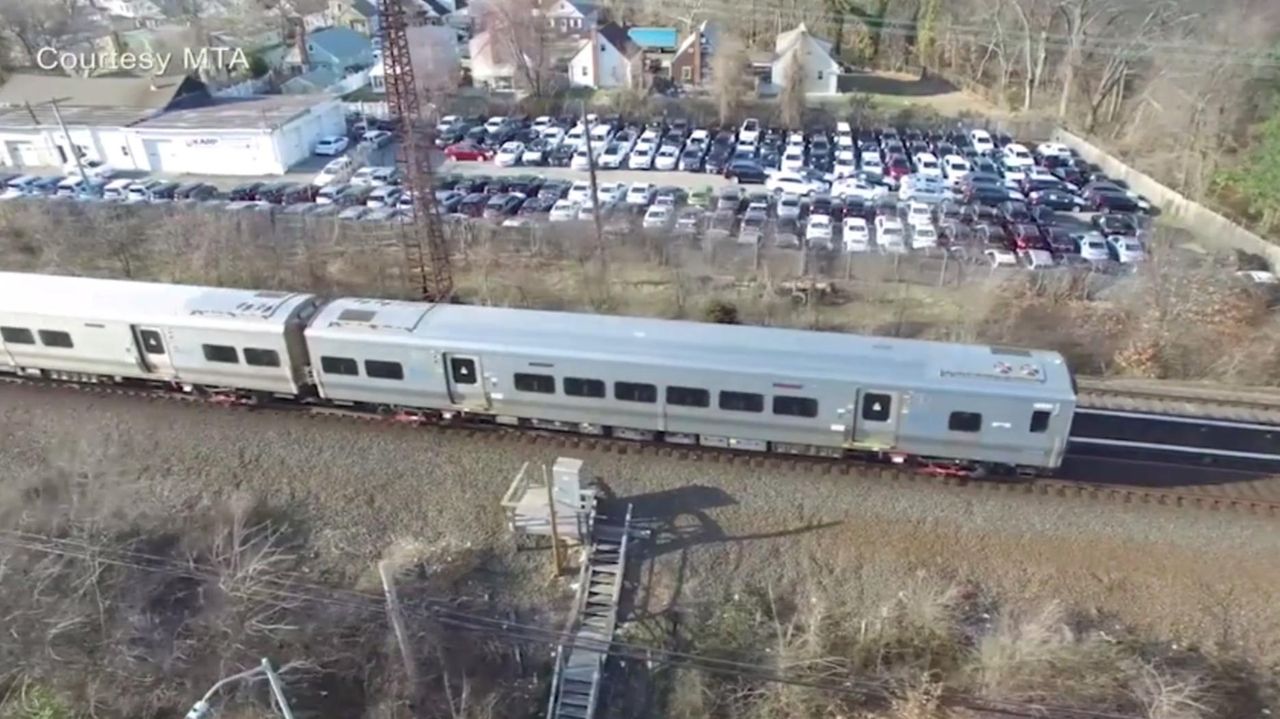 On Jan. 18, 2017 at Hofstra University, Suffolk County executive Steve Bellone backed the LIRR third track project and said the 9.8 miles of track are "pivotal" to the region. "If we can't build these 9.8 miles of track now, when a plan is on the table within the Long Island Rail Road right of way, then this may well be our last opportunity for a third track," Bellone said. Credit: Steve Pfost/ MTA

The Wednesday morning hearing at Hofstra University kicked off with Suffolk County Executive Steve Bellone speaking about the project’s potential to drive the kind of transit-oriented development that would allow Long Island to “retain and recruit the best young minds in the nation.”

“Whether or not we can construct these 9.8 miles of track will define whether we are a region that gets things done or whether we are a region of ‘no,’ ” Bellone said before a room of about 100 people. “If we can’t build these 9.8 miles of track now, when a plan is on the table within the Long Island Rail Road right of way, then this may well be our last opportunity for a third track.”

It was the third consecutive hearing dominated by voices of support, including those of the supervisors of the towns of Brookhaven, Babylon, Huntington and Smithtown, who all sent statements read by other speakers. Long Beach City Manager Jack Schnirman testified in person, as did Riverhead Town Supervisor Sean Walter.

Like Bellone, Walter said the project’s fate will determine whether Long Island is in “a period of decline” or “a period of growth.”

“I understand that there are other elected officials that may not want this project, but sometimes there are sacrifices that have to be made for the greater good,” Walter said.

An evening hearing also held at Hofstra, however, drew more project opponents than the earlier sessions. Among them was Garden City resident Karen Reiter, who said the Main Line’s proximity to homes, schools, churches, businesses and public spaces make it a bad fit for the proposed construction.

“The time has passed for railway expansion in this very densely populated area,” said Reiter, whose comments were met with boos and insults from some project supporters in the audience — most of them union laborers.

LIRR General Manager of Public Affairs Susan McGowan asked the audience “to allow the speakers to speak unimpeded. Everybody has a point of view.”

LIRR: Your chance to speak on 3rd rail

The project, proposed by Gov. Andrew M. Cuomo a year ago, would construct a third track between Floral Park and Hicksville within the LIRR’s existing property. Project officials say the extra track will dramatically improve the LIRR’s service reliability and provide the necessary capacity to move riders in the opposite direction during peak hours.

Unlike past third track proposals, the new effort does not require taking residential properties, although some businesses will have to be relocated as part of a plan to eliminate seven grade crossings along the project corridor.

The plan has garnered widespread support among Long Island businesses, planning groups and laborers, but still faces opposition from some residents who live near the Main Line and would be most impacted by construction, which project officials say would last three to four years.

Floral Park resident Roxanne Mahler said that while she understands “the need for progress,” she still had several unanswered questions including, “at what cost to Main Line communities and businesses, where’s the funding and who’s paying for this?”

Mahler, whose house abuts the north side of the Main Line tracks, said she has several concerns about the construction phase, including noise, vibrations, contaminated soil and road closures impacting emergency response times.