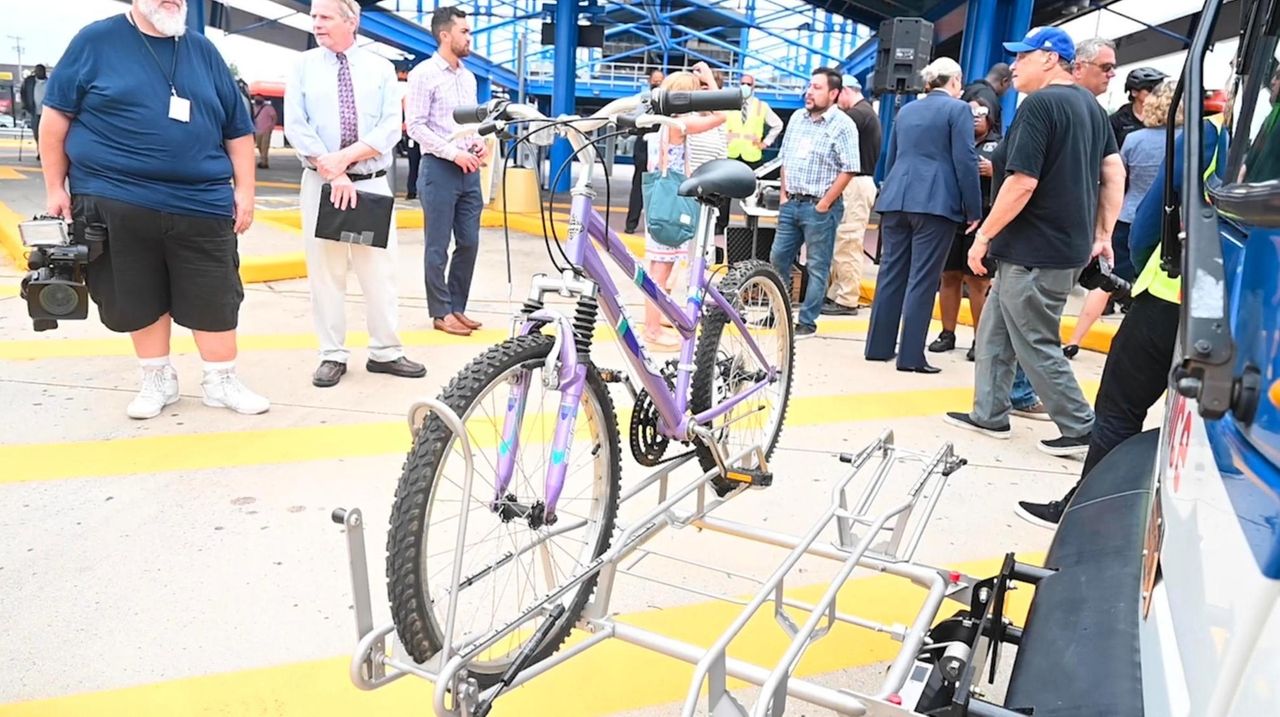 Riders are returning to Nassau buses in big numbers, and some can now bring their bicycles along, county officials said Monday.

Nassau County Executive Laura Curran on Monday announced the launch of NICE’s Bike & Ride program, which is outfitting six buses with front-mounted bike racks that can be used by passengers at no additional cost.

"This new amenity supports our county’s ongoing efforts to provide more options for cycling," Curran said at a news conference at the Rosa Parks Transit Center in Hempstead. "We know that we’re a car culture here on Long Island, but we’re doing what we can with what we’ve got to provide amenities for bicyclists."

After dropping to about 33% of pre-pandemic levels, ridership on the Nassau Inter County Express, or NICE Bus, system is back to around 72%, officials said, with some of the largest growth coming on weekends and in intra-county travel.

"Our assumption there is that those are more trips to the restaurants, trips to the shopping mall — those types of trips," said NICE chief executive Jack Khzouz, who hopes the racks will further encourage potential customers to give NICE a try. "It’s all about being creative and giving customers options and giving them reasons to ride public transit."

In the first phase of the program, the six buses have been fitted with the racks, which can hold two adult-sized bicycles, and also can be used for children’s or motorized bicycles. On weekdays, the buses will be run on NICE’s N6xpress route, which links Hempstead to Jamaica, Queens. On weekends, the buses will serve routes going to and from Jones Beach.

Passengers will be responsible for loading and unloading their own bikes, and can get directions on doing so on NICE’s website, nicebus.com.

Khzouz said the initial pilot program was funded through $8,000 in federal grants. He said NICE expects to gradually expand the use of bike racks across its fleet, but does not have a timeline or estimated cost for doing so.

While applauding the new program, Daniel Flanzig, board member of the New York Bicycling Coalition, noted that Nassau is well behind other regions in embracing cycling as a means of expanding a transit network. Suffolk has included front-mounted bike racks on its buses for more than a decade.

"If you leave the state of New York, this is a very common sight to see in front of buses," said Flanzig, who noted that bike racks can attract potential commuters by giving them a new option to travel that "last mile" to the office or their home.

Flanzig, a Mineola attorney, said he’d like to see the county more aggressively promote cycling, including by installing the racks on more of its fleet of 226 buses.

"I wouldn’t call it a turning point. It’s six buses. But it’s a move in the right direction," Flanzig said.

Although bike racks long had been considered in Nassau, Khzouz said they were behind other priorities for the bus system, including various technological upgrades.