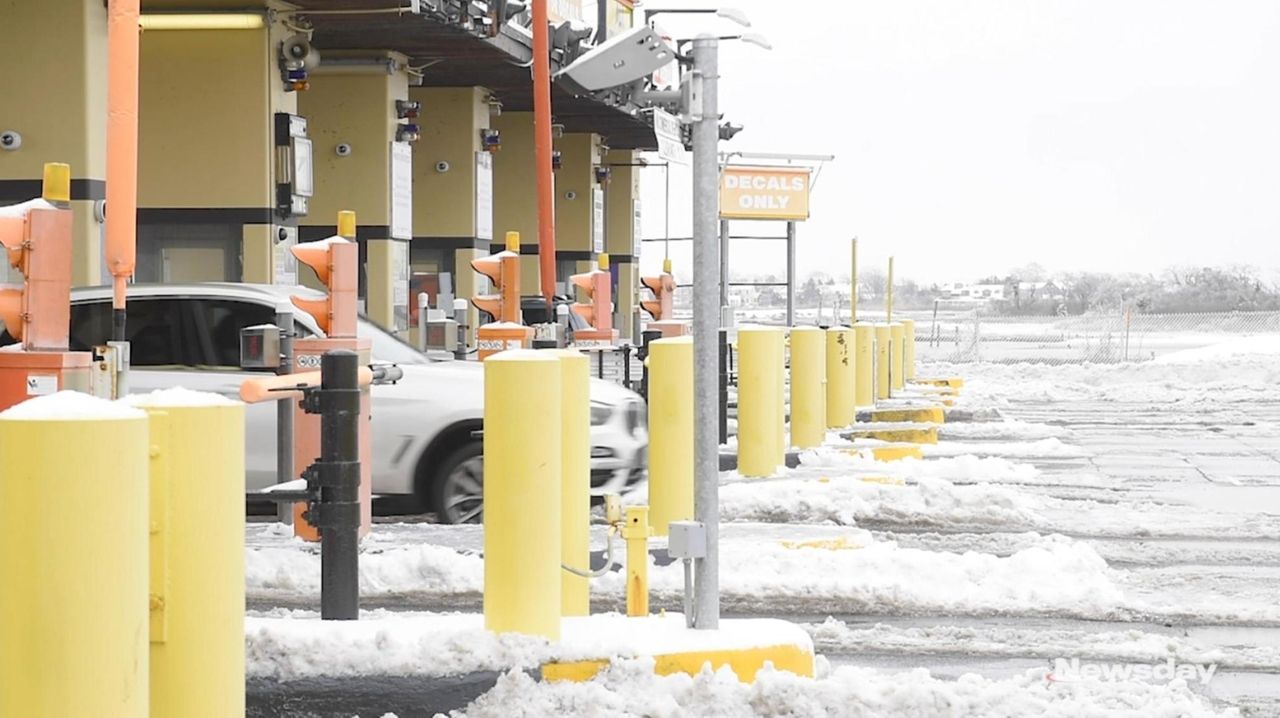 Vincent Grasso, executive director of the Nassau County Bridge Authority, on Friday talked about the new cashless tolling that is being tested at the Atlantic Beach Bridge. Credit: Johnny Milano

Two clocks hang from the toll booth plaza at the Atlantic Beach Bridge, sandwiched between signs reading "CORRECT TIME." Both are broken.

The frozen timepieces are as good a symbol as any for the drawbridge that crosses a narrow channel in the southwest corner of Long Island, connecting Atlantic Beach to Lawrence.

As transportation agencies nationwide install cashless tolling technology to make getting around faster and easier, the Atlantic Beach Bridge has defied the trend, becoming the only toll bridge in the New York City region not to accept E-ZPass. Every day, motorists traveling in both directions still line up at the ancient toll plaza, fishing through glove compartments for rumpled dollar bills to hand to booth operators.

Perhaps not for long, however. The Nassau County Bridge Authority, which runs the bridge, is testing new license plate reader technology that allows motorists to cross without having to stop and pay cash. Around 6 million vehicles cross the bridge annually.

The authority has cameras set up on one lane in each direction and ultimately might install them on all of the toll plaza's 10 lanes. It is even considering demolishing the plaza and building something new in its place.

Such changes would represent major steps for the agency, which for decades was lambasted by lawmakers and auditors alike as a political patronage mill that had outlived its purpose. The authority at one point employed close to 100 people, whose sole responsibility was running the single quarter-mile drawbridge. And although the authority in 1975 paid off the bridge's original construction bonds — the reason for charging tolls after the bridge opened in the early 1950s — it has continued to collect the loose change and dollar bills of Long Islanders nevertheless.

Authority leaders said they have turned things around in recent years, instituting good-government reforms that have trimmed the agency into a leaner, more efficient operation. The authority’s bond rating has improved, it runs large annual surpluses, it has not raised tolls in 14 years, and it has whittled staff to 34 people.

"The authority is a model government," authority chairman James Vilardi said in an interview.

Top among the innovations are the ongoing cashless tolling experiments. The agency spent $84,000 to install cameras on the bridge’s two cash lanes last May, along with supporting software. Through the new system, if a motorist doesn’t have $2 to pay the toll, a bill comes in the mail later.

Motorists with prepaid decals or toll cards can still cross the bridge without paying cash.

If all goes smoothly, the authority might expand the camera technology to the other lanes within the next few years, for a total estimated cost of around $300,000. If that happens, authority executive director Vincent Grasso said, toll booth operators would not be laid off but transitioned into other roles.

Innovations aside, some remnants of the old state of affairs remain. Staffing costs still make up around two-thirds of operating expenses. Vilardi is the latest in a string of Republican leaders from the Inwood-North Lawrence area with direct or indirect influence at the authority. And the bridge still does not accept E-ZPass, the electronic tolling technology that enables motorists to drive from Maine to North Carolina without having to pay a cash toll — so long as they avoid the Atlantic Beach Bridge.

Grasso said officials have considered implementing E-ZPass. But between annual dues, installation costs and transaction fees, they determined it would be too expensive.

The Atlantic Beach Bridge is not the sole holdout, according to E-ZPass executive director PJ Wilkins, who said there are other small bridges in E-ZPass service areas that have resisted the technology.

"That’s fine," Wilkins said. "There’s a place for everybody in this ecosystem."

E-ZPass or not, the prospect of a cashless tolling system on the Atlantic Beach Bridge was welcome news to some locals.

"They should do that," Mike Dervovic said from his restaurant at the Atlantic Beach end of the bridge. Dervovic said long lines of cars waiting to pay cash, or drivers stuck in the wrong lane, are common sights at the toll plaza, especially when nearby beaches are open.

"The days of searching your car high and low in a panic to find $2 to get on the barrier island are over," he said.