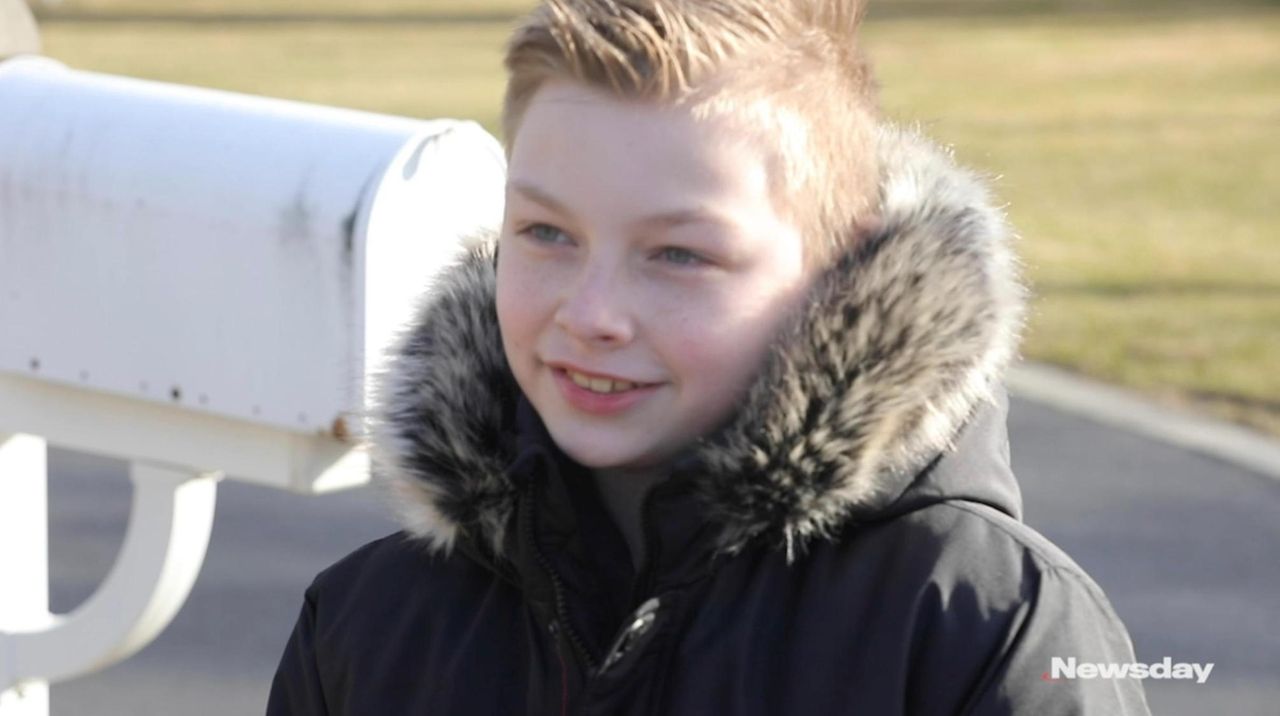 Though Dr. Anthony Fauci appeared as a speaker at the MTA's virtual board meeting on Thursday, Lukas Wolpiuk, a 12-year-old from Centereach stole the show. Lukas, who is laser-focused on train talk, called in to discuss train fares, parking tolls, and other issues of which he thinks the MTA needs to be aware.  Credit: Newsday / Reece T. Williams; MTA; Photo credit: Marzena Wolpiuk

While Lukas Wolpiuk's friends spend their free time playing Fortnite and Roblox, the 12-year-old from Centereach pores over MTA budgets and board meeting minutes, and develops proposals to reduce costs for Long Island straphangers.

"I just really like trains. Ever since my grandma took me on the M train," Lukas said Friday. "I just fell in love with it."

The Dawnwood Middle School seventh-grader wowed listeners when he brought his ideas to MTA leadership Thursday during the agency's monthly board meeting, speaking via Zoom from his bedroom during the public comment session about parking discounts, shuttle buses allocation and holding the line on fare increases.

"I think they have made the right move," he said during the meeting, of the MTA's decision to delay a planned fare increase, citing the coronavirus pandemic. "People will switch from driving to taking mass transit."

But Lukas wasn't done. He detailed his concerns with a potential bridge and tunnel fare hike; suggested that weekend closures on the LIRR’s Main Line should include more shuttle buses, and proposed discounts for regular riders using a new LIRR parking garage in Westbury.

"If you look at how much this would cost if you rode the Long Island Rail Road every weekday, you would pay around $120," he said of the daily parking cost. "I think that there should be a monthly pass that would have a discount of $10 or $20."

The transit prodigy even chided MTA officials for releasing this month’s board meeting materials later than usual.

Lukas' knowledge got the attention of the leader of the nation's largest transit system.

"Highlight of my morning, I gotta find that kid," tweeted Sarah Feinberg, the interim president of New York City Transit.

Lukas said he began watching MTA meetings during the start of the pandemic last year, tuning in after school and during his lunch break.

During last month's MTA Board meeting, he was too shy to ask a question and got his mother, Marzena Wolpiuk, to deliver comments on his behalf. But she refused to act as his surrogate again, telling Lukas this week to serve as his own messenger to the MTA.

"I wanted to stand up for what's right," Lukas said of his public comments. "I just want things to be fair for all riders."

As for the MTA, Lukas doesn't mince words.

"They shouldn't even be considering raising fares at all because of the pandemic," he said.

Marzena Wolpiuk said her son has been fascinated with trains ever since he was a baby.

"His grandma used to take him on the train, on buses and subways," she said. "Little boys like to play with these kinds of things. But nobody was expecting for this to become a passion. I personally don't get it. But he is so deep into MTA and everything transit that it amazes me."

Lukas, who occasionally rides the railroad with his mom into and out of Manhattan, said he's interested in engineering and the construction of major MTA projects such as the Second Avenue Subway and East Side Access.

While only in middle school, Lukas said he's already eyeing a career in transit, potentially with Amtrak, and is looking at attending Penn State Altoona for its rail transportation engineering program.

"He's an A-plus student winning all kinds of awards," Marzena Wolpiuk said. "He does great in math and science. This kid amazes me."