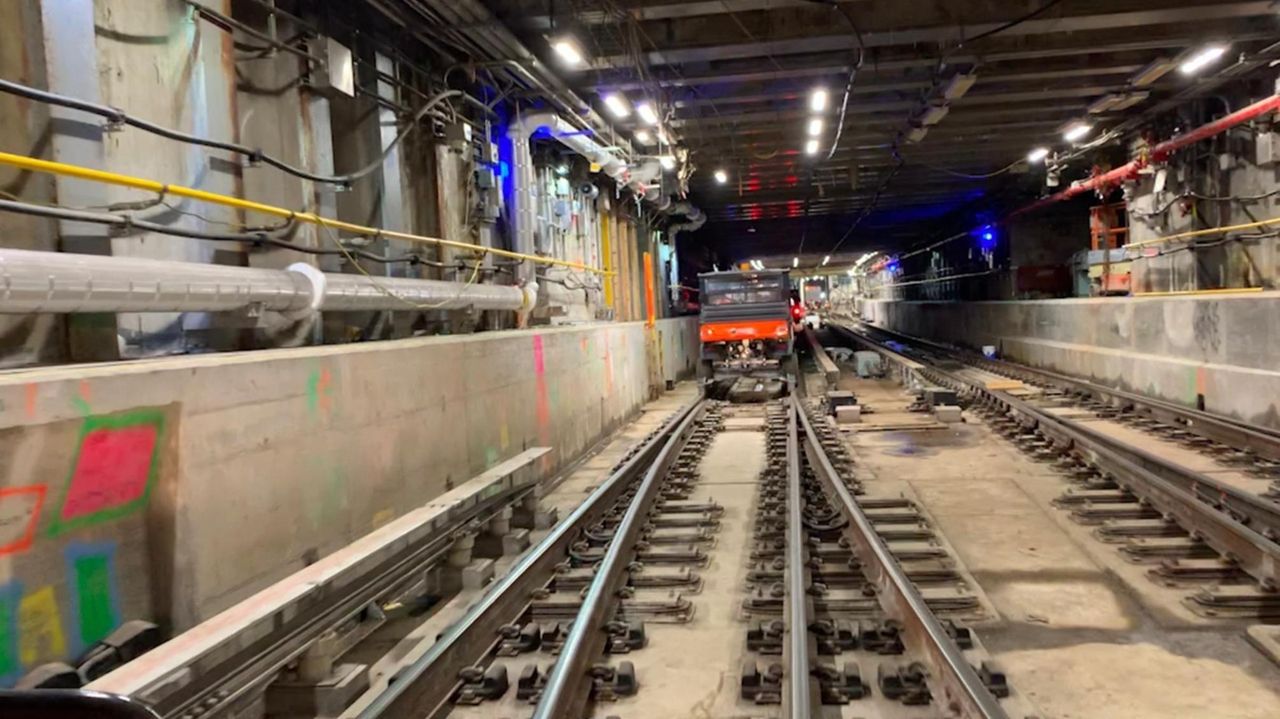 A year and a half from the opening of East Side Access, it's unclear who will maintain the tracks and signals at the LIRR's Manhattan terminal and in the tunnels linking to it. Newsday transit reporter Alfonso Castillo has more on this story. Credit: Newsday / Alfonso Castillo; Craig Ruttle

Long Island Rail Road labor leaders are balking at an MTA proposal to hire outside contractors to run the LIRR’s new East Side Access terminal in Manhattan, a plan they say would deny jobs to their union workers and create a new layer of bureaucracy at the transit agency.

The Metropolitan Transportation Authority is considering creating a subsidiary agency — separate from the LIRR — to operate East Side Access, which is scheduled to open late next year. The $11.1 billion project will create a second link to Manhattan for the LIRR via eight miles of new tunnels, potentially reducing Long Islanders’ commutes by 40 minutes each day.

The MTA is considering creating a “special purpose entity,” separate from the Long Island Rail Road, to operate East Side Access — the LIRR’s new link to Grand Central Terminal scheduled to open in December 2022. The move could save the MTA tens of millions of dollars, according to MTA officials.

The MTA is looking to staff the new agency with private contractors, who could be in charge of everything from running the new 350,000-square-foot terminal and its retail stores to repairing and maintaining tracks and signals.

LIRR union officials say their members are best qualified to do the track work, and that creating a new agency will just add an extra layer of MTA bureaucracy. A possible resolution could see LIRR workers maintain the tracks, and private contractors manage the new Manhattan station.

Although the responsibilities of a new agency are yet to be decided, the MTA, in a request for proposals issued in March for private bidders, said it is looking for "one or more qualified service providers to operate and maintain infrastructure and related structures supporting" the LIRR’s new link to Grand Central Terminal.

The new agency’s oversight could include "maintenance and operations" of the 350,000-square-foot passenger terminal, and of "rail infrastructure," according to MTA documents.

It’s the latter that has raised concerns among LIRR labor leaders, who expected the responsibility of maintaining and repairing the tracks, switches and signals inside the new terminal, and in the tunnels leading into them, would go to their members.

"It totally caught me off guard," said Christopher Natale, general chairman of the Brotherhood of Railroad Signalmen Local 56, which represents LIRR signal workers. "Why give up a property that we spent billions of dollars on to a third party that we don’t even know who they are?"

MTA officials, whose aim in creating the agency is to save money, said they intend to negotiate with unions to determine the potential role of LIRR workers.

"When we open the long-awaited East Side Access facility in 2022, we want to ensure New Yorkers get the first-class operation they deserve, similar to the new Moynihan Station and other top-tier facilities nationwide," MTA spokesman Kenneth Lovett said. "We are negotiating with our labor partners to get that done."

Because the newly created tracks and station are not part of the LIRR’s territory, the MTA — the agency in charge of the railroad and of the project — has some leeway in its governance, and in the work rules and pay structure that would apply to the people who maintain them. Setting up an agency to operate East Side Access also could allow the MTA to avoid tens of millions of dollars in costs associated with being regulated by the Federal Railroad Administration, MTA officials said.

In the absence of the MTA appointing a specific agency to be responsible for East Side Access, the FRA could designate the entire MTA as a "railroad," opening up the authority to new financial liabilities, including federal pensions for workers, MTA officials said.

East Side Access — dubbed by Gov. Andrew M. Cuomo as the "single most ambitious" and "most difficult" transportation project in the nation — wrapped up major construction in May, 14 years after it began.

LIRR labor leaders are skeptical of the MTA’s claims that outsourcing the operation would result in any significant savings and have suggested creating an agency would only contribute to what they say already is a bloated management structure. According to MTA data, the authority employs about three managers or supervisors for every 13 hourly workers.

Union officials also questioned the MTA's ability to attract, hire and train outside workers on the LIRR’s highly specialized infrastructure over the next 17 months.

"You can’t just go and hire a contractor to do the work down there. The track, the signal, the third rail, all those mechanics — we’re qualified to do on Day One. We can come in tomorrow and just starting working down there," Simon said.

MTA officials said the creation of a subsidiary agency to oversee East Side Access is largely a clerical procedure and would not increase its management ranks. An existing MTA manager probably would be appointed to oversee the agency, which could hire private contractors to carry out the work. The MTA’s request for proposal estimated the cost of the contract at more than $100 million.

The MTA Board was originally set to consider the creation of the "special purpose entity" overseeing East Side Access last month, but put off the vote pending union negotiations.

MTA and union officials said one potential resolution could entail having LIRR’s workers maintain the track infrastructure, while hiring a contractor to manage the new terminal, including overseeing new shops and restaurants there — skills outside of the MTA’s areas of expertise. Nonmanagement workers would be unionized, MTA officials said. It would be a model similar to those in place in several transportation hubs, including Kennedy and LaGuardia airports.

Simon said such an arrangement could be "a way forward." But State Sen. James Gaughran (D-Northport) said the prospect of having an agency other than the LIRR in charge of any aspect of East Side Access "just doesn’t make any sense," and is rife with potential complications — especially when something goes wrong.

"I guarantee you we’d be hearing over and over again, ‘Sorry, we can’t do anything, because the contract doesn’t permit it,' " Gaughran said. "There would be no access. So if commuters call me and complain about delays, about a lack of cleanliness, about whatever it may be, I’d have no recourse for them."

Gaughran wants the State Legislature to discuss the proposed arrangement when it considers Cuomo’s recent nomination of a new MTA chairman and chief executive officer later this summer.