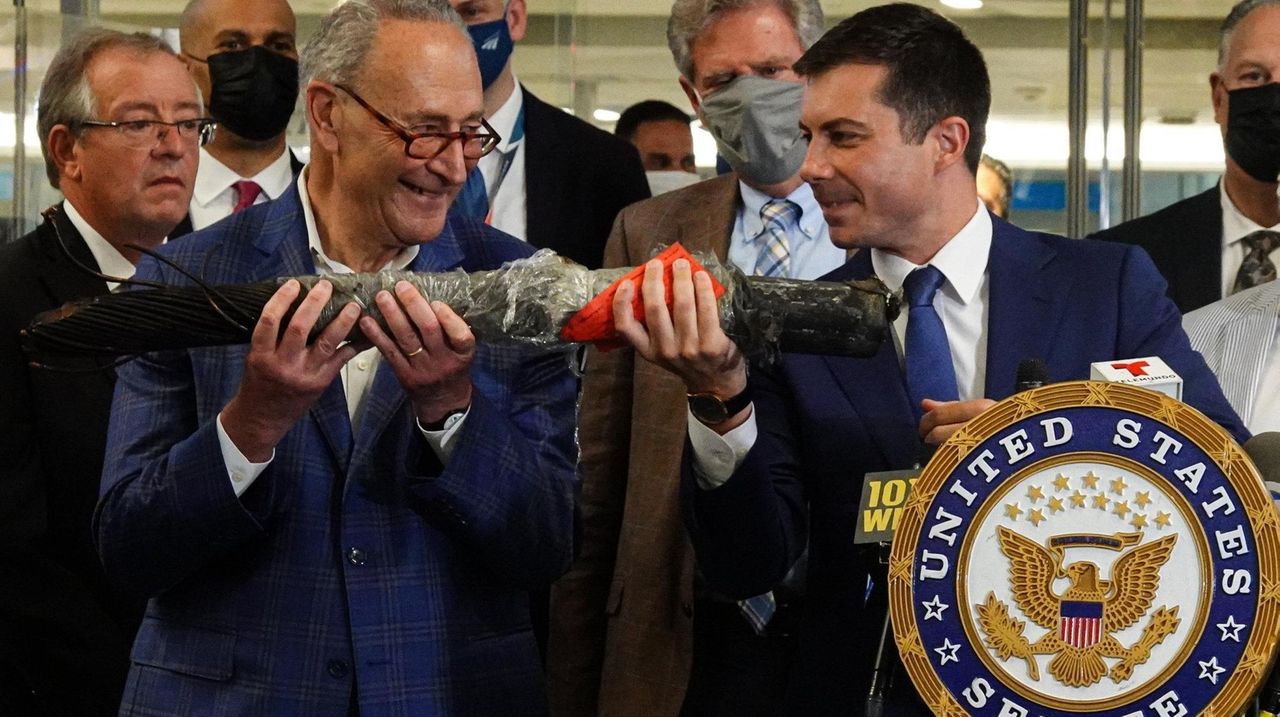 Sen. Chuck Schumer (D-N.Y.) called the Gateway Tunnel essential to the economies of New York, New Jersey, the Northeast and the U.S. "We don't have that much time," he said Monday at a Penn Station news conference that included U.S. Transportation Secretary Pete Buttigieg. Credit: Marcus Santos

The nation’s top transportation official on Monday got his first look at some of the aging rail tunnels linking Penn Station, and vowed to clear the path to repair them — and build new ones.

Gateway, first proposed a decade ago, would construct a 2.5-mile tunnel linking Manhattan's Penn Station to New Jersey, and also rehabilitate a 110-year-old tunnel across the Hudson River that was badly damaged by Superstorm Sandy. The two projects total about $11.6 billion.

"It's one thing to hear about it. It's another thing to see it," said Buttigieg, who described looking up inside the existing tunnel and seeing "concrete spalling" and "the rebar exposed under it."

"When you see these things, you understand what's at stake in getting this right," Buttigieg said during a news conference at Penn Station. "What we saw is … building techniques and transportation technology representing the absolute state of the art of 1910 … Now it is time to upgrade and secure this infrastructure for the 21st century."

The project is expected to be one of the centerpieces of Biden’s infrastructure initiative, which originally totaled $2 trillion, and earmarked $80 billion for rail projects.

A bipartisan compromise deal reached last week with Republican Senate members reduces the amount to $1.2 trillion, with $66 billion set aside for rail projects. Even with the reduced amount, Schumer said the package will provide "the billions of dollars we need to build Gateway."

"And Secretary Buttigieg has pledged to remove all the bureaucratic and other barriers. So, once we allocate that money, once we appropriate that money, things will move very quickly," said Schumer, who warned of the potential for the existing tunnels to fail. "We have no choice but to move quickly."

Schumer also spoke of the potential for the new infrastructure dollars to support other transportation projects in the region, including the rehabilitation of the East River Tunnels linking to Penn Station and used daily by the Long Island Rail Road. They, too, were severely damaged by Sandy.

Brian Fritsch, of the Regional Plan Association — a planning and transportation advocacy group — said commuters from throughout the region can benefit from Buttigieg seeing Penn Station’s antiquated infrastructure up close.

"Being able to really show him in person is extremely helpful for him to understand the conditions on the ground and what needs to happen," said Fritsch, who believes the benefits of Gateway extend far beyond those commuting across the Hudson. "If the tunnel were to shut down for an extended period … the traffic is just going to be horrendous for folks around the New York City region, including out onto Long Island."

Schumer said he expects construction to begin on Gateway by 2023, and take six or seven years to complete. One obstacle yet to be cleared is a disagreement with Gov. Andrew M. Cuomo on how to rehabilitate the existing tunnel.

Cuomo, who has pledged 25% of the funding for the project, favors a "repair-in-place" method that would entail patching and reinforcing the existing structures, rather than rebuilding them, and mounting new electrical cables on racks. The method would allow the work to be carried out primarily on nights and weekends.

Amtrak wants to shut down each of the two damaged Hudson River tunnels while they are repaired.

Marist poll: 59% of NYers say Cuomo should resign
3:14
AG report: Cuomo sexually harassed multiple women
These restaurants, businesses, colleges and NYC theaters will be requiring COVID-19 vaccines
'Sensitive' videos on race, sex, to be restricted in Smithtown schools
Long Beach Road flooding 'a problem for 30 to 60 years'
Faculty union at Stony Brook U. appeals for universal mask mandates
Didn’t find what you were looking for?