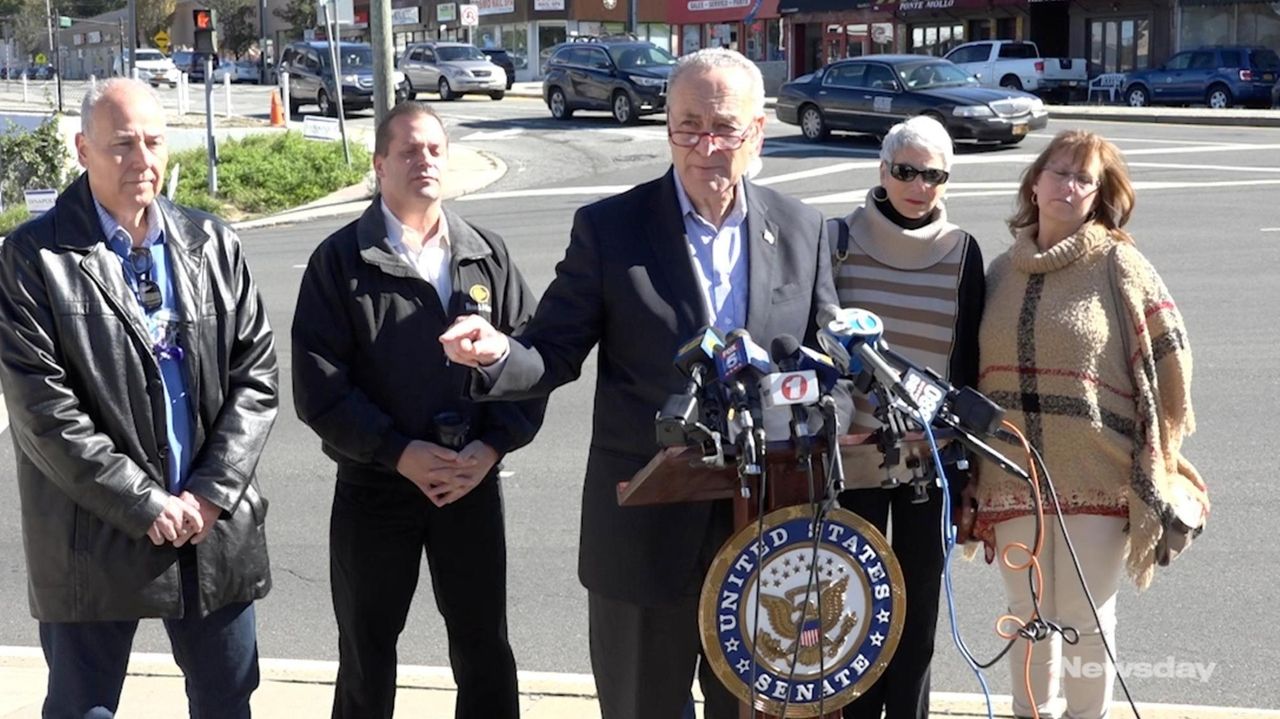 Sen. Chuck Schumer, at a news conference in Great Neck on Thursday, called on the federal government to enforce existing limousine regulations, including the classification of limousines carrying more than nine passengers as commercial vehicles.  Credit: Howard Schnapp

The supersized vehicles have been involved in several deadly New York crashes in the past few years, including on Suffolk's East End. Twenty people, including two pedestrians, were killed earlier this month when a modified 2001 Ford Excursion, packed with friends and family celebrating a 30th birthday, crashed in upstate New York, spurring renewed scrutiny of stretch limousines' safety.

At a news conference Thursday in Great Neck, Schumer (D-N.Y.) stood with the families of Brittney Schulman and Lauren Baruch, who were killed with two other women in a 2015 stretch limousine crash in Cutchogue, to call on the Federal Motor Carrier Safety Administration to enforce existing regulations, including the classification of limousines carrying more than nine passengers as commercial vehicles. He urged the FMCSA to review the licenses of all stretch limousine operators to ensure they meet their intended classification, or face cuts in the agency's Senate-approved funding.

Stretch limousines "have fallen through the cracks," Schumer said. "They are not cars. They are not buses. And so they don't get the kinds of regulations that we've had."

A provision of the Motor Carrier Safety Act mandates that drivers of stretch limousines with a capacity to carry more than nine passengers obtain a commercial license, which requires a higher level of knowledge, experience and training than standard driver's licenses. The limousines would also be subject to more rigorous inspection, repair and maintenance regulation if the vehicle is classified as commercial.

The drivers involved in the North Fork collision and the Oct. 6 stretch limousine crash in upstate Schoharie — the deadliest U.S. transportation accident in nearly a decade — did not have required CDL licenses, Schumer said.

"We don't need a new law," Schumer said, noting that some limousine operators are falsely advertising that they carry nine or fewer passengers to avoid the regulations. "We need enforcement of existing law."

The FMCSA did not respond to multiple requests for comment.

Paul Schulman of Smithtown, the father of Brittney Schulman, said oversight and regulatory changes are critical to make sure a similar tragedy never happens again.

"If this goes into effect, I'll know my daughter was taken for a reason," he said. "That laws that needed to be fixed and changed were changed."

On July 18, 2015, a stretch limo heading east on Route 48 in Cutchogue during a winery tour made a U-turn and was struck broadside by a pickup truck.  Lauren Baruch, 24, of Smithtown; Amy Grabina, 23, of Commack; Brittney Schulman, 23, of Smithtown; and Stephanie Belli, 23, of Kings Park, were killed and four others were injured.

The grand jury made a host of recommendations, including stricter licensing requirements for limousine drivers and better regulation of limousine construction by state agencies. But little was done to reform the industry, limousine company officials said.

Criminally negligent homicide charges against the limo driver were dismissed after a judge found the grand jury was improperly instructed on the law.

The state Department of Transportation did not respond to requests for comment.

After the Suffolk crash the victims’ families created an online petition called LABS — the first names of the four women killed — to bring attention to the dangers of stretch limousines.

"It's incomprehensible," said Steve Baruch, the father of Lauren Baruch. "We just hope that whatever can be done going forward will prevent something like this from ever happening again."

Last week, State Sen. Simcha Felder (D-Brooklyn), a Democrat who sits with the Republicans, introduced legislation that would require enhanced training standards for limousine drivers. The bill would also require stretch limousines to be retired after 10 years, carry a minimum liability insurance coverage of $2 million and mandate drivers place a sticker on their passenger door indicating the time of their last successful inspection.