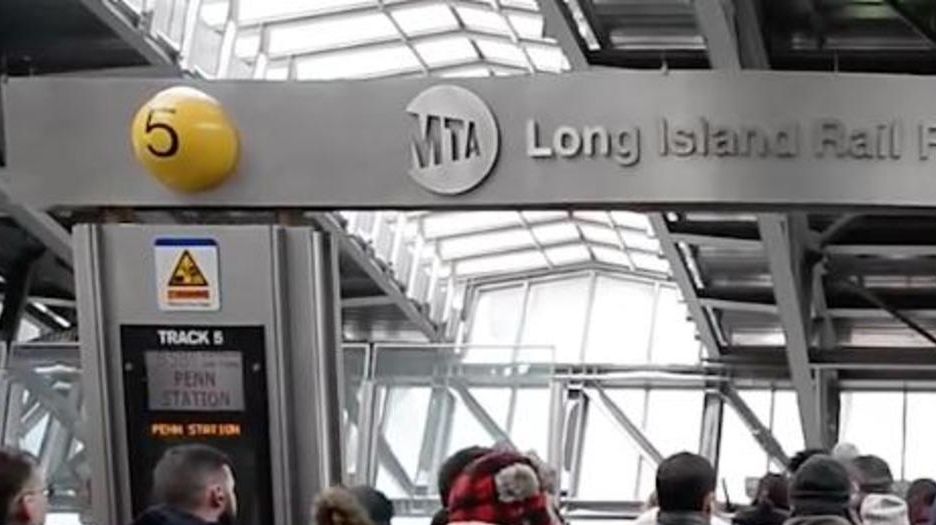 The LIRR, which on Monday, Jan. 8, 2018, began operating under a modified schedule to accommodate Amtrak's second round of track renewal work at Penn Station, reported that systemwide service was on or close to schedule after morning delays. Credit: Newsday / Scott Eidler; Corey Sipkin

Weather-related equipment problems, snowdrifts on the East End, cars stuck on the railroad tracks and a person struck and killed by a freight train all compounded frustrations felt by Long Island Rail Road commuters on the first day of planned service disruptions caused by Amtrak’s latest repair project at Penn Station.

Although Amtrak and LIRR officials assured riders that the impact of the project — a follow-up to the so-called “summer of hell” repairs last year — would be minimal, they came on a day riddled with other service issues, including widespread delays and unplanned cancellations both during the morning and evening rush hours.

Besides the two trains scheduled to be canceled because of the Penn Station repairs, the LIRR canceled nearly another two dozen trains throughout the day.

The LIRR blamed the morning service glitches on equipment problems that were “the ongoing effects of last week’s winter storm,” as well as on an automobile stuck on the tracks near Deer Park during the early morning hour. In addition, buses continued to replace trains between Greenport and Riverhead because of high snowdrifts.

How winter Penn work compares to 'Summer of Hell'

Maria Delgado, an acting student from Mount Sinai, said that, on top of being 20 minutes late, her Port Jefferson train was “subway crowded” with passengers standing in aisles and sitting on the floor. In the end, the delay caused her to miss her class, Delgado said.

“It was so annoying,” she said.

The evening rush hour also had delays and cancellations, including those caused by another car stuck on the tracks in Woodmere and by an earlier service suspension on the Oyster Bay, Huntington, Port Jefferson and Ronkonkoma lines after authorities said a freight train killed an “unauthorized person” on the tracks near Mineola.

The unexpected issues did not impact any morning trains whose schedules were affected by the Amtrak work, but some evening trains that were already impacted by the work experienced further disruptions.

“Just last week — even before the storm — I had two issues with my direct train to Penn and had to transfer at Jamaica,” said Calem Brown, 48, of Port Jefferson, as he waited at Penn Station for his train during the evening rush. “So I’m not confident at all.”

Amtrak and LIRR officials have assured customers that the follow-up to the summer work will have far less impact on customers — affecting about 5 percent of LIRR rush-hour trains, compared with about 20 percent during last summer’s project.

But some commuters and advocates have pointed out that the potential for unplanned disruptions that could compound service problems is far greater during winter months.

“I don’t know if they should do it this time of year because it’s difficult for people to stay outside longer with the cold weather,” said Dana Sali, of Albertson, as she waited for her Penn Station-bound train at Mineola, where dozens of commuters huddled inside the indoor waiting room to stay warm.

Amtrak officials have defended the timing of the work — saying the condition of the deteriorating infrastructure being replaced at Penn — including tracks 15 and 18 — makes the repairs urgent.

Mark Epstein, chairman of the LIRR Commuter Council, a rider advocacy group, pointed out that Amtrak’s repairs come as commuters in recent weeks have already dealt with several broken rails, construction-related weekend service suspensions, trains running with fewer cars than usual because of wheel repairs, inadequate snow removal at some stations, and malfunctioning heating systems on some trains.

And, although Amtrak has said it expects to wrap up its ongoing work by May 28, Epstein said he expects more disruptions to follow, as Amtrak continues to modernize the century-old Penn Station and also makes plans to repair superstorm Sandy damage inside the East River tunnels.

“It’s never-ending,” Epstein said. “We know it’s necessary work, but it’s a long haul for riders. It really is.”